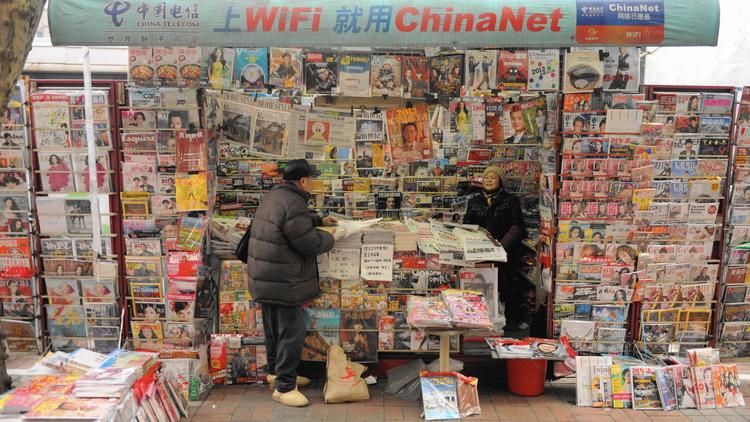 At The Guardian, Tom Phillips reports the firing of a Xinjiang newspaper editor over his public criticism of government policy in the region:

Zhao Xinwei, the editor of the state-run Xinjiang Daily newspaper, was removed from his job and expelled from the party after an investigation found him guilty of “improperly” discussing, and publicly opposing, government policy in China’s violence-stricken west.

The former editor’s “words and deeds” had gone against government attempts to rein in religious extremism and terrorism, the official China News Service agency reported on Monday.

[…] Zhao, who joined the party in 1984 and became the newspaper’s editor in 2011, had also been caught accepting bribes, wasting public money and “turning a deaf ear to wrongdoing” in his organisation, the report added.

Amnesty’s Nicholas Bequelin suggests that Zhao may have been targeted because of his affiliation with fallen domestic security chief Zhou Yongkang.

It is increasingly easy for journalists to find trouble without going as far as openly questioning the authorities or getting entangled in factional politics. At the Committee to Protect Journalists, Yaqiu Wang highlights new and harsher penalties for spreading “false news”:

China’s journalists and bloggers, already under threat of persecution, face new risks from Monday, when amendments to the country’s criminal law come into effect. Under the amendment, passed in August by legislative body the National People’s Congress, those convicted of spreading false news about disasters or epidemics will face harsh penalties.

The clause added to Article 291 threatens a prison sentence of up to seven years for fabricating false information related to “hazards, epidemics, disasters, and situations involving police” or intentionally disseminating such false information that causes “serious social disorder.”

[…] “Anti-rumormongering laws are never really about deterring the spread of rumors per se,” said a Chinese journalist, who asked to remain anonymous for fear of reprisal. The journalist showed CPJ a report widely shared in China this month that wrongfully reported the death of a famous songwriter. The story first appeared on social media, and many news organizations, including CCTV, reported on it. The journalist pointed out the lack of official reaction to the false news and told CPJ the Chinese government does not appear to care about the spread of false information that is not politically sensitive. “Anti-rumormongering laws are intended to deter people from saying things the government doesn’t like. It is to create an atmosphere of fear,” the journalist said. [Source]

Jason Q. Ng examined the government’s politicized battles against rumors at Foreign Affairs last month, zooming in on a key theme of his earlier Citizen Lab report on WeChat censorship:

Throughout modern Chinese history, rumor has been a flexible category that has included not only speculation and falsehoods but also unsanctioned opinions about contemporary events. During the Mao era, the historian Steve Smith has written, rumors were considered to be “any information or opinion at variance with the official construction of reality”—even when that information or opinion was mostly factual. That sensibility has since been codified through regulations such as the State Internet Information Office’s so-called WeChat Articles, which aim to prohibit non-government-approved Web users from posting political news items.

Rules like these allow Chinese officials to take a surprisingly expansive view of what constitutes malicious gossip. State media even compares rumors to drugs, illnesses, and weapons—used by China’s critics, of course, in their efforts to destabilize the country. It was on such grounds that Chinese authorities managed to justify the detention of scores of individuals for promoting “disorder” during China’s recent stock market fall—among them, one journalist who merely opined on possible government responses to the market volatility.

But there is more to China’s crackdown on rumormongering than a simple desire to curtail explicit or implicit criticism of the state. The crackdown is also a strategic attempt to reclaim the commanding heights of mass communication by denigrating unofficial news and commentary outlets, among them the growing number of Chinese bloggers who have millions of followers—making them as influential as some of China’s state newspapers or TV networks. And it is a strike against the potential use of rumors as a tool for political organizing. [Source]

Ng also discussed the article with Emily Parker at Parlio.