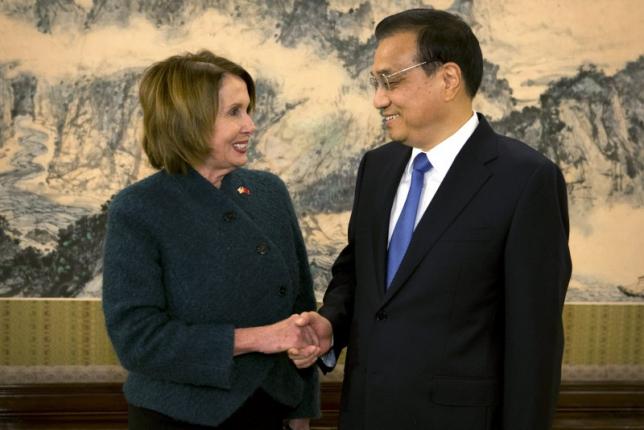 While in China last week, U.S. House Minority Leader and longtime critic of Beijing’s human rights record Nancy Pelosi led a Congressional delegation to Tibet. This was the first Congressional body allowed to visit the region since the 2008 crackdown on unrest in Lhasa and other Tibetan regions, and the trip had not been previously announced to reporters. At Reuters, Brenda Goh and Ben Blanchard report that Pelosi raised concerns about freedom of expression and religion in the region, and also highlighted the bipartisan support enjoyed by the Dalai Lama in the U.S.:

“The delegation reiterated the imperative of respect for religious freedom and expression in Tibet,” she added.

“We also conveyed to the Chinese government officials the strong, bipartisan support the Dalai Lama enjoys in the Congress of the United States and among the American people.”

[…] “America has a responsibility to stand up for human rights at home and abroad,” said Jim McGovern, the chairman of a Congress Human Rights Commission, who accompanied Pelosi.

“Human rights in China, and Tibet in particular, continue to be an area of grave concern,” he said in a statement.

[…] China’s Foreign Ministry has described the Tibet visit, which was not formally announced ahead of time, as “a normal exchange between the U.S. and Chinese legislatures”. [Source]

Ahead of the Congressional delegation’s visit, Tibet Party Chief Chen Quanguo last week announced that severe disciplinary action would be taken against any Party member suspected of secretly worshiping the Dalai Lama.

The New York Times’ Edward Wong reports on Chinese state media coverage of the visit, noting contrast between the words attributed to her and her earlier statements on Tibet:

Tibet Daily said that Chen Quanguo, the party chief, told Ms. Pelosi in a meeting on Tuesday that the United States should not support any separatist activities and should bar the Dalai Lama from visiting the United States.

The article also said that Ms. Pelosi had “highly praised” the “progress” in Tibet as well as the Chinese government’s efforts in “guaranteeing religious freedom, protecting ethnic culture and protecting the ecology and environment.”

As printed in Tibet Daily, Ms. Pelosi’s remarks are a sharp contrast to many of her earlier, critical statements on the situation in Tibet. Ms. Pelosi was attending official meetings in Beijing on Thursday and could not be reached for immediate comment.

In the past, official Chinese news organizations have incorrectly quoted prominent foreigners or selectively quoted them for propaganda purposes. [Source]

While Pelosi’s press release does not show praise of the level reported in state media, it does mention “the delegation  recognized China’s commitment to building infrastructure across China, including in Tibet, and addressing climate change.”

At the South China Morning Post, Zhuang Pinghui reports that the allowance of a Congressional visit represents a change in Beijing’s diplomatic approach to discussion of the sensitive region:

Sichuan University professor Luorongzandui, who knows members of the Chinese delegation that accompanied the US group, said Pelosi visited temples, schools and homes in Tibet, speaking to monks, nuns and residents. The itinerary was confirmed by both sides before the trip and the discussions covered “sensitive topics”, he said.

[…] “Pelosi has been hearing negative views about Tibet in the US, but here she had extensive contact with monks, nuns and was able to see them conducting religious activities freely and how Tibet has changed,” Luorongzandui said. “The central government is confident that Tibet has well developed under Beijing’s rule and it has every confidence in presenting it to the outside world. It is not enough to do so with state media only.”

[…] Jiang Zhaoyong, a commentator on ethnic affairs, said the visit reflected attempts by Beijing to improve communication with the West. “Beijing is working to improve understanding by those who criticise China’s policies on Tibet to let them have a personal look at Beijing’s efforts and the well-being of the Tibetan people, even though they may well still criticise policies after the visit.” [Source]