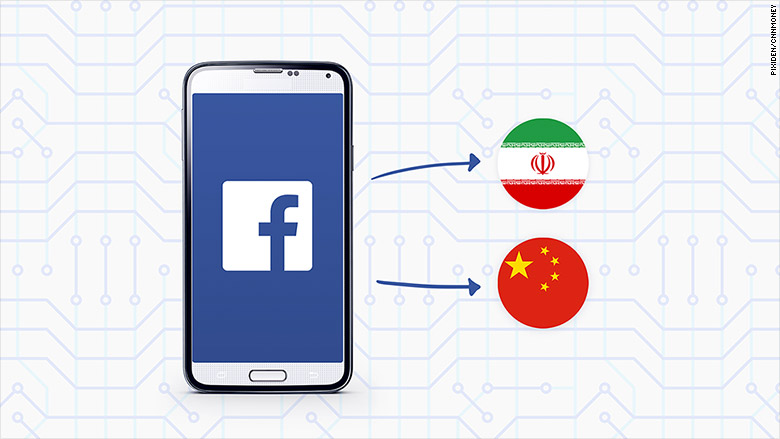 Facebook doesn’t say it updated the app specifically to reach people in China and Iran. But the new feature is able to circumvent censorship on cell phone networks — and that’s really only useful to people living under authoritarian regimes.

Starting this week, the mobile Facebook (FB, Tech30) app will pair up with the best online anonymity tool out there: Tor.

Tor is a system that encrypts and bounces Internet signals around the globe. It helps you evade censors when surfing the Web — and it hides your computer’s true location.

[…] There’s a mobile app for Tor, called Orbot. Facebook tweaked its Google (GOOGL, Tech30) Android app so that you can tap a button in settings, and the Facebook app will automatically use Orbot to connect to the Internet.

That encrypts the connection, hiding it from network censors. Then it bounces your signal to computer servers around the world several times, so that Facebook doesn’t even know your true location. [Source]

At The Atlantic, Kaveh Waddell looks at how Internet companies like Facebook and Google grapple with the tradeoffs and challenges that come with operating in countries that place restrictions on free speech.

Google’s move to pull the plug in China is an extreme example of the kinds of decisions Internet companies operating abroad are often up against: If they want to do business, they have to abide by local laws, which can include restrictions on speech. And since the United States has some of the most permissive freedom-of-speech laws in the world, American companies must adapt in order to do business even in parts of the world that are culturally very similar to the U.S.

[…] Rebecca MacKinnon, a prominent Internet-privacy advocate at New America, says companies should start thinking about how they will deal with free-speech issues even before they start doing business in a repressive state. “It’s about anticipating in advance what positions you’re going to be put in, and deciding in advance whether that’s an acceptable position to be in,” MacKinnon said. Many companies undergo a “human-rights impact assessment” before they expand to a new market with potential censorship pitfalls.

[…] Companies that do business abroad—even just in Europe—are dealing with an increasing number of government requests for content takedowns every year. Europe’s two-year old “right to be forgotten,” a European Union decision that allows citizens to ask Google to remove links to misleading, inaccurate, or irrelevant information about them, has opened a whole new category of content takedown requests. And growing worry that terrorist groups like the Islamic State are using social platforms to recruit and spread propaganda means that more governments are on the lookout for content that promotes terrorism, which typically violates platforms’ terms of service. [Source]

Google, which left China in 2010 after refusing to comply with government censorship requests, is making its way back into the world’s second-largest economy. Last November, the company announced its plans to launch its Play store in China by the end of this year.