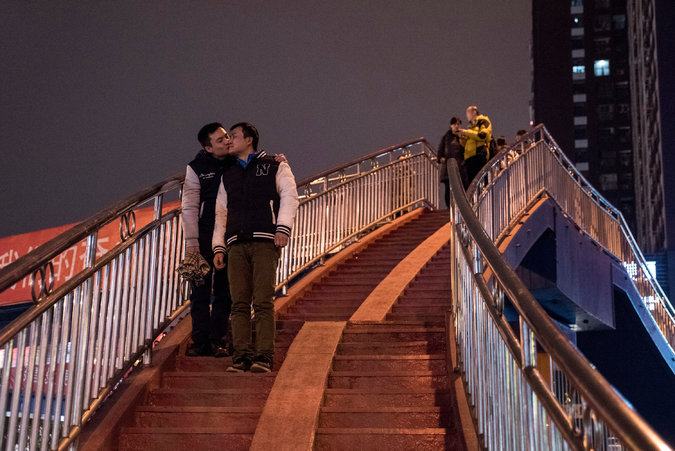 On January 5, the Furong district court in Changsha, Hunan accepted Sun Wenlin’s case against the municipal civil affairs bureau for denying him the right to marry his same-sex partner. This lawsuit will become the first marriage equality case to be heard by a Chinese court, and some in the legal and LGBT communities welcomed the visibility of the pending trial as a victory. At The New York Times, Edward Wong and Vanessa Piao report on the difficulty Sun faced finding legal representation and getting the case accepted:

Getting the lawsuit accepted by the Changsha Furong District People’s Court was not easy. The couple found a lawyer who agreed to take the case but then dropped it after his firm objected. That lawyer recommended Shi Fulong, whom the couple hired and who filed the case in the court on Dec. 16.

A court employee refused to accept the paperwork at first, but Mr. Shi pointed to new regulations passed in May that made it tougher for courts to reject cases without giving a strong reason.

[…] The first hearing was scheduled for Thursday, but the couple’s lawyer heard Tuesday that it had been postponed indefinitely because a lawyer representing the civil affairs bureau was busy, Mr. Sun said.

He added that the judge had called him the same day and said, “The hearing will be the day after tomorrow — are you O.K. with private information becoming public?” Mr. Sun said he was fine with that, and the judge then called Mr. Hu to ask the same thing.

The district court and the local police unit could not be reached for comment on Wednesday.

Mr. Sun said the case had cost them about $1,200 so far, nearly three times what each of them earns in a month. But he said they were determined to see it through to the end. [Source]

At her China Law and Policy blog, Elizabeth M. Lynch provides further details about the new case filing regulations mentioned above, describes the bravery of lawyer Shi Fulong amid attacks by state media and in the context of Beijing’s ongoing crackdown on rights lawyers and legal advocacy, and explains why the case’s acceptance may not hint that China is ready to allow marriage equality:

[…S]tarting in May 2015, that calculus [that a controversial case making it past the Case Filing Division signaled a good sign for the plaintiff] may no longer apply. Likely sensing that denying access to the courts is not the best way to raise the people’s confidence in their court system, in early 2015, the Supreme People’s Court (“SPC”) made reform of the Case Filing Division a major focus of its agenda. On May 1, 2015, new regulations on case filing took effect.

Under the new regulations, the Case Filing Division no longer “reviews” any of the merits of the case. Rather it’s role is just to “register” the complaint after the Division ensures that the complaint is compliant with the technical aspects of the law. Decisions whether to register the complaint are encouraged to be made “on the spot” (SPC Case Filing Regs, Art. 2 & 8). […]

It’s under these new regulations that China’s first gay marriage case was accepted by the Furong district court in the city of Changsha in central China. […]

[…] Since Sun’s case was accepted, the Chinese state-run media has openly – and often positively – covered this milestone. Not the usual M.O. for a politically-charged case against a government agency. But does this mean that China is ready to permit gay marriage?

Highly unlikely. For the Chinese state-run press, the positive focus has been the success of the new case filing system; that even a case that seeks to permit gay marriage is now accepted by the courts. And for sure, that is something that should be celebrated.

But more recently, in questioning the ethics of attorney Shi Fulong in taking the case, the Chinese press has signaled that the case will not be won. […] [Source]