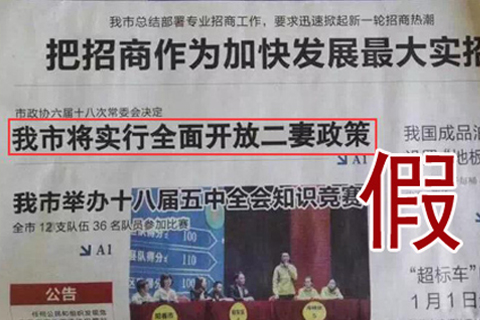 Caixin’s Wang Heyan reports public complaints about the detention of a Guangdong man over a faked “Two Wife Policy” headline. When the joke started circulating online, the Yangjiang Daily newspaper reported him to the police.

The Communist Party-run paper cited police as saying that an office worker admitted he made a copy of the front of the newspaper’s January 14 edition and replaced an article about the agenda for an annual session of the city’s government political advisory body with one about a purported plan by city officials to introduce a two-wife policy.

The man sent the fake front page to friends on the popular instant messaging service WeChat, and it began to spread to other social media platforms.

[…] Zhang Qingsong, a lawyer at Beijing Shangquan Law Firm, said police should not have acted unless they had proof the fake news led to widespread confusion and serious disruption of society.

“Anyone with a sense of humor would not take it seriously as it was obviously a prank,” he said. [Source]

Other rumor-related detentions include those of a man warning of zombies in Guangzhou last year, and a Shandong farmer who claimed to have killed an alien in 2013. The government’s long-running war on rumors serves purposes other than staving off outbreaks of panic, protest, and polygamy: in the words of censorship researcher Jason Q. Ng, it is “a strategic attempt to reclaim the commanding heights of mass communication by denigrating unofficial news and commentary outlets.” On the other hand, as he wrote in a 2015 study on WeChat censorship, “online rumors can be viewed as a kind of social protest by citizens skeptical of official news and the censorship of more independent sources of media.” An appendix to the paper provides details of censored rumors on topics ranging from elite politics, foreign policy, and Kim Jong-un to cancer, reincarnation, and economic threats to humans from artificial intelligence and advanced robots.