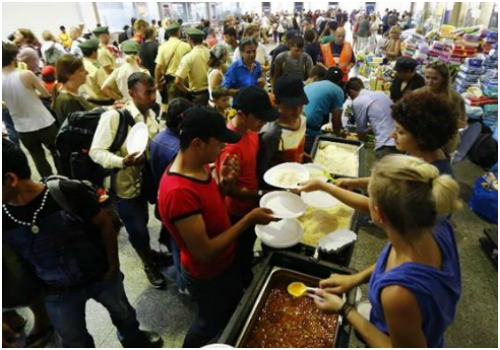 This week, Amnesty International released its first Refugees Welcome Index, based on a global survey of more than 27,000 people across 27 countries. China’s public was ranked the world’s friendliest towards refugees: 94% (third only to Spain and Germany) said they would “personally accept people fleeing war or persecution” into their country, far above the global average of 80%. As many as 46%, by far the largest proportion in any country, said they would welcome refugees into their own homes, compared with a global average of 10%. 86%, also the highest proportion anywhere, said that China’s government should do more to help refugees.

The results appear to contrast sharply with Beijing’s policy toward the Syrian refugee crisis: the country has offered humanitarian assistance and support in increasing Middle Eastern countries’ capacity to take in refugees, but as of last August hosted only 35 Syrian refugees and asylum seekers itself, according to the United Nations. Meanwhile, officials have attacked the West both for destabilizing Syria and for failings in welcoming those displaced, arguing that refugees are not China’s responsibility. The apparent gulf between public opinion and policy is far from unique to China, Amnesty stated:

“These figures speak for themselves. People are ready to make refugees welcome, but governments’ inhumane responses to the refugee crisis are badly out of touch with the views of their own citizens,” said Amnesty International Secretary General Salil Shetty.

[…] “We did not expect to see such strong levels of solidarity with refugees, but the results reflect the inspiring human compassion people feel to those fleeing war. They want to do what they can to help, not turn their backs. Politicians need to show the same spirit,” said Salil Shetty.

“People seem to be more committed to principles set down in international law than many of their governments, who are increasingly tearing up or ignoring commitments that have stood for 65 years.” [Source]

Many on Chinese social media were skeptical of their compatriots’ supposed warmth towards refugees, however, with some suggesting a misunderstanding or contrasting the findings with attitudes towards domestic migrants. That 70% of Chinese respondents supported the right to take refuge from war or persecution in other countries—a substantial figure, but incongruously low compared with the others—suggests that the situation in China may indeed be more complicated. At Quartz, Gwynn Guilford and Hanna Kozlowska examined the wording of the survey’s Chinese-language version, which did not consistently specify the inclusion of international refugees:

[… T]he word that GlobeScan, the consultancy who conducted the research, used to in its phone-administered survey, 难民 (nanmin), literally means “person displaced by calamity”—without regard to nationality. So it can mean a person fleeing, say, Syria. Or, just as easily, the word might refer to someone driven out of their home within China (what humanitarians call “internally displaced people,” or IDPs). For this reason, Chinese-language media often make the distinction between “international refugees” and “domestic refugees.” And thanks to both its size and the tragic frequency of natural disasters, China just happens to have a lot of those latter.

So this could mean that some of those 46% of respondents willing to let a refugee shack up with them didn’t mean international refugees—instead, they meant other calamity-struck Chinese people. If the latter, that still very impressive generosity toward their displaced countrymen would seem to square with the unprecedented groundswell of altruism after the deadly 2008 Wenchuan earthquake, when volunteers from around China poured into the area to help any way they could, and adoption inquiries for children orphaned by the earthquake soared. [Source]

At What’s On Weibo, Diandian Guo and Manya Koetse point out further disagreement online as well as conflicting findings from an online survey by the state-owned Global Times. The newspaper’s introduction to the poll referred to Amnesty’s report but pointedly declined to name the organization. More than 90% of respondents expressed unwillingness to accommodate “nanmin” (of unspecified origin) in their own homes, and nearly 80% to welcome them into their neighborhoods or cities. Guo and Koetse continued:

Many Weibo commenters point out that unwillingness to accept refugees is related to China’s demographic and economic situation. One netizen comments that China already has many domestic refugees, as many Chinese struggle to make a living in their own native places: “How can a country be welcoming to others when it already has difficulty to take care of its own citizens?”, and: “Leave us alone, we’re refugees ourselves.”

[…] There is also anger in the comments of Weibo users, as many of them doubt the motives of Amnesty International and claim that the survey was purposely presented this way to make China look bad for not taking in more refugees. They plead that instead of going to China, America should take in more refugees: “Let them go there [America]!”

[…] In the current refugee crisis, it is Europe that is mostly facing pressure on its asylum system – not China. Both the results of the Amnesty International and Global Times survey, representative or not, are therefore only speculative on how public attitudes would be if incoming refugees would become a real issue for the PRC. Hosting refugees is currently not a prominent issue on China’s current state agenda. [Source]