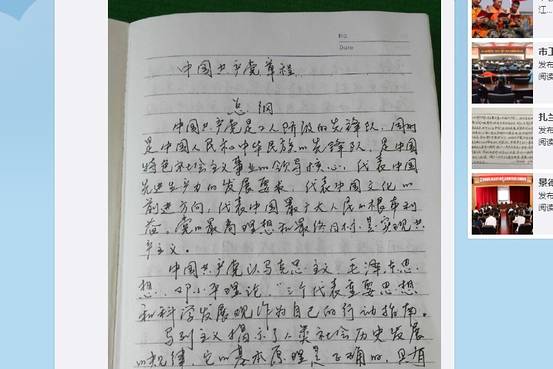 The Chinese Communist Party launched a campaign in March for its members to hand copy the party constitution as part of a broader drive to boost party loyalty and enthusiasm. The 100-day campaign caught media attention after two government employees in Jiangxi were photographed copying the constitution on their wedding night. At The Wall Street Journal, Josh Chin reports that the People’s Liberation Army Daily has published a commentary calling on Party members to undertake the task with greater sincerity:

In a commentary published this week, the official newspaper of the Chinese military, the People’s Liberation Army Daily, complained that many party members were merely going through the motions of writing out the thousands of characters.

“If in copying, people only move their pens and not their hearts, if they only brandish their handwriting in their friend circles without seeing the real document, getting in touch with its ideas and soul, it gives this well-intentioned activity a different flavor,” the commentary said.

Steps needed to be taken, it continued, to prevent the copying of the constitution from being reduced to an “exquisite formalism.” [Source]

Observers warn that the campaign, which mimics political drives undertaken during the Cultural Revolution, will not only fail to achieve its objective in the current information age but also become the object of ridicule. South China Morning Post’s Nectar Gan reports:

Chen Daoyin, an associate professor at the Shanghai University of Political Science and Law, said the campaign, with its ­ceremonial emphasis, bore a ­resemblance to the movement to study quotations from Mao ­Zedong during the ­Cultural Revolution.

“This reflects a societal turn to the left since Xi rose to power,” Chen said. “But society is progressing, and the new generation, under an age of rapid development of the media and information, is no longer the same. These campaigns nowadays often end up as a target for sarcasm by society, as the propaganda apparatus is always falling behind social ­development.”

[…] “The only thing it can generate is either sarcasm or ridicule. In an information society it is impossible to control people’s minds with absolute authority,” Zhang said. “This is a very stupid approach … and may very well end up as a joke.” [Source]

Elsewhere, Kevin Schoenmakers at Sixth Tone reports that a group of people in work uniform were seen copying out the party constitution in front a court in Jiangxi as part of a protest against the court’s decision to auction off a company’s land.

The organizer of the protest, Min Saifeng, is the general manager and major shareholder of Jiangxi Ganpo Real Estate Co. Ltd. In a written statement Min sent to Sixth Tone on Monday, she claims that Guo Bing, vice president of the Jiangxi High Court, had “illegally auctioned” the company’s land after a “phony lawsuit.”

Min called Guo’s actions out of line with the party constitution and said he should study it more closely.

In the Tuesday news report, local authorities told reporters that not only was the court’s conduct lawful, but that Jiangxi Ganpo had repeatedly interfered with the court’s duties in regard to the sale. The article said that local police found Min had hired the protestors from the local labor market, and that Min and another person had now been sentenced to 10 days’ detention for disturbing the order of public institutions. [Source]