Ren Zhiqiang Returns to the Spotlight 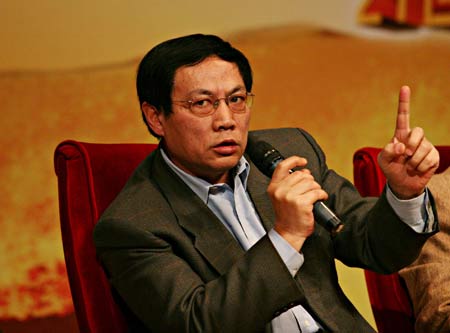 After Xi Jinping emphasized that state media should “serve the Party” early this year, Party member, retired real-estate tycoon, and outspoken social media user Ren Zhiqiang—aka “Ren the Cannon”—dissented: “When does the people’s government turn into the Party’s government?” he asked on Weibo. “[Are the media] funded by Party membership dues? Don’t waste taxpayers’ money on things that do not provide them with services.” After the characteristically candid social media outburst—far from his first— Ren found himself exiled from Chinese social media, his Party membership on probation for a year, and his name attacked by the state-funded media that he critiqued. After months out of the spotlight, Ren last weekend reemerged with his opinions—this time considerably less contentious and more in-line with Party goals—at a forum on environmentally friendly enterprises. The South China Morning Post’s Choi Chi-yuk reports:

“In a bid to force those polluting enterprises, we say no to them in the production course, which means we would no longer purchase your products,” Ren was quoted as saying.

[…] “Products supplied should meet the green standard in the first place. Secondly, the production process of the products should be ecologically friendly.”

[…] As the son of a former vice-minister of commerce, Ren was regarded as a “princeling”. He also reportedly had close relations with Wang Qishan, the chief of the party’s corruption watchdog. They knew each others when they were teenagers.

Ren was accused of serious violations of party discipline and was reprimanded by the party committee of Dongcheng District in Beijing in early May. [Source]

The Hong Kong Free Press notes that Ren turned down a question about his retired social media accounts at the forum, and also notes an earlier online interview with Ren:

Asked by an AFP reporter if he could discuss his microblog’s closure, he replied gruffly: “I can’t.”

The Cyberspace Administration of China ordered the closure of Ren’s blog after he questioned Xi’s policy of tighter party control over state media.

[…] Ren last week gave his first online interview since the microblog’s closure, in which he called on the government to deepen market reforms and obliquely referred to his own punishment.

“There are some activities the upper ranks won’t let me take part in,” he said. “But when I take part in philanthropic activities, they will allow it.” [Source]