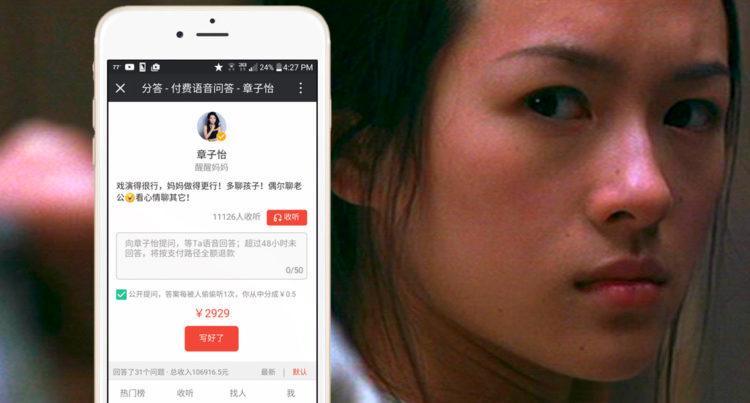 Q&A app and online forum Fenda, a service that gives experts a cash incentive for answering questions from their fellow users, launched this year, and quickly became a popular spot for netizens to question top celebrities on their personal lives. Since early this month, the forum has been offline, and nearly all content in the app has disappeared. At Tech In Asia, C. Custer reports on the sudden halting of the popular service, the company’s claim that it has ceased for an upgrade, and suspicions that the true reason for its lapse is tied to an ongoing central government crackdown on undesirable online information:

Understandably, people have begun to question the “upgrade” explanation. And it does defy belief: why would an app that launched just a couple of months ago need to upgrade its tech already? And why would that upgrade take weeks? Zaihang is by all accounts a competently-run and well-backed startup; Wang Sicong himself is one of the company’s investors. It seems unlikely that they would have built the platform on unscalable technology or made any other error so significant that a massive, weeks-long overhaul would be necessary so soon after the initial product launch.

Nobody knows what’s really going on, and Zaihang/Fenda founder Ji Shisan isn’t talking. But the most popular theory is that the app has been forced to remove all of its content, at least temporarily, because it’s under investigation by some government regulatory arm.

It certainly is possible that Fenda could have run afoul of regulators. Any platform that allows user-generated content runs that risk, and Fenda got its viral boost early on in part thanks to celebrities like Wang Sicong answering user questions like “What’s your favorite sex position?” And while mildly scandalous questions like that probably wouldn’t have gotten Fenda into trouble, it’s entirely possible that other users (both askers and answerers) may have taken things a bit further, possibly running afoul of China’s rather vague ban on “vulgar” content.

It’s also possible that users have been broaching other taboo subjects, like sensitive political topics, on the platform. [Source]

State-run tabloid Global Times has also reported on the shut down of Fenda. Their report, like Tech In Asia’s, notes silence from the company’s founder, before explaining why user-generated content services like Fenda provide a unique challenge to Chinese censors:

Apart from Fenda, new online services such as live streaming platforms have provided new space for illegal content, and the unpredictability of content generated on those platforms also makes Internet censorship difficult.

A total of 12 live streaming platforms, including Douyu TV, 6.cn and Panda TV, received warnings in April for violating regulations banning content that features pornography, violence and other kinds of illegal behavior.

[…] Unlike the previous kinds of information – which mostly consisted of words and pictures posted and written in a more structured way – information generated by users in an instant manner is unpredictable, which makes supervision difficult, Wang Sixin, deputy director of the School of Politics and Law at Communication University of China, told the Global Times via phone on Wednesday.

He explained that though current technology can identify key information in voice messages and pictures, it’s almost impossible to fully supervise all the platforms and their content. […] [Source]

The Global Times’ report also notes other government directives to increase the traceability of user-generated new media content, such as the requirement of real-name registration (which the government has for years been saying will soon be compulsory), and the implementation of a “social credit system” in certain cities that penalizes companies and users for their conduct.