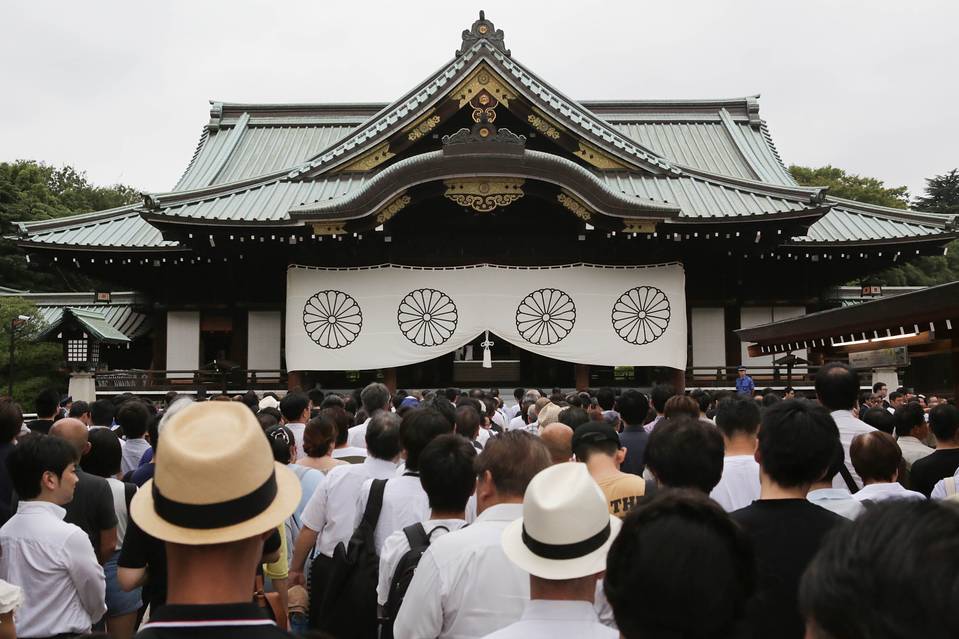 Mr. Abe sent an aide to the shrine with an offering of an envelope containing money, while Defense Minister Tomomi Inada, who took office this month and is known for her nationalist views, was in the East African nation of Djibouti, where Japan’s Self-Defense Forces have antipiracy operations.

Internal Affairs and Communications Minister Sanae Takaichi and Tamayo Marukawa, state minister in charge of the 2020 Tokyo Olympic and Paralympic Games, visited the shrine, which honors 14 Class-A war criminals and 2.5 million war dead. Deputy Chief Cabinet Secretary Koichi Hagiuda visited the shrine earlier in the morning, while Masahiro Imamura, the reconstruction minister for disaster-hit regions, had already visited the shrine on Thursday ahead of the Aug. 15 anniversary.

Note that the term “Class-A war criminals” is potentially misleading.

Despite Abe’s absence, the visits once again drew sharp rebukes from Japan’s neighbouring countries. According to Reuters, the South Korean government expressed “deep concern and regret that responsible political leaders…are again paying tribute to the Yasukuni Shrine that glorifies the history of the war of aggression.” At the same time, China’s Foreign Ministry Spokesman urged Japan to repent for its wartime atrocities. From Xinhua News:

“That some Japanese cabinet members paid tribute to the Yasukuni Shrine, which honors Class-A convicted war criminals and aims to beautify aggression wars, once again proved the Japanese government’s wrong attitude to the history-related issue,” Foreign Ministry Spokesman Lu Kang said in response to a question from the press.

The Yasukuni Shrine, which honors 14 Class-A convicted war criminals among 2.5 million Japanese war dead from the WWII, is regarded as a symbol of the past Japanese militarism.

Lu urged the Japanese side “to squarely face and deeply reflect upon the history of aggression, deal with relative issues in a responsible and appropriate way, and work to win trust from its Asian neighbors and the international community with concrete moves.” [Source]

A Xinhua op-ed further criticized Japan’s reluctance to offer a formal apology for past war crimes. Meanwhile, at a memorial ceremony later Monday, Japanese Emperor Akihito reiterated his feelings of “deep remorse” over the war while Abe pledged to “contribute to world peace and prosperity.”

At Asahi Shimbun last week, Nanae Kurashige reported that Beijing had specifically and unusually asked Shinzo Abe’s Cabinet officials not to visit the Tokyo shrine ahead of this week’s anniversary, citing particular concern with a potential visit by Japanese defence chief Inada:

Several sources knowledgeable about Japan-China relations said the Chinese government made the request on or prior to Aug. 11.

[…] China had already been concerned with Inada’s appointment as defense minister. The state-run Xinhua News Agency ran a report immediately after Inada was named defense minister calling her “a rightist with militaristic tendencies.”

[…] Beijing does not want to unnecessarily roil domestic public opinion with a Group of 20 summit meeting scheduled for early September in Hangzhou.

Having domestic opinion spin out of control is the last thing China wants. That apparently led to the low-key efforts to prevent Cabinet ministers from visiting Yasukuni. [Source]

In an interview with Nikkei, Inada evaded questions about Japan’s wartime actions and expressed willingness to improve ties with China and South Korea.

Q: Chinese and South Korean media have called you a right-wing politician.

A: I think they probably picked up on things like trials I was involved with when I was an attorney [related to the Nanjing Massacre in 1937]. Building cooperative relationships with China and South Korea is crucial for the peace and stability of East Asia and the Pacific region. I want to work to create opportunities for dialogue. I think discussion will clear up any misconceptions about me. I’d like to visit China when the opportunity arises.

Q: Was the war that lasted from the Second Sino-Japanese War to World War II a war of aggression, or was it fought to defend the country or to liberate Asia?

A: If you want the government’s opinion, you should ask the prime minister and the chief cabinet secretary. I believe that Prime Minister Abe’s statement last year [to mark the 70th anniversary of the end of World War II] is the view of the government.

Whether it was aggression or not is a matter of opinion. You can’t make sweeping generalizations. Objective reality is the most important thing to consider in one’s understanding of history. I shouldn’t express my personal opinion. I agree with the 70th anniversary statement. [Source]

China’s Defense Ministry has issued a statement denouncing Inada’s remarks, which are seen as an attempt to downplay Japan’s role in the Nanjing Massacre.

Elsewhere, AFP reports that Japan is set to upgrade its missiles in a bid to strengthen its defense capabilities in light of Chinese incursions into disputed waters around the Diaoyu/Senkaku Islands.

Tokyo plans to deploy the weapon, which reportedly will have a range of 300km (190 miles) on islands such as Miyako in Okinawa prefecture, the top-selling Yomiuri Shimbun newspaper said, without citing sources.

The range will cover the disputed island chain, the Yomiuri said, adding that the deployment is expected by 2023.

[…] “In light of China’s repeated acts of provocation around the Senkaku islands, Japan aims to increase deterrence with improved long-range strike capability,” the newspaper stated.

The missile will be developed by Japan and will use solid fuel, the Yomiuri said, referring to the technology that allows for weapon’s long-term storage and capacity to be launched at short notice. [Source]

Tune in to CSIS’s ChinaPower podcast for a discussion of Sino-Japanese relations with Bonnie Glaser and Sheila Smith.