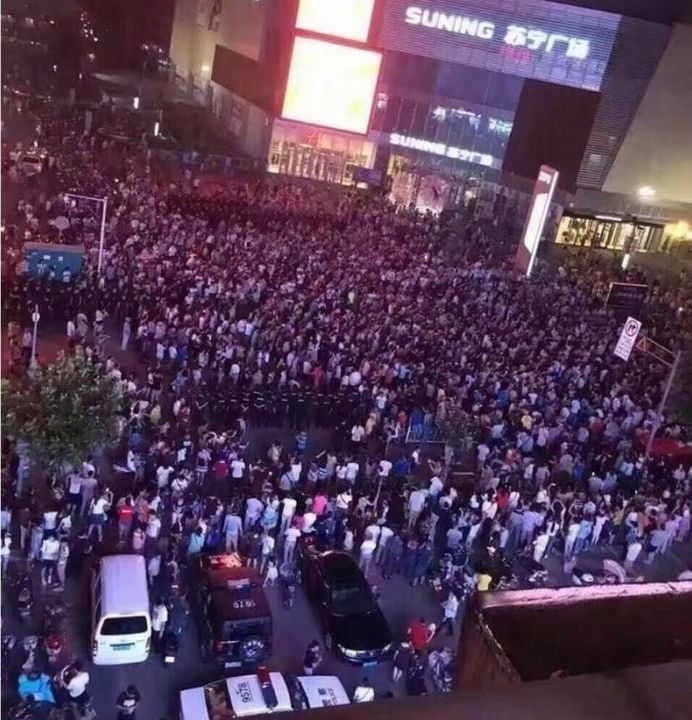 Thousands of residents in Lianyungang, Jiangsu staged a demonstration over the weekend to protest against a proposed nuclear waste reprocessing facility to be built in the city by the China National Nuclear Corporation, in collaboration with French nuclear reactor maker Areva. The episode is the latest in a series of protests in recent years that have complicated government plans for expanding nuclear power. The New York Times’ Chris Buckley reports:

The government of Lianyungang, a city in Jiangsu Province, tried to calm residents on Sunday, a day after thousands of people defied police warnings and gathered near the city center, chanting slogans, according to Chinese news reports and photographs of the protests shared online.

They chanted “no nuclear fuel recycling project,” the state-run Global Times reported, citing footage from the scene. “It is unsafe to see another nuclear project coming and besieging us,” one resident told the paper.

Residents used WeChat, a popular Chinese messaging service, to share video footage showing downtown Lianyungang at night crowded with hundreds of people, many of them middle-aged, walking down a broad street in waves and chanting loudly, “Oppose nuclear waste, defend our home.”

The city government responded with the mix of reassurances and warnings that Chinese officials often use in the face of protests over pollution and environmental concerns. “Currently, the project is still at the stage of preliminary assessment and comparing potential sites, and nothing has been finally decided,” the city government said in a statement issued on Sunday. [Source]

Hong Kong Free Press’s report includes images of the protest. Lucy Hornby and Luna Lin at FT report that lack of government transparency and safety risks are among the biggest concerns for the protesters in Lianyungang:

“The government kept the project a secret. People only found out about it recently. That’s why most people are worried,” said Mr Sheng, a local resident who declined to give his full name. “Some speculate that the nuclear waste is from other countries and do not understand why the project should be built here instead of over there if it’s as safe and beneficial as they say.”

[…] “We already have a chemical industrial park in Lianyungang and the pollution problem is quite worrying. Nuclear waste is far worse than normal chemical pollution,” said Mr He, a local shop owner.[Source]

Public opposition to nuclear projects such as the one proposed for Lianyungang could derail China’s ambitious plans to expand its nuclear power and reduce the country’s consumption of fossil fuels. From Laura Zhou at South China Morning Post:

The rally over a used-nuclear-fuel processing and recycling plant underscored the tension ­between public concern over ­nuclear safety and the growing pressure on China to reduce its reliance on fossil fuels.

[…] China’s ambition to develop nuclear power was briefly hampered in 2011, after Beijing suspended approval for new nuclear power stations and started to conduct nationwide safety checks of all projects in the wake of the ­disaster in Fukushima, Japan.

The moratorium was lifted last year when at least two nuclear power plants, including one in ­Lianyungang, were given the green light for construction.

The nation’s five-year plan covering 2016 to 2020 calls for a dramatic increase in non-fossil-fuel energy sources, with six to eight new nuclear plants to be built each year.

China has 35 nuclear reactors in operation and 20 under construction, according to the International Atomic Energy Agency.

Six provinces – including Guangdong, Shandong , ­Fujian, Zhejiang and Gansu – the only inland province – are listed as candidates for the Sino-French project, according to China Business News. [Source]

Elsewhere, South China Post’s Stephen Chen writes that China is facing a serious shortage of nuclear technicians that threatens nuclear plant safety, as illustrated by a 2015 cover-up of a mishap at a nuclear power plant in Guangdong. Four staff members at the plant have been punished in connection to that case.

There was a pressing need in China to train more nuclear engineers and other technicians as the nation spearheads efforts to build more reactors to meet its energy needs and greenhouse gas emission reduction targets.

The cover-up of a pump failure in March 2015 at the Yang­jiang nuclear power station in Guangdong province was only made public in May this year when the environment ministry announced that was holding four operators responsible. The team leader lost his senior operator’s licence and was moved to a less sensitive post, while the remaining three received warnings.

[…] Experts and industry insiders said a cover-up or a delay in reporting an incident should technically not happen because of strict safeguards and the fact that a pump failure could potentially lead to a shutdown of the power plant – making it more difficult to keep it at the dark.

But the shortage of nuclear professionals may push plant operators to cover up incidents because imposing disciplinary action on professionals would mean means there would be fewer workers to maintain operations.

“There is a shortage of skilled hands,” said a nuclear engineer with the China National Nuclear Corporation, a competitor of China General Nuclear in the domestic market. [Source]