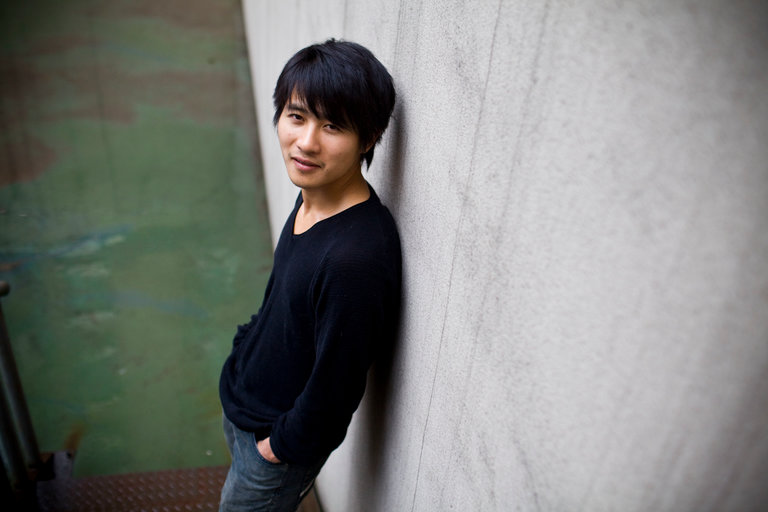 Shanghai-born blogger, author, director, singer, restaurateur, and race car driver Han Han published his first essay while still in junior high school in 2000. After dropping out of high school, he published his first book (a satire on education in the PRC called “Triple Door”), continued writing essays on current events and culture, and became China’s most popular blogger, solidifying his reputation as a rebellious youth icon. (His blog also regularly irked many Chinese conservatives and neo-Maoists.) By 2010, his reputation had extended beyond China, winning the number two slot in TIME Magazine’s 100 poll, and featuring in mainstream English-language media profiles. Now 34 years old, Han Han has published a collection of his essays translated into English by Alice Xin Liu and Joel Martinsen. At Post Magazine, David Wilson reviews the book and further profiles the young superstar and renaissance man:

Han is also famed as a rally car driver, and the writer with a gift for dodging both death and censors does himself down throughout much of the new book. Still, he has succeeded in both careers, thanks to a willingness to keep testing his mettle, irrespective of the risk. The Problem with Me is partly dedicated to every car he has ever struck.

[…] Born in 1982 to middle-class parents, Han describes him­self as a “rural loser” who started with nothing: no power or influence. His first essay, titled Unhappy Days, was publish­ed when he was attending junior middle school. He later won entry to Shanghai’s Songjiang No 2 High School, because of his sporting prowess and an urge to impress his girlfriend.

[…] In 1999, during his first year at high school, he won top prize in a writing contest, with an essay on the national character titled Seeing Ourselves in a Cup. Yet, when examinations rolled up, he failed seven subjects and was kept in school for another year. His predicament made him think about China’s education system, which he criticises in another essay, titled The Problem With Teachers.

“The Chinese education system is terrible because the teachers are terrible,” he writes. If they were attractive or had good grades themselves, they would shun the profession, Han adds. He’s probably exaggerating but it’s often hard to tell. […] [Source]

Bard College professor Ian Buruma earlier reviewed the new English-language anthology at The New York Times, where he referred to the young writer and racer as the “Pied Piper of the post-Tiananmen generation”:

Han Han is the Pied Piper of the post-Tiananmen generation. With the shaggy-haired looks of a teenybopper star and the cool sassiness of an intellectual punk rocker, he is an idol and a social media guru who has been compared with Lu Xun, the most famous Chinese satirical writer and essayist of the 20th century.

The success is indisputable. But judged by the essays published in this collection, the comparison with Lu Xun, perhaps the greatest stylist in modern Chinese, is silly. Han Han is not a great writer, nor a profound thinker. His philosophy, if that is what it is, can be summed up in one sentence, written in a blog in 2012: “Life as I know it means doing things you like and taking care of yourself and your family.”

No Jean-Paul Sartre, then. But this may not be an entirely bad thing. For what Han Han offers is not original thought, or indeed great prose, but attitude, perfectly attuned to blogs and tweets and other forms of social messaging. And his attitude is often attractive, even refreshing, in a blogosphere that is so full of cant and vitriol. […] [Source]

In a more recent interview with Han Han, The New York Times’ Karoline Kan talks to Han Han about being labeled “rebellious,” his thoughts on his early fame, and censorship and nationalism in China:

The theme of your book seems to be you making trouble. You’re still being called a rebellious troublemaker. How do you feel about that?

I don’t think I am or was rebellious. I don’t disagree for the sake of disagreeing, as the word “rebellious” suggests. I do whatever I think is right, whatever I like and want to do. If others see me differently from the way I see myself, there’s nothing I can do about it. Media always wants to stick a label on people to make it easier for readers to remember.

Do you think Chinese millennials don’t care enough about history and politics?

In the West, a lot of people have the wrong idea that, because of the “Great Firewall,” Chinese don’t know what’s going on in the world. The West imagines that young Chinese are much less informed than they actually are. In China, especially in mid-sized and large cities, people know much more about politics, history, the news than many Westerners realize.

Of course, Chinese people’s views on many issues are very different from those in the West, but that’s not the result of a lack of information. Even if every American website could be accessed here in China, Chinese would be just as nationalistic, or even more so. […] [Source]

Han Han’s “The Problem With Me, and Other Essays About Making Trouble in China” is now available for purchase. For more coverage of Han Han throughout the years—including several original translations—see prior coverage via CDT.