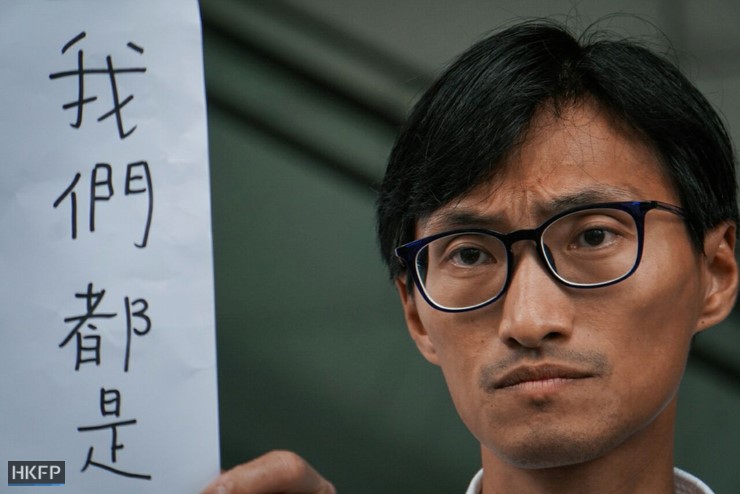 On September 4th, Hong Kong elected a new generation of pro-democratic lawmakers to the territory’s Legislative Council. Of those who won seats, at least six supported platforms that called for greater independence and self-determination for Hong Kong, marking the first time that the issue of independence has gained a foothold in the city’s mainstream politics. The legislative election has sent a strong signal to Beijing that many in Hong Kong will continue to fight for its democratic institutions and liberties.

However, the election was marked by official obstacles and alleged intimidation. Ken Chow, a candidate who ran in the Legislative Council election before dropping out of the race in August, has claimed that he was forced to pull out of the city election after receiving threats from Beijing. Venus Wu at Reuters reports:

Ken Chow of the pro-business Liberal Party told Reuters on Wednesday he withdrew from the election after three men he believed were sent by the Chinese government threatened him while he was visiting the city of Shenzhen in August.

“They said I must stop campaigning. They also said I must leave Hong Kong as soon as possible … and I was only permitted to come back after the results,” Chow said.

“They said, ‘If you keep being stubborn, we will take action, and your supporters will pay a heavy price.'”

[…] Chow, who campaigned as a pro-establishment candidate, said other people, whom he declined to identify, had offered him money to withdraw from the election, in order to leave the field open for a pro-Beijing candidate.

“They said ‘you don’t have a chance to win. If you really participate in the election, you’ll only ruin the grand plan’,” Chow said. [Source]

Chow made explosive claims on Wednesday that he was invited to a hotel restaurant in Shenzhen to meet with a friend on August 24, the day before he suspended his campaign, but was instead introduced to the three, who he said had just flown in from Beijing.

“They were from a secret department that they could not disclose,” he said on a RTHK programme on Thursday. “They flew in especially to handle the matter of my election campaign. They asked me to suspend my campaign.”

[…] “They spoke Cantonese, not with [a Hong Kong accent], it sounded like the Guangzhou accent,” he said, adding that they “looked like mainland officials” based on how they spoke, acted, and the cigarettes they smoked.

[…] He was asked to stop going to election debates, suspend his campaign and leave Hong Kong. According to Chow, they held important information about people close to him and threatened to take action if he did not drop out. “The information could only have been collected by government agencies,” he said.“I had no choice – they needed me to make a decision that night,” he said. [Source]

Chow is not the only one to have suffered alleged intimidation. Eddie Chu, one of the new anti-establishment lawmakers who received the highest number of votes on Sunday, revealed this week that violent threats made against him before and during the legislative election have intensified since the polls closed, escalating to “credible death threats” against him and his family. Chu has reportedly been targeted because his campaign promised to expose alleged collusion between rural leaders and government officials in a land development case. Oiwan Lam at Global Voices reports:

As an activist and investigative journalist, Chu has worked in recent years to expose collusion between the Hong Kong government, developers, rural indigenous leaders and triads (Chinese organized crime groups) regarding land development in the New Territories, a region of Hong Kong. In May this year, a village chief in Yuen Long warned Chu that if he continued to advocate for the construction of 17,000 public housing units in Wang Chau district, he would be attacked after election day on September 4.

[…] On September 4, Chu was followed by two vehicles and saw a man taking photos of him and his election team members. Local media later exposed that one of the vehicles belongs to a man with a long criminal record.

[…] Democratic Party spokespeople say they believe Chu was targeted because he interfered with the illegal transfer of indigenous inhabitants’ rights in the development of small house units.

According to local “small house policy”, indigenous villagers in the New Territories have the right to build a house of their own. This right is non-transferable. However, secret deals are often made between rural elites and developers, and triad leaders also have stepped in to force indigenous villagers to transfer their land rights. [Source]

“The violent threats have intensified over the past few days, endangering my life and the lives of my family,” Chu said. “This is now a very serious matter… we hope the police investigate this with seriousness, and take measures to protect my family.”

[…] Chu appeared at the police headquarters on Thursday to seek advice. He said he has also been seeking advice from a professional security company in order to protect himself and his family.

“Our rule of law can be said to be non-existent if a newly elected lawmaker with more than 84,000 votes… cannot even go home, and received death threats due to my political views,” he said. “Our Hong Kong citizens will feel the danger, and those who voted for me will be very angry.”

“Politically motivated threats of violence against elected representatives of the people are a direct attack on rule of law and democracy,” a statement from Chu said. “The Hong Kong police is duty bound to uphold the rule of law and our constitutional rights.” [Source]

Rural leader Tsang Shu-wo and pro-Beijing lawmaker Leung Che-cheung have both denied involvement in the death threats against Eddie Chu.

Besides Chow, a number of candidates were also barred from running in the legislative election after Hong Kong’s election commission introduced a new requirement in July compelling candidates to sign a pledge acknowledging Hong Kong is part of China. One of the disqualified candidates, Andy Chan Ho-tin, has filed a court challenge against his candidacy ban. HKFP’s Kris Cheng reports in a separate article:

Appearing at the High Court on Friday morning, Chan officially filed an election petition in an attempt to overrule the election. He was barred from running because the returning officer deemed his support of Hong Kong independence to have violated the Basic Law, the mini-constitution of Hong Kong. Chan was one of five candidates disqualified because of their political views.

“I strongly condemn the Hong Kong communist government, which tore apart the false appearance of rule of law in order to ban pro-independence candidates from running, so that no one can advocate Hong Kong independence in the election and enter the Legislative Council,” he said.

[…] He said the application argued that returning officers were breaking the law if they banned a candidate on the basis of statements he made on social media, or in his election platform. The law did not authorize them to examine these statements, Chan said.

He also challenged the newly-added confirmation form in the nomination process – which requires candidates to declare that they uphold Basic Law articles on China’s sovereignty over Hong Kong – as not having any any legal basis. [Source]

Edward Leung, another candidate barred from running due to his pro-Hong Kong independence stance, will also appeal his election ban. Suzanne Sataline at Foreign Policy reports:

Edward Lueng told interviewers that he signed the loyalty oath with reluctance. The public knew where he stood: He had campaigned on independence for months as the spokesman for Hong Kong Indigenous, apost-protest movement that morphed into a political party. But he reasoned he’d accomplish more inside the chamber than out. The elections official who rejected Edward Leung’s nomination indicated she had perused media reports and Facebook posts and decided the young man wasn’t trustworthy. The young man countered that assessment. “I wholeheartedly uphold the Basic Law,” he told one interviewer. “If not, I wouldn’t run for election.”

[…] Lawyers and activists condemned the commission’s decision to blacklist Leung and others, accusing the government of censorship and violating the city constitution. There are two ways the controversy might play out. If city officials want to avoid a court’s involvement, they could seek guidance from the standing committee to the National People’s Congress, China’s rubber-stamp legislature. […]

[…] It’s more likely that a court will address the ill-conceived candidate ban. Lawyers say they expect a judge will fault the city for disqualifying candidates on the theory that they might violate the Basic Law. A remedy won’t be easy, says Wilson Leung, convener of the Progressive LawyersGroup, a league of 90 pro-democracy lawyers. If all the rejected hopefuls win their appeals, a court could order new elections in every one of the affected districts, a task that would once again let voters choose from dozens of candidates. The issue might take two years to resolve, the lawyer Leung said. [Source]

At The Economist, an author writes that “it is China’s own miscalculations that have fuelled support for politicians known as ‘localists.’” Meanwhile, Hong Kong’s former Chief Executive Donald Tsang said that the issue of Hong Kong independence “will disappear on its own” if it is “superficial.”