Struggle Over HK’s Identity to Continue After Election 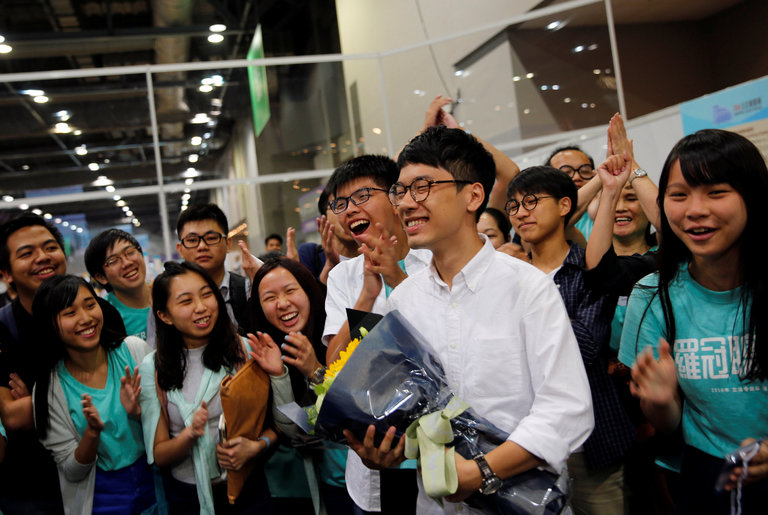 On Sunday, voters in Hong Kong turned out in record numbers to elect a new generation of young pro-democracy activists to the territory’s Legislative Council in the first major election since the 2014 Umbrella Movement, when hundreds of thousands took to the streets to protest Beijing’s interference in the city’s politics. Of the pro-democracy candidates elected over the weekend, a number of them are outspoken supporters of greater independence and self-determination for Hong Kong. Those who were less radical outperformed the more “militant” candidates, Joyce Ng, Kinling Lo, and Jeffie Lam at South China Morning Post report:

They may all be identified as localists advocating self-determination for Hong Kong, but those advocating peaceful means have performed better in the Legislative Council elections than those taking a “militant” approach.

Of the two dozen localist candidates, those who call for “democratic self-determination” have emerged as the big winners.

The trio shared a similar vision and would work together to push certain issues in Legco, Lau said. [Source]

The following are profiles of some of the youngest lawmakers to win seats in Sunday’s election. From BBC:

Nathan Law is the most high-profile of the pro-democracy names to win a seat – and will become the youngest lawmaker in Hong Kong.

The 23-year-old student activist and former Occupy protest leader is a co-founder of the Demosisto political party, which calls for HK’s right to self-determination.

[…] Sixtus “Baggio” Leung, 30, is a candidate for the new Youngspiration party and is known to have openly supported independence.

Youngspiration has a so-called “localist” platform; defiantly pro-Hong Kong and against immigrants and tourists from China.

[…] Yau Wai-ching is also with Youngspiration – the 25-year-old emerged as a shock winner, edging out a veteran pro-democracy lawmaker.

One of the more prominent members of Youngspiration, she ran in local district council elections last November, just one year after the umbrella movement in Hong Kong inspired her to enter politics and to campaign for Hong Kong’s independence. [Source]

At Al Jazeera, Priyanka Gupta spoke to Nathan Law about his campaign and his plans for the road ahead:

Al Jazeera: Tell us about your campaign and why you think you won?Law: I believe the people of Hong Kong were looking for a new voice in the electoral system who can uphold the different voices of the democratic movement. I think the elections reflect that.

[…] Al Jazeera: What does the road ahead for you and your party hold?

Law: We need time to digest and assess first and see how we can bring changes and push for the self-determination movement. How can we arouse public debate and discussion?

[…] Al Jazeera: Will you be pushing for change in the current electoral system, and how?

Law: Definitely, we want electoral change in our system. That is the basis of democracy. We want to change that and we should do it together. [Source]

Sunday’s legislative election result indicates an important shift in Hong Kong politics where the issue of independence has been brought from the periphery onto the mainstream political agenda for the first time. Emily Rauhala at The Washington Post reports:

The results will not immediately change Hong Kong’s governance. Only half of the seats of the city’s 70-member legislative council are directly elected through universal suffrage; half are “functional constituencies” that give corporations, associations and chambers of commerce actual votes.

Yet the rise of young, independence and pro-democracy candidates means that those critical of Beijing’s influence will likely maintain the ability to veto policies proposed by the pro-China camp.

And it sends a clear message to Beijing: The battleground may have shifted, but the fight for Hong Kong is on.

[…] The interest does not mean that independence is likely, but it suggests how hard it will be for China’s leaders to win hearts and minds as the gap between Beijing and Hong Kong seems to grow. [Source]

At The New York Times, Michael Forsythe and Alan Wong look at the new challenges that China will face in light of the election results:

These new legislators stand apart from more established and moderate pro-democracy lawmakers who for decades have tried to work with Beijing while pushing for expanded direct elections. Their success speaks to the cost in public opinion that Beijing has suffered for its steadfast refusal to compromise on popular demands for greater participation in the selection of Hong Kong’s leader next year.

Outside Hong Kong, the Chinese authorities can deal with independence-minded minorities with an iron fist, suppressing movements in Tibet and in the western region of Xinjiang, for example, that are pushing for more autonomy from Beijing. But in Hong Kong, political freedoms are protected until 2047 by a mini-constitution that China agreed to honor to regain sovereignty over the city in 1997.

It remains to be seen how China’s central government will deal with these newly minted lawmakers, all of whom may be politically active for decades to come. The youngest is 23. A move by the Hong Kong election authorities to bar five candidates from running may have backfired. Turnout on Sunday spiked to a record, and the biggest vote-getter of any of the 35 legislators elected in geographic districts was one of the six upstarts, Eddie Chu.

“This is nothing short of a strategic setback for Beijing,” said Zhang Baohui, a professor of political science at Lingnan University in Hong Kong. “These people are now officially inducted into the political framework, and they are going to give Beijing a hell of a time in the future.” [Source]

AFP reports that China has issued a stern warning, stating that those advocating independence could be punished under the law:

In a statement late on Monday, China said it would not tolerate any talk of independence inside or outside LegCo. “We firmly oppose any activity relating to Hong Kong independence in any form, inside or outside the Legislative Council, and firmly support the Hong Kong government to impose punishment in accordance with the law,” state news agency Xinhua cited a spokesperson of the Hong Kong and Macau affairs office of the state council – China’s cabinet – as saying.

[…] In a separate column in the newspaper, a China-based academic said there could be legal challenges to lawmakers advocating independence, citing a law under which a candidate or group of voters can lodge a petition against an elected member they believe is ineligible or has acted illegally. [Source]

Time’s Dominique Rowe further quotes an op-ed on China Daily that suggested  barring “separatists” from Hong Kong’s legislature so that it can “conduct its meetings free from being annoyed by those advocating separatism.”