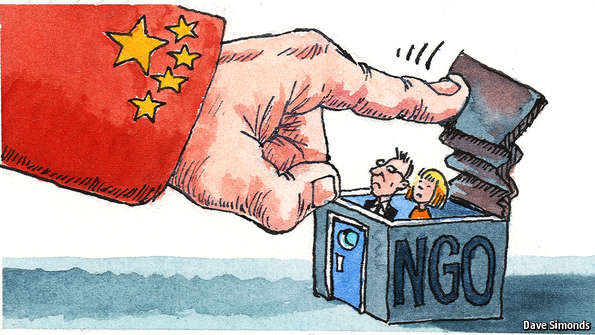 In April, the National People’s Congress passed the Foreign NGO Management Law, which aims to restrict and regulate the activities of foreign organizations operating in the country. The law’s heavy emphasis on national security generated concerns from human rights advocates about its potential to be used to crack down on activism after it goes into effect in January 2017. In a recent Q&A session with the European Chamber of Commerce, the Foreign NGO Management Bureau of the Ministry of Public Security—a new department set up to deal with the law—answered queries about its implementation. From Shawn Shieh’s NGOs in China blog:

Q: Is it correct that after the NGO Law becomes effective, there will be only two paths for foreign NGOs to conduct activities in China?

A: Yes. There are only two ways for foreign NGOs to carry out activities in China under the NGO Law:

1. Establish a representative office for long-term activities with the approval of the Professional Supervisory Authority and registration with the MPS; or

Q: Are there any further guidance/requirements on temporary activities conducted by foreign NGOs and their Chinese Partners?

Q: What is the intent of the requirement for foreign NGOs to make filings on their proposed temporary activities?

A: The reporting requirement is not to set limitations on a NGO’s temporary activities, but mostly to record the overall status of activities for statistical purposes. When temporary activities (such as disaster relief) must be carried out in emergency situations, it is permissible to file after the activities. The filing process is not expected to become a barrier for serving a good cause. [Source]

In the Q&A, the MPS assuaged earlier concerns by confirming that foreign universities would be exempt from the law as their activities are already regulated under the Ministry of Education.

Some observers have suggested that as domestic NGOs receive less funding and support from international groups once the law is implemented, they may benefit from closer cooperation with Taiwanese counterparts. From Olivia Yang at The News Lens:

Li [Jun] says that while civil society relies on local organizations rather than international NGOs, it is “hard to say” if domestic NGOs in China will continue to expand once foreign organizations pull out – talent, funding and regulations all play a crucial role in NGO development.

But, Li says, “This is an opportunity for Taiwan NGOs.”

The researcher points out that members of Chinese NGOs often travel to Taiwan and Hong Kong to cultivate social workers in community development and child protection services. These are areas in which Taiwan has more developed laws and experience.

Li believes that Taiwan NGOs can fill in the gaps European or American NGOs leave behind if they withdraw from China, and she emphasizes that organizations on both sides of the Taiwan Strait should learn from each other since there is less of a language barrier. [Source]

The funding for domestic NGOs in China is also more tightly restricted under the newly implemented Charity Law, which regulates charitable giving in the country. From dpa:

However, human rights groups say the wording of the law is too vague and restrictions will weaken some non-profit groups by restricting their access to domestic sources of funding in the world’s second-largest economy.

“The fact that organizations cannot violate ‘national security’, ‘public interests’, or go against ‘social morals’ is problematic since the government has often enforced these concepts in ways that are not consistent with international laws and standards,” said Amnesty International China researcher William Nee.

Charities which want to fundraise must first receive approval from the Ministry of Civil Affairs, and there will be an “exceptions” list of groups which has no appeals process.

“One group likely to be hit hard by the law will be friends and supporters of prisoners of conscience, who often put out calls for donations online,” said Frances Eve, China researcher for the Network of Chinese Human Rights Defenders. [Source]

China Law Translate has put together an infographic to show the various ways different types of social organizations are regulated in China. Read more about the Foreign NGO Law and the consultation process through which the government sought public comment, via a CDT interview with Steve Balla.