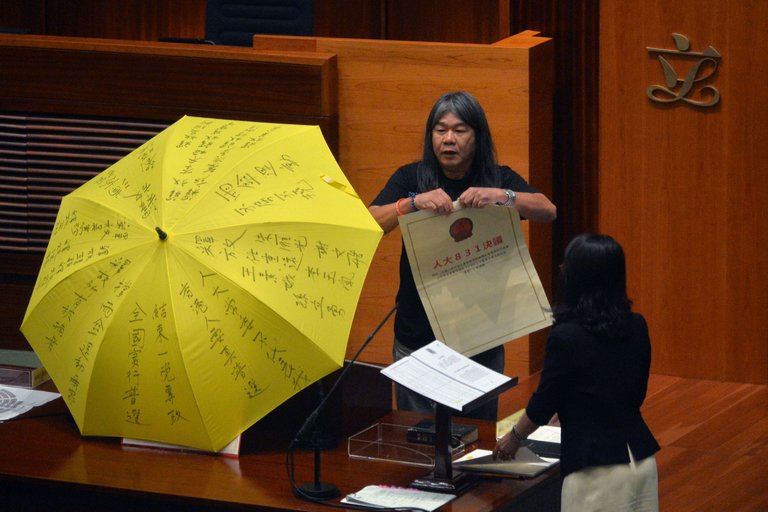 In September, a record turnout in Hong Kong elected a number of young pro-democracy and localist activists to the Legislative Council in the first elections since 2014’s “Umbrella Movement.” During the election, several candidates had been disqualified after failing to sign a required pledge confirming their support for a unified Hong Kong and China. This week, at the swearing-in ceremony, several of the newly elected legislators made their political views about Hong Kong-China relations clear by altering the words of an oath declaring their loyalty to the “Hong Kong Special Administrative Region of the People’s Republic of China.” From Venus Wu of Reuters:

Three newly elected Hong Kong lawmakers were barred from the legislature on Wednesday after using a swearing-in ceremony to raise the contentious issues of independence and more democracy, highlighting growing defiance of Beijing.

The three are among a new generation in the city, which returned to Chinese rule in 1997, demanding greater self determination, at least six of whom won seats in its 70-member legislature in an election last month.

Two of the new lawmakers pledged allegiance to a “Hong Kong nation” and displayed a “Hong Kong is not China” banner as they took their oath.

In response to their action, the head of the city’s Legislative Council Secretariat said he had no authority to administer the oaths to Yau Wai-ching, 25, and Baggio Leung, 30. [Source]

Alan Wong of The New York Times also reports on the protests:

One new legislator, Sixtus Leung, known as Baggio, took his oath with a banner draped across his shoulders that read “Hong Kong is not China.” And instead of swearing allegiance to the “Hong Kong Special Administrative Region of the People’s Republic of China,” he pledged allegiance to a “Hong Kong nation.” Mr. Leung, 30, a founder of the political group Youngspiration who advocates independence for the former British colony, then read the official text of the oath, as required by law. Except that he replaced the word “China” with the derogatory “Shina.”

His ally from Youngspiration, Yau Wai-ching, 25, slipped what sounded like a profanity into the phrase “People’s Republic of China” when she recited her oath.

The two were among several young political activists elected to the Legislative Council last month in the first major election after the pro-democracy protests of 2014 that became known as the Umbrella Movement. As the Chinese government refused to yield to the demand for greater public participation in the election of Hong Kong’s leader, the chief executive, the protests gave rise to new political forces demanding greater autonomy, if not independence, from the Chinese mainland.

The defiance by the pair at the ceremony was a direct jab to the Chinese government, whose top representative in Hong Kong had warned of “calamity” if advocates of independence were permitted to take seats in the legislature. [Source]

Tom Phillips of The Guardian has more on the oath and on a particular term used previously by Japanese to insult China:

Legco’s members were supposed to read a 77-word oath in order to officially begin their four-year terms in office.

That oath contains a pledge to uphold the laws put in place after the former British colony returned to Chinese control in 1997, as well as to “serve the Hong Kong special administrative region conscientiously, dutifully, in full accordance with the law, honestly and with integrity”.

But [Sixtus “Baggio”] Leung refused to stick to the script, telling the chamber his loyalties lay with a place he referred to as “the People’s Republic of Shina”. Shina is an archaic and derogatory way of referring to China in Japanese.

As he read the altered oath, Leung kept the fingers of his right hand firmly crossed. [Source]

At Quartz, Zheping Huang writes that “Shina” is in fact a racially derogatory term that is very offensive to mainland Chinese:

Shina is an archaic way of referring to China in Japanese. It originated from Cina in Hindu texts (pdf, p. 7). The word was used neutrally in both Japanese and Chinese until Japan invaded China during the Second World War. Since then, it’s been widely considered an offensive racial slur aimed at Chinese people. In 1946, the Japanese government banned the term (link in Japanese) in any formal publications, at the request of Republic of China’s government.

Shina is as offensive to Chinese people as the n-word is to black people, according to a commentary about Yau’s oath (link in Chinese) in HK01, a digital publication advocating self-determination for Hong Kong. The racial slur is just as offensive in Hong Kong, Macau, or Taiwan as it is in mainland China, it added, with the most recent headline-grabbing outburst being in 2014, when Hong Kongers taunted Chinese tourists and immigrants as “locusts” and Shina on the streets and online.

Read more about the treatment of mainland tourists in Hong Kong, via CDT.

At the same swearing-in ceremony, Wong Ting-kwong, a pro-China legislator, was also singled out for leaving out the words “Hong Kong” in one instance while repeating his oath, although he declared it an oversight rather than an intentional slight. Unlike the protesters, Wong was accepted to the legislature, though he requested to redo his swearing in. From Kris Cheng at the Hong Kong Free Press:

When approached by a reporter from Oriental Daily, Wong was in disbelief that he had missed the words. But he then admitted the mistake after he watched a recording supplied by the reporter.

“It was an unintentional mistake,” he said. “I put effort into reading it – if the clip did confirm I missed the words, I must apologise to the public.”

When asked whether there was any difference between his mistake and the oaths taken by the three lawmakers which were not confirmed by the LegCo secretary-general, he told the newspaper that his mistake did not stray from the principle of the oath. He said the three other incoming lawmakers were intentionally conducting dishonourable actions during the oath taking. [Source]

Beijing has condemned the oath protests, saying that they “hurt the feelings” of Chinese people:

“The oath-taking by members when assuming office upon the commencement of the new Legislative Council term is not just to ensure compliance with the law, but also a solemn promise they make as public officers to the entire community,” the government said in a written statement denouncing their behavior.

“Some behaved in violation of the dignity expected of Legco members, or even spoke or acted in an offensive manner that harmed the feelings of our compatriots.” [Source]

Hong Kong Free Press and others have compiled videos of the protests: