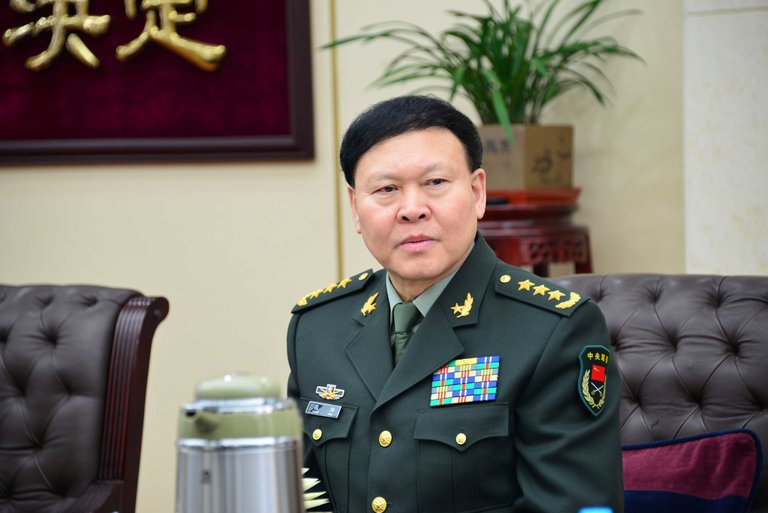 Zhang Yang, the former head of the Central Military Commission’s political work department, committed suicide last week, according to Chinese state media reports. At the time of his death, Zhang was under investigation for graft and his connection with two corrupt former senior military figures, Guo Boxiong and Xu Caihou. Sui-Lee Wee at The New York Times reports:

The general, Zhang Yang, was found dead in his home in Beijing after hanging himself on Nov. 23, the state-run Xinhua news agency said, citing China’s Central Military Commission. The report said General Zhang was living at home while being questioned in connection with corruption charges.

[…] It is extremely rare for high-ranking Chinese officials to commit suicide even when under investigation, in part because they will most likely be spared the death sentence.

But a growing number of lower-level officials have killed themselves in recent years as the anti-graft campaign has picked up pace. From 2009 to August 2016, 243 officials committed suicide, with the numbers rising after Mr. Xi launched his anti-corruption campaign in 2012, according to the official WeChat social media account of the state-owned media group that publishes The Beijing News.

In its report of the suicide, Xinhua said the general committed “serious violations of discipline and the law and was suspected of the crimes of bribery as well as huge amounts of assets in which the sources are unknown.”

Xinhua said that at the time of his death, General Zhang was being investigated for links to Guo Boxiong and Xu Caihou, the two highest-ranking army commanders netted so far in Mr. Xi’s crackdown. [Source]

News of Zhang’s suicide was delayed for several days before it was released by state-run news agencies. The death has since been portrayed in a negative light and described as a move to escape punishment from the party. Steven Jiang and James Griffiths at CNN report:

In a scathing commentary published by the People’s Liberation Army Daily Tuesday, the paper said he “wanted to evade punishment by party discipline and state law by committing suicide — such behavior was extremely despicable.”

Party officials have warned for years of corrupt officials “escaping” justice through suicide. Anti-grawft scholar Lin Zhe wrote in the state-run China Daily in 2014 that many top officials kill themselves to end the investigation before it potentially implicates family members or stashed-away wealth.

“By escaping from judicial and possibly disciplinary penalties once and for all, the officials suspected of corruption can not only preserve their titles and honor, but also preserve the material gains they have made for their families, since their illegal income will no longer be confiscated,” Lin wrote. “Considering the astonishing sums of money an official can obtain through corruption, that’s a good deal for them and their families.” [Source]

Some observers believe the public condemnation of Zhang is an indication that President Xi Jinping will not only continue but also intensify his crackdown on corruption, which he has used to purge the Chinese leadership of rivals and bolster his position within the party and the military.

In addition to Zhang, General Fang Fenghui was also put under investigation for bribery at around the same time. From Minnie Chan at South China Morning Post:

Zhang and another military heavyweight, former chief of general staff General Fang Fenghui, were left off the list of PLA delegates to the party’s national congress in Beijing last month.
In late August, state media reported that Fang’s had been replaced as chief of general staff by war hero General Li Zuocheng, while Admiral Miao Hua had taken over Zhang’s political work in the CMC.
Sources close to the military told the Post earlier that both Zhang and Fang were taken away for questioning over corruption on the same day soon afterwards.
[…] “Zhang’s death may affect other anti-graft inspection work because his case involved many other military officers,” he said. “He may have wanted to use his death to protect friends involved in his case.” [Source]

Although censors have been closely monitoring public discussion of the general’s death, the event nonetheless sparked a debate on social media over the possible circumstances surrounding Zhang’s suicide. From Kerry Allen at BBC:

Zhang’s death has been a major talking point on Chinese social media, although many users expressed surprise they were freely able to comment, given its political sensitivity.

Many Sina Weibo users are asking why it took five days for official media to announce the death. One said: “[The government] needed to make sure all the major media had their manuscript ready in advance.”

Some users expressed surprise he was able to take his own life, given he was being investigated.

One says, in a carefully worded Weibo post: “It’s said it was suicide, but in fact…”

Another user says: “The dead cannot speak,” and another that: “If he’s dead, he can ‘protect’ more people.” [Source]