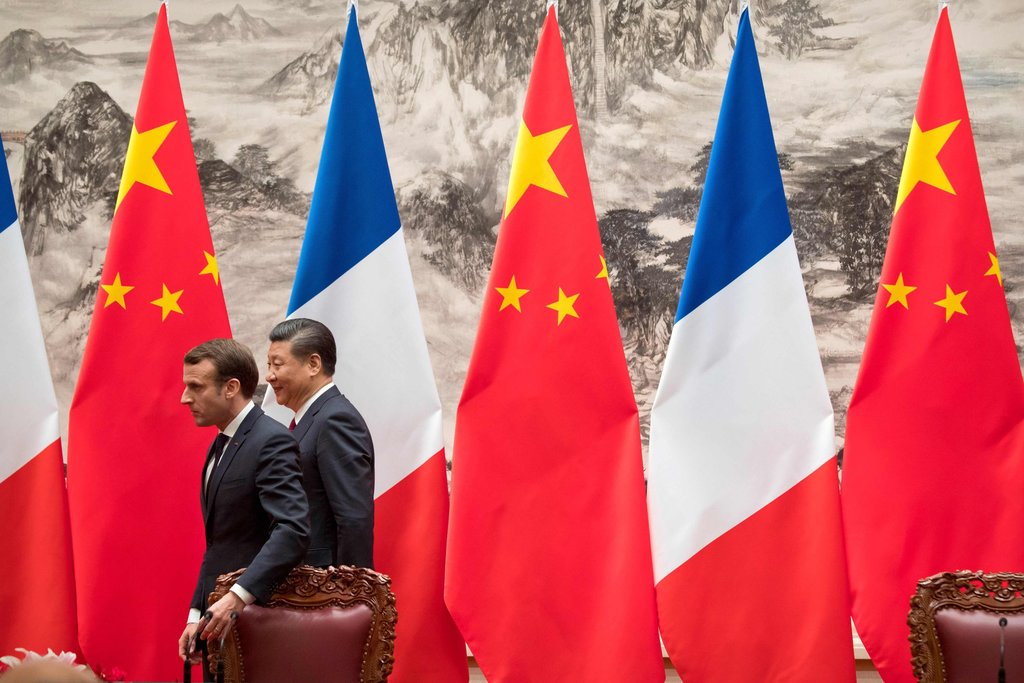 During his first official visit to China this week, French President Emmanuel Macron sought to strengthen ties with Beijing as he aims to develop a strategic partnership with China based on an alternative vision to that offered by the United States. As part of the visit, the two sides released a Joint Declaration between the People’s Republic of China and the French Republic, available via Xinhua. Javier C. Hernández at The New York Times reports:

Mr. Macron and President Xi Jinping, during meetings this week, articulated a vision sharply at odds with Mr. Trump’s worldview. They spoke of a need for free trade and rallied against protectionism. They embraced multilateralism and praised institutions like the United Nations.

[…] Ding Chun, the director of the Centre for European Studies at Fudan University in Shanghai, said a stronger alliance between France and China was natural given that the two leaders had similar views.

“Both President Xi and President Macron think differently from Trump’s ‘make America great again’ philosophy,” Mr. Ding said. “They both believe in opening up and multilateralism.”

Analysts said Mr. Macron was positioning himself as a reliable ally of China at a time when much of the West is in disarray. The United States, under Mr. Trump, is withdrawing from the world stage, and Britain and Germany are grappling with domestic political struggles.

“Macron in a way is trying to represent the West to China,” said Jean-Philippe Béja, an emeritus senior research fellow at Sciences Po in Paris. “There’s an attempt at lifting China as a partner on the world scene.”  [Source]

To woo China’s leaders, Macron learned to say “make the planet great again” in Mandarin and gifted an elite horse from the French presidential cavalry. Macron’s “horse diplomacy” has drawn attention on Chinese social media as netizens offered various interpretations of the meaning behind the gesture. Despite Macron’s charm offensive, the French president’s influence was limited when it came to getting better market access to China’s booming market. Boosting bilateral trade and securing lucrative commercial contracts were at the top of Macron’s agenda together with geo-strategic issues. From Michel Rose at Reuters:

Macron toured a Beijing aerospace facility where China and France are co-developing an observation satellite that will help measure climate change.

[…] But no sooner had Macron passed through a decontamination airlock and stepped into a giant hall, he was reminded of China’s exploration ambitions, receiving an extensive overview of Beijing’s plans to explore the Moon and Mars.

“Is there any embedded technology from (French engineering firm) Thales in there?” Macron asked his hosts as he peered over an intricate diagram.

A blunt answer came back: No. This was 100 percent Chinese technology. [Source]

FRANCE 24: Have there been great expectations in the lead up to Macron’s visit to China?

Jean-Louis Rocca: Not really, because for China, the countries that matter are the US, Russia, Japan and, in the current context, North Korea. France is seen as a historical partner, but today, it is far more associated with lifestyle – perfumes, fashion, romance… It is not perceived as a particularly important political partner. Even in Europe, Germany is taken more seriously.

Chinese diplomacy is about expanding its influence in the world and, therefore, developing its relationship and partnerships with France is part of that policy. But this is not an isolated case. This needs to be put in perspective with Latin American countries, Africa and what China has been doing since 2013 with its new “Silk Road”.

F24: Macron’s China visit has come fairly early in his five-year presidential term. Does this represent a different approach from that of his predecessors?

JLR: Slightly, yes, because he seems more interested in developing relations with China than [former French presidents] François Hollande and Nicolas Sarkozy. It’s closer to the vision of Jacques Chirac, who was behind the [2004] signing of the global strategic partnership, which includes cooperation in areas such as economics, culture and diplomacy. But it’s still very traditional to have the economy and business development dominate the agenda. Hooking up with the Chinese engine today is fundamental. This is the only country where strong domestic growth is able to boost global growth. China is an indispensable partner today. [Source]

Macron’s attempt to reinvigorate trade relations with Beijing comes at a complex time in EU-China relations as some European leaders grow increasingly weary of Chinese investments in competitive industries and infrastructure projects on the continent. At Euractiv, Harry Nedelcu looks at the extent of Chinese direct investment in Europe and the risk of state capture from foreign influence.

At the onset of the financial crisis in Europe, Chinese foreign direct investment in the EU was just under €2 billion. Seven years later, it increased by almost 2,000%, reaching €35 billion. All the while, EU investments in China have fallen by 25% as they are being squeezed out of the Chinese market.

[….] What is alarming is that companies linked to the Chinese state are investing strategically in new technologies and know-how – some of which having not just civilian but also military applications. Already, French, German and British technology has found its way on Chinese aircraft, surface vessels, and submarines.

To say that the trend is raising red flags is an understatement. Under the auspice of free-trade, EU states are at risk of losing both their technological edge as well as their ability to formulate an independent foreign policy. [Source]

As Macron prepares to play a key role in President Xi Jinping’s “One Belt, One Road” initiative–a trillion dollar trade and infrastructure project that aims to connect Asia, Europe, the Middle East and Africa with vast transport networks–he is mindful to address fears that the modern-day Silk Road will become a one-way road serving Chinese interests.

“After all, the ancient Silk Roads were never only Chinese,” Macron told an audience of academics, students and business people at the Daming Palace, the royal residence for the Tang dynasty for more than 220 years.

“By definition, these roads can only be shared. If they are roads, they cannot be one-way,” he said.

Unveiled in 2013, the Belt and Road project is aimed at connecting China by land and sea to Southeast Asia, Pakistan and Central Asia, and beyond to the Middle East, Europe and Africa.

Xi pledged $124 billion for the plan at a summit in May but it has faced suspicion in Western capitals that it is intended more to assert Chinese influence than Beijing’s professed desire to spread prosperity.

Macron, who pledged to visit China at least once every year during his mandate, said the new infrastructure and cultural projects promoted by China could also be in France’s and Europe’s interest if done in a spirit of cooperation.

“These roads cannot be those of a new hegemony, which would transform those that they cross into vassals,” Macron said. [Source]

Aside from trade and geopolitical topics, there was no discussion of China’s human rights record.

As expected President Macron remains silent on human rights / rule of law issues in China, saying public diplomacy is “useless” on these issues (a defensible point) while private diplomacy “works” because Xi cares about universal values (a plain lie). https://t.co/ZNvQBSKAvf

Chinese artist and activist Ai Weiwei has criticized the French president for refusing to publicly call for rights improvements in China. Macron’s weak positions the issue of rights abuses is the latest example of how countries are increasingly putting their commercial interests with Beijing ahead of universal values. From Romina McGuinness at Sunday Express:

Mr Ai, a prominent artist and activist who was tortured by Chinese police before fleeing to Germany, told Europe 1 radio: “Mr Macron did not publicly speak out against China’s human rights record for a simple reason: he was on a business trip.

“But any leader with respect for the history of humanity has a duty to speak out – and this louder than anyone else – against the violation of human rights.”

Mr Macron, who is barely nine months into his presidency, said on Tuesday the had voiced his concerns about Beijing’s human rights track record with his Chinese counterpart Xi Jinping “in private”.

Mr Macron told reporters: “Mr Xi is aware of the human-rights related concerns in Europe, especially the need [for China] to respect fundamental rights and freedoms.

“I know that this is an important issue for him… But our discussion took place behind closed doors”. [Source]

Human Rights Watch urged President Macron to, among other steps:

Ask Chinese leaders how French companies can operate in China given increasing censorship of the internet and restrictions on Virtual Private Networks (VPNs);

Express concerns about China’s anti-rights conduct at the United Nations and with Interpol; and

Inform Chinese counterparts that France will undertake a thorough review of all law enforcement cooperation with a view toward suspending it in areas in which China appears unwilling to abide by international human rights protections. [Source]

“Rather than give Xi Jinping a French horse, Macron should have given him an autographed copy of the “French Declaration of the Rights of Man and of the Citizen.”@KenRoth in The Daily Brief:https://t.co/2VPWHv1WIt pic.twitter.com/f85SWFssXn

If #France .@emmanuelmacron thinks visiting an art gallery counts as #HumanRights diplomacy he (and his horse) should just stay home. https://t.co/hGN1AvufyX