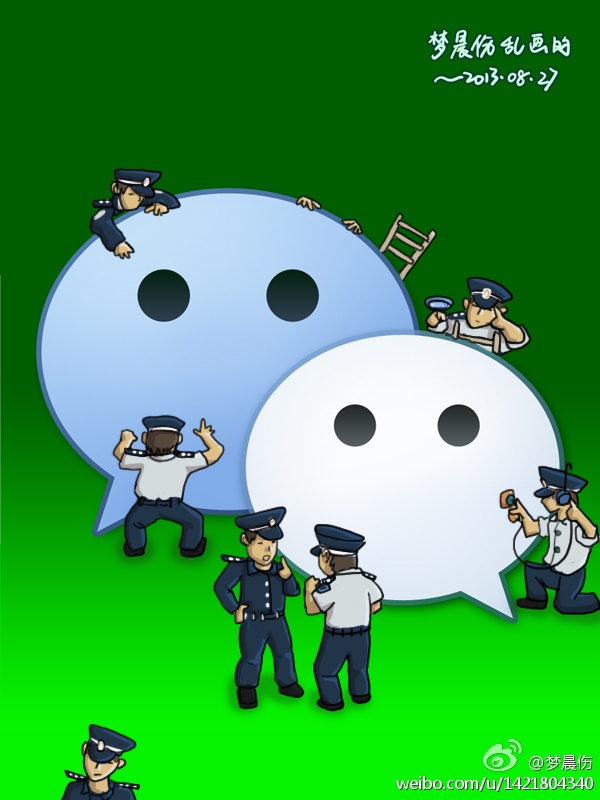 Last Sunday, the Australian Financial Review reported that Australia’s Defense Department has banned Tencent’s WeChat messaging app from its staff’s work devices. The move comes amid mounting concern about Beijing’s influence in Australia and a steadily mounting pile of observations and accusations of monitoring and censorship of WeChat messages. Global Times’ Deng Xiaoci quoted indignant responses from Chinese experts to the Australian ban:

[…] The Australian government’s decision reflected "narrow nationalism," without any flexibility, Li Yi, a senior research fellow at the Internet Research Center under the Shanghai Academy of Social Sciences, told the Global Times.

Canberra was showcasing its strong desire to pander to US interests in the region by containing China, he said.

[…] Australia was "on the one hand demanding Beijing open up for US-backed services like Facebook, while on the other banning Chinese apps, for its own best interest," Yu Lei, a research fellow at the Oceania Research Center of Sun Yat-sen University in Guangdong Province, told the Global Times. [Source]

The ban, however, applies only to Defense Department staff, and only to their work phones. On Friday, the Australian Home Affairs department said that it would not impose a similar ban on MPs or its own staff, though it welcomed the Defense Department policy as "a timely reminder of the risks posed by third party suppliers in our ICT supply chain." Elsewhere, the Australian Broadcasting Corporation reported earlier this month that "more than 10,000 shops and restaurants in Australia are already using the WeChat Pay system and more than 2.5 million Australians are believed to own the app."

Analysts said the ban on WeChat for military personnel was most likely a political move, but was in line with policies in other countries.

“It is obvious that Australia is standing on the same side as the US and follows its steps. The WeChat ban is more a political behaviour to show its support for the US,” said Li Yi, chief fellow at the Shanghai Academy of Social Sciences.

“However, it is understandable that the Australian defence department banned staff from using WeChat on concern over messages being monitored by the Chinese government,” Li said.

“It is the same story in most countries, where defence departments have to use authorised software. WhatsApp and Facebook are completely banned in China,” he said. [Source]

If restrictions on WeChat are meant as a gesture of solidarity with America, the Defense Department’s position on U.S. tech products might muddy the message somewhat. It allows only limited use of Facebook, while a security assessment of the company’s WhatsApp messaging service is reportedly still underway.

The Australian Strategic Policy Institute, meanwhile, offered a Q&A on the ban with Danielle Cave, Fergus Ryan, and Tom Uren from its International Cyber Policy Centre.

Are you surprised by this development?

[…] Danielle Cave: No, this isn’t surprising. Let’s keep in mind how limited this ban is: according to Australian media reports, they’ve banned staff from downloading and using WeChat on their work phones only. This ban goes nowhere near as far as India’s, for example, where the media has reported that the Indian government has requested that their defence personnel remove more than 42 Chinese apps from both their work and personal phones. It’ll be interesting to see if other departments, particularly DFAT, follow Defence’s lead.

Tom Uren: The default position is that work phones are provided with a limited range of apps. Essentially all apps are banned unless there’s a requirement to have them and they pass a security assessment.

What’s behind the ban? What’s Defence likely concerned about? Have they made the right call?

[…] Danielle: Defence has made the right call and I suspect others will follow, both in Australia and around the world. The Chinese government is increasingly investing in surveillance and censorship, and we know that messages within WeChat are monitored and censored. China’s new cybersecurity law requires all companies to store relevant data and WeChat’s own privacy policy is very broad. Amnesty International ranked the privacy and encryption of WeChat’s parent company Tencent very poorly, and Tencent also scored very poorly (20/100) in the New America think tank’s 2017 ranking of digital rights and corporate accountability. It’s not surprising that WeChat didn’t pass a security assessment. [Source]

On Twitter, Ryan responded to the critics quoted by Global Times:

It’s a bit rich for experts from China – where Facebook & Twitter are banned – to complain about the Australian @DeptDefence's WeChat ban. https://t.co/H93s9jL1CD

As @daniellescave points out, the ban is quite limited and goes nowhere near as far as India’s, where defence personnel have been instructed to remove more than 42 Chinese apps from both their work and personal phones. https://t.co/Lz6EN0RPQe

As @DaniellesCave puts it: “To flip the situation, the Chinese government is incredibly strict about what social messaging apps they allow their population use, let alone their defence personnel!”

It’s good to see internet expert Li Yi’s suggestion that there be room for negotiation with Tencent & others when it comes to addressing security concerns – though I doubt in this case @DeptDefence is likely to ever budge.

To kick off the negotiation, how about we start with Tencent publishing their censorship rules? A transparency report that discloses govt requests for user data would be great too!

At Foreign Affairs, John Garnaut describes the background to the Defense Department’s wariness, explaining "How China Interferes in Australia, And How Democracies Can Push Back":

Australia is the canary in the coal mine of Chinese Communist Party interference. Over the past 18 months, the country has been shaken by allegations of the Chinese party-state working to covertly manipulate the Australian political system and curate the wider political landscape. There are claims of Beijing-linked political donors buying access and influence, universities being co-opted as “propaganda vehicles,” and Australian-funded scientific research being diverted to aid the modernization of the People’s Liberation Army (PLA). Most notoriously, an ambitious young senator, Sam Dastyari, was exposed for parroting Communist Party talking points and giving countersurveillance advice to a Chinese political donor before being hounded into premature retirement.

[…] The Australian conversation has evolved from amorphous anxieties about Chinese influence and soft power into more precise concerns about covert interference by the Chinese Communist Party. Media reports are shedding light upon a hidden world of inducements, threats, and plausible deniability. They reveal a dimension of risk that sits between the poles of economic attraction and military force, which Western Sinologists, diplomats, and national security officials had not previously focused on. The more we learn, the more it seems that there is little that is soft about the way the party wields power beyond its borders.

The distinctive part of the Australian experience is not what China is doing there but how Canberra is pushing back in the face of threats from Beijing and pressure from local business leaders worried about economic retaliation. Clarity of diagnosis has set the stage for a surgical response—one that manages the risks and targets the harm while attempting to maintain the overall project of engagement. This is not an easy balance to strike, but Australia’s efforts to do so should be closely watched by leaders from Berlin, Ottawa, Washington, and Wellington—who may soon find themselves in a similar position. [Source]

Australia’s experience also featured in an overview by The New York Times’ Liz Alderman of mounting Western wariness of Chinese investments on Thursday:

In Australia, where Chinese foreign investment reached more than $30 billion in 2014 alone, the government has sought to toughen screening.

Wariness of Beijing’s growing economic influence has increased as Chinese investors buy up vast swaths of the Australian economy and over concerns about Chinese businessmen giving millions of dollars to Australian politicians. Chinese takeovers of Australian businesses have jumped in recent years, along with an acceleration in purchases of agricultural land.

In 2015, the government strengthened foreign acquisitions and takeover rules to require the approval of a national oversight board if, for instance, a foreign purchaser’s portfolio of farmland was worth $15 million or more. It has also blocked bids by a Chinese firms for Australian electricity companies, citing such deals as contrary to the national interest.

More changes could be afoot. The government recently said it would consider updating its foreign investment guidelines so Australians could be sure that proposed investments were “good for the country.” [Source]