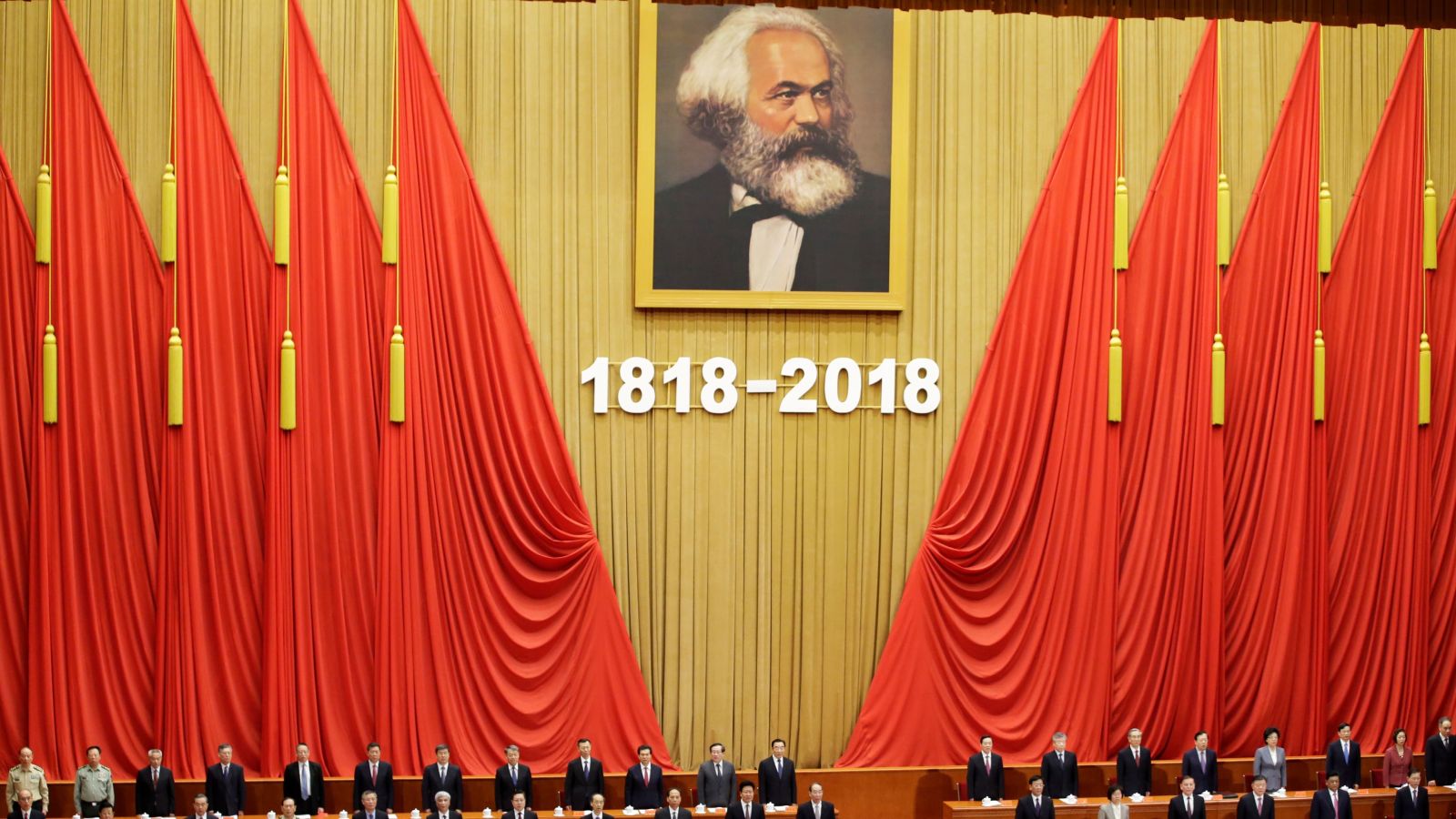 On Friday, President Xi Jinping delivered a nationally televised speech at a commemorative conference marking the 200th anniversary of the birth of Karl Marx. Addressing hundreds of top government officials, Xi lauded the German philosopher’s contributions to China’s socialist revolution and urged members of the ruling Communist Party to go back to the roots of Marxism. From South China Morning Post:

In a speech at the Great Hall of the People in Beijing on Friday, Xi said, “Writing Marxism onto the flag of the Chinese Communist Party was totally correct … Unceasingly promoting the sinification and modernisation of Marxism is totally correct.”

“Today, we commemorate Marx in order to pay tribute to the greatest thinker in the history of mankind and also to declare our firm belief in the scientific truth of Marxism,” he said.

“We must win the advantages, win the initiative, and win the future. We must continuously improve the ability to use Marxism to analyse and solve practical problems,” Xi said beneath a massive portrait of Marx on a stage bedecked with scarlet and gold curtains.

Xi also instructed all party members to adopt the reading of Marxist works and the understanding of Marxist theories as a “way of life” and a “spiritual pursuit”. [Source]

President Xi: CPC members shall always be the guardians of Marxism pic.twitter.com/MaFd4cfvau

The speech comes at the end of a week of commemorative events that included the gifting of a large bronze statue of Marx to his hometown of Trier, Germany, where the gesture has set off protests amid controversy over whether accepting the statue would be seen as condoning rights abuses in China.

The party’s appropriation of Marxist ideology has long undergone several iterations since the start of market reforms in 1978.

After reforms began, China transformed Marx from a prophet of revolution to an inspiration for productivity gains.

In 1971, he was featured in posters captioned “long-live the dictatorship of the proletariat,” but by 1979 the captions read, “science is the force of production” pic.twitter.com/MGLLNwTIRt

Except for much of what Marx actually said, including his passionate defence of free speech and freedom of the press https://t.co/OjlPXztCpU

At Quartz, Zheping Huang looks at why China’s celebration of Marx is not about reviving Marxism per se but about using it as a tool to bolster the legitimacy of the Chinese Communist Party at home and boost its power abroad.

China’s celebrations of Marx aren’t about Marxism but about its own political model. Since taking power in late 2012, Xi has repeatedly called for greater confidence in China’s chosen path, theory, system and culture—together known as the “four confidences”—amid concerns about the Communist Party’s ever tightening controls over the Chinese society. More recently, a globalist Xi has floated the idea that the political system of “socialism with Chinese characteristics” can be a model for the world. During this year’s Davos forum, Chinese state media stated outright that the world should choose between Xi’s “shared future” vision and Donald Trump’s “America First” policy—two contrasting outlooks for humanity.

[…] Xi’s speech on Friday reiterated almost all the points above. On some level, the Communist Party is always dependent on Marxism to prove its legitimacy and justify its ways of ruling—and Xi, who has upended key party conventions in recent months, perhaps feels the need to fervently emphasize the party’s commitment to its ideological underpinnings.

Chinese political theorists quoted by state-run media ahead of Marx’s birthday insisted that, as Xi says, China’s version is a modern interpretation of Marxism.

“Actually Marx already predicted that there could be a kind of socialism which combined socialist principles with the achievements of Western capitalist civilizations but he didn’t say how this kind of socialism would work since there was no evidence available during his lifetime,” Su Wei, a professor at a party school for ideological training in Chongqing, in southwestern China, told the Global Times. “By making China prosperous and developed, socialism with Chinese characteristics proves Marx’s prediction.” [Source]

However, there are indications that Xi Jinping may be a firmer believer of Marxist principles than his most recent predecessors. From ABC’s Bill Birtles:

For starters, Mr Xi has tightened ideological controls, reversing a trend started under former supreme leader Deng Xiaoping in the 1980s to gradually loosen them.

Secondly, he has moved to reassert Communist Party guidance of the economy by raising the profile and importance of party committees at major state-owned, private, and even foreign companies.

Most significantly, he has reportedly been pushing to give the party a direct stake and management role in some of the country’s major tech firms — a step that, if implemented, would see the Communist Party take some control of the private sector’s most successful companies.

[…] Mr Lam described the Chinese leader as more of a “closet Maoist”.

“He believes even though China should go around the world with an open-door policy, the party-state apparatus should still be largely in control of the economy,” he said. [Source]

For most ordinary Chinese, Marxism has long lost its significance. Those who still find the ideology relevant to the advancement of social justice have been met with resistance from the state. Xinyan Yu at Ink Stone reports:

Today, young people growing up in China still all have to study Marxist thought in school: but these thoughts seldom foster the same loyalty as when the party was founded in 1921.

“Many young Chinese know Marx’s theory of materialism,” Li Lizhu, a philosophy doctor’s student at Peking University told Inkstone. “But few are encouraged to engage in political discussions or to read about Marxism in its original text.”

[…] Some of those who are truly interested in Marxism, however, are barred from exercising its doctrines, which encourages the working-class proletariat to rise up against oppression.