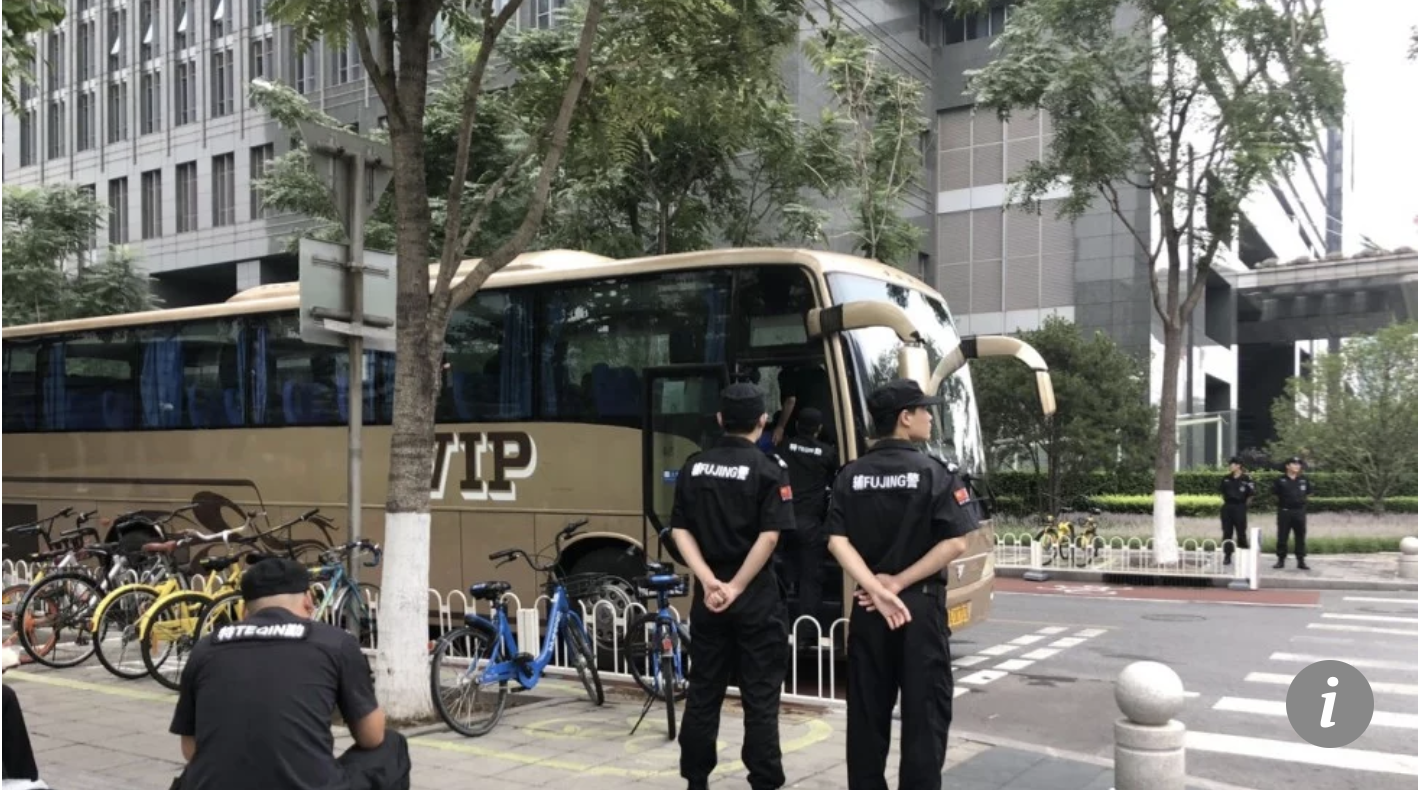 In recent months, the collapse of China’s peer-to-peer (P2P) loan industry has eradicated the life savings of many individuals who had put their money in the high-risk, high-return schemes. Once valued at 1.3 trillion yuan (US$191 billion), P2P loans grew quickly in recent years and became a popular way for individual investors and small businesses to be connected with borrowers or lenders. But the industry has not been well-regulated, and a recent government crackdown and decreased liquidity have led to the collapse of hundreds of P2P platforms. New government regulations required P2P platforms to undergo a review and registration in June, but many failed to do so. In July, 165 lending platforms stopped allowing withdrawals, while other platform owners disappeared with investors’ money.

On Monday, thousands of P2P investors gathered in Beijing from around the country to protest outside the offices of the China Banking Regulatory Commission, but were quickly intercepted and put on buses by police who had been awaiting their arrival. AFP reports:

Enraged over financial losses, petitioners told AFP they had come from every corner of China – from the southernmost province of Guangdong to the far-west region of Xinjiang – in hopes that by gathering en masse, the government would recognise their grievances and take action.

But authorities appeared to have other plans.

More than 120 buses lined the roads around the China Banking Regulatory Commission, where the protest was supposed to take place. They stretched all the way to Beijing’s Diaoyutai state guesthouse some 3km away.

Security forces rounded up groups of petitioners from the surrounding streets and parks and drove them away in the buses under police escort.

[…] A policeman told AFP they would be taken to a neighbourhood on the outskirts of Beijing, where China maintains what rights activists describe as “black jails”. Petitioners are typically held there until minders escort them back to their home towns. [Source]

CDT Chinese editors have archived a screenshot from a WeChat user announcing the crackdown on petitioners, which CDT has translated: 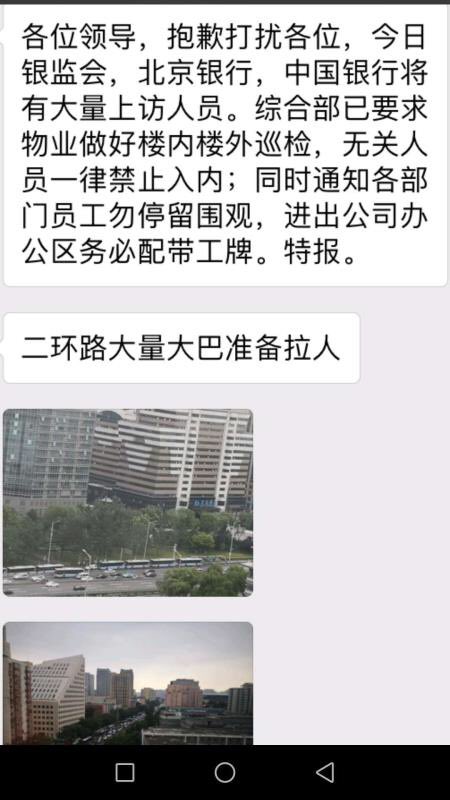 Leaders, sorry to bother you all, but today the China Banking Regulatory Commission, Bank of Beijing, and Bank of China will each be visited by a large number of petitioners. Miscellaneous departments have already implemented patrols in- and outside of the building, and all but authorized staff are prohibited from entering. At the same time, all department employees have been notified not to stop and surround and watch, and that they need to wear badges and carry special authorization when entering and leaving the office.

On the Second Ring Road, many busses are waiting to pull people. [Chinese]

In another screenshot by CDT Chinese, a victim of the P2P fraud describes his experience being prevented from going to Beijing at a checkpoint, an excerpt of which has also been translated by CDT:

I didn’t initially call the police, I was driving myself back to Beijing and was stopped at a security check in Hebei. The police swiped my ID several times then said I was a financial fraudster. Fuck! I was startled, I was clearly the victim of banking fraud. I glanced at the screen and it showed my joint banking information. At first I didn’t know what was going on, and thought there must be someone in charge, then it became clear: they were afraid I was going to Beijing to petition! Hah, fuck! [Chinese]

Have truly never seen anything like this in Beijing. We counted 120+ buses at site of the (failed) protest against P2P lending fraud, stretching far as the eye can see – all the way to Diaoyutai. Cops nap, wait in each. Petitioners rounded up, shipped off inside. The SCALE..! pic.twitter.com/97I93XTEUl

There has been much Chinese-language discussion of the protests and crackdown on petitioning victims on Twitter. Commenting on the situation, Twitter user @xianjie2048 quipped that “P2P has in the end changed from ‘peer to peer’ into ‘police the people’.”

Hundreds of uniformed police, ancillary police and plain clothes officers patrolled several city blocks around Finance Street, where the central bank, as well as the regulators for stocks, banks and insurers are located.

Alex Li, a 35-year-old organiser of the demonstration, said disgruntled investors from all corners of the country had gathered in the capital city over the weekend to petition the central government.

“At least 8,000 investors have made it to Beijing,” Li said by phone from Beijing. The number could not be immediately verified.

Hundreds of investors had attempted to gather outside the head offices of state agencies on Monday, including the China Banking and Insurance Regulatory Commission (CBIRC), to press for an official investigation into the suspensions of fund withdrawals in more than 100 lending platforms last month, Li said. No demonstrators could be seen around the Finance Street area on Monday. [Source]

At TechCrunch, Jiefei Liu reports on the rise and collapse of China’s P2P lending sector:

Stories have been circulating across Chinese social networks about desperate investors who have lost their life savings. Zhang Xue, for instance, a 47-year old single mother with a 13-year-old son, was reported to have lost the 3.8 million RMB her husband left her with when he died of a heart attack. “I am totally desperate. 3.8 million RMB. It’s finished, all finished,”” she told local media.

Some of those affected protested in front of police stations and chanted the Chinese national anthem, March of the Volunteers, in an effort to pressure authorities. Others organized online investor rights groups, making a collective effort to get the money back.

Together, the protesters made headlines in domestic media and sparked intense online debates on who is responsible for the losses and where the industry is heading.

[…] Default rates have been soaring since June. In May, only 10 platforms were considered in trouble. But by June, that number had increased to 63. By the end of July, 163 platforms were on the concern list. The Home of Online Lending (网贷之家), a platform that compiles the data, defines ‘troubled’ as companies that have difficulty paying off investors, have been investigated by national economic crime investigation department, or whose owners have run away with investors’ money. [Source]

In recent months, slowing investment growth and escalating trade tensions with the U.S. have led to concerns over an economic slowdown in China and reported disputes among the top leadership about how to handle these challenges.