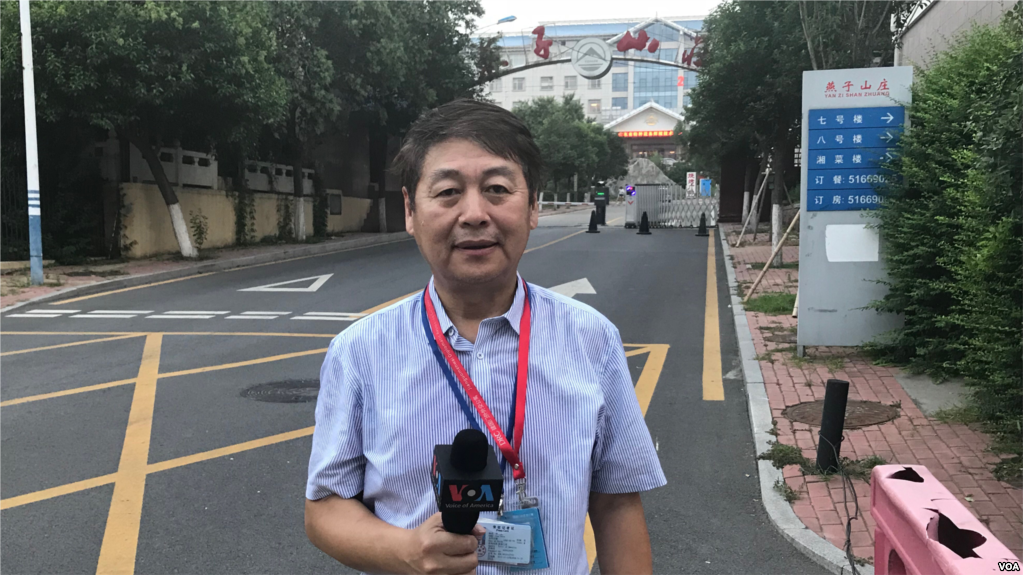 Two journalists working for the U.S. government-funded Voice of America were detained for about six hours on Monday after attempting to interview Professor Sun Wenguang, who is being kept under tight surveillance at his home after an interview with VOA earlier this month. VOA correspondent Yibing Feng and VOA contractor Allen Ai were detained and questioned by police after arriving at Sun’s home in Jinan, Shandong, and speaking with him through his door. Haiyang Zhang reports for VOA:

Authorities in the apartment hallway attempted several times to disrupt the interview and ordered Feng and his Chinese assistant to leave the building. The two reporters were then held by police at the building exit.

[…] On Monday, the professor shouted answers to VOA’s questions from behind a locked door saying that he was moved to several locations after being detained August 1, including Yanzi Mountain Villa at Jinan Military Region, a military-linked hotel and reception center in Jinan, his hometown. He was taken to four places, often staying for one or two days under a security watch, he said.

“Now I have been locked in at my dwelling,” he said. “My wife and I have been in a forced trip outside our residence for 10 days and we stayed in four hotels. And now we are back to our home finally. But they sent four security guys to sleep in our home.

Here in China, we have a lack of freedom of press,” the professor said. “Authorities have blocked and suppressed press freedom. Chinese authorities have a practice of trade barrier and press barrier. Why can Chinese reporters act as journalists in the U.S. freely while U.S. reporters cannot do normal journalistic work in China?” [Source]

A VOA reporter and a VOA freelancer were detained Monday by Chinese police while attempting to interview Sun Wenguang, a retired Chinese professor who was taken away by authorities during a live television interview with VOA nearly two weeks ago. https://t.co/zCWay8P2XY pic.twitter.com/4Sjb2Bo7jE

Police cut 84-yo prof's live interview to VoA last week on press freedom, so VoA go to his house this week…and get detained https://t.co/dH2UiJ2Hwg tough guy: wait for the shoutout to VOA BBC RFA through a grate in his door while state security outside is begging him to stop…

Zhang later reports for VOA that both journalists were released early Tuesday morning:

Police who were in the apartment building attempted to interrupt the interview and then separately detained both reporters. The VOA reporters said they were taken in separate vehicles to undisclosed locations on the university campus by men who identified themselves as contract security guards. They were freed before dawn Tuesday unharmed.

“I was just released from the hands of secret police in Jinan, with all my cell phones destroyed by them,” Feng wrote in an email to his editor. “They separated Allen from me during these hours.”

Feng later clarified that the phones are structurally intact, however they are currently inoperable.

After spending hours in a car with two men, Ai was driven to the outskirts of Jinan and released early Tuesday. He said that the men scanned and downloaded all of his electronic devices before letting him go. [Source]

On August 3, Sun, an 84-year-old retired economics and physics professor who has spoken out against government policies in the past, had been conducting a live interview with VOA from his home when police entered his house and forced him off the air. As police took him away, he was recorded saying, “I am entitled to freedom of speech.” VOA was then unable to contact him for several days and his whereabouts were unknown. Emma Graham-Harrison reported at the time for The Guardian:

The octogenarian, a retired physics and economics professor, lives in the eastern city of Jinan. He has been a rights activist and thorn in the government’s side for decades, most recently penning an open letter criticising President Xi Jinping.

Xi has fostered a cult of personality and this year set himself up to remain in power indefinitely after scrapping presidential term limits.

Sun was speaking by telephone to a Chinese language programme on Voice of America television, detailing his concerns about government investment in Africa, when the group of security officials apparently broke into his apartment.

During the interview posted by Voice of America, Sun breaks away from the discussion to say: “Here they come again, the police are here to interrupt again,” adding that between six and eight people had entered his home. [Source]

Chinese police broke into the home of Wenguang Sun, a retired professor who is critical of China's human rights record as he was expressing his opinions on a Voice of America (VOA) Mandarin TV show. https://t.co/3TNNgfT3n8 pic.twitter.com/S1J65p4TvY

Sun had been an initial signatory of Charter 08, the document calling for human rights and political reform in China, and had been publicly critical of government policies including its treatment of the Dalai Lama and of legal activist Chen Guangcheng. In 2009, Sun was beaten by police at a cemetery to pay his respects to Zhao Ziyang, the former General Secretary of the Communist Party who was placed under house arrest in 1989 after expressing support for student protesters. In the recent VOA interview, Sun had been criticizing Chinese involvement in Africa. Sun is one of many dissidents who have been repeatedly denied a Chinese passport.

#China Professor Sun Wenguang has a spine of steel–from commemorating #Tiananmen to signing Charter '08. An inspiration to many. A Chinese Activist Was Challenging Xi on Live TV. The Police Came to Stop Him. https://t.co/exbXqB2QMX @hrw @hrw_chinese

Sun’s critique of Xi’s policies comes as the president is reportedly facing rare domestic rebuke from Party insiders and members of the intellectual class.