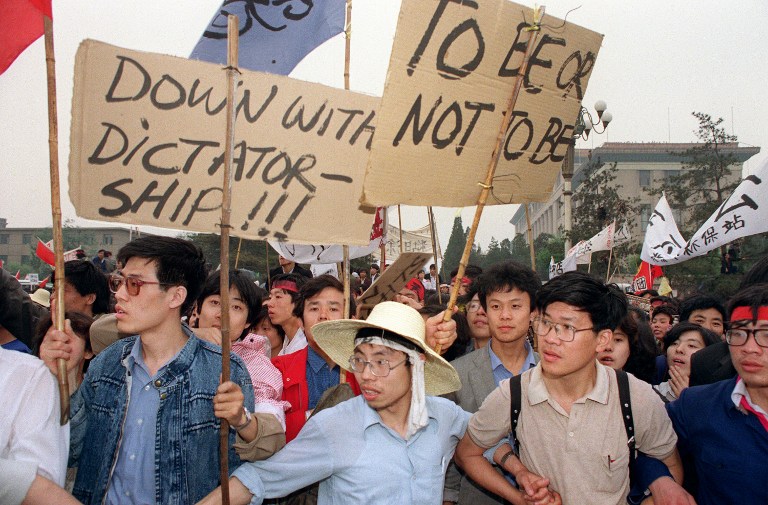 As hundreds of thousands of people demonstrated in Beijing and Shanghai for the ouster of Prime Minister Li Peng, China’s top leaders met in secret in the capital on Tuesday and appeared to make significant progress in breaking the political deadlock.

Early this morning, there were signs that Zhao Ziyang, the Communist Party leader, who was stripped of his powers late last week after he urged a moderate line toward students demonstrating for democracy, might be making a comeback.

There were also hints in official news reports that Mr. Li might be in political trouble, and military troops began to withdraw from some of their positions in the capital.

The most striking sign of a change in the power struggle came early this morning when news organizations for the first time in several days referred to Mr. Zhao and identified him as still being the General Secretary of the Communist Party. [Source]

A Hong Kong radio station reported that the ruling Communist Party Politburo met Tuesday and decided that Li should lose both his position as premier and his place on the five-member Standing Committee of the Politburo. The report could not be immediately confirmed, but there was strong evidence that Li cannot remain in power.

Communist Party General Secretary Zhao Ziyang, who favors rapid economic and political liberalization, appeared best positioned to emerge as China’s No. 1 leader. But someone else might come out on top when the current crisis is resolved.

“Truth Triumphs Over Power,” declared a banner hanging on the side of the Chinese Academy of Social Sciences building along Tuesday’s parade route. At the head of the march were intellectuals from the influential think tank, which is controlled by the Communist Party but also is a center of reformist sentiment. Some described Li’s action last week in declaring martial law as an attempt at a military coup. [Source]

Also from another article in the same day’s New York Times:

Not many Chinese follow Italian politics, so perhaps it was a bit surprising for People’s Daily to carry a small front-page article Sunday on the resignation of the Italian Government.

But in China, where subtlety is a way of journalism as of life, the message was obvious: China’s Government should think about resigning as well. Such hints are still as much a part of Chinese newspapers as ink and paper, but the last few weeks has seen a minor revolution in what newspapers can publish.

As a result, the hints are getting ever bolder, and sometimes newspapers even make their point outright. In a dramatic contrast to the press coverage before the student demonstrations began more than five weeks ago, China’s news organizations can now cover events that the Government would perhaps rather hush up.

Some say a semi-independent press may be the democracy movement’s greatest achievement and a significant spur to further liberalization. [Source]

Also, from the same paper, “Chinese take Umbrage At Attack on Mao Portrait.”