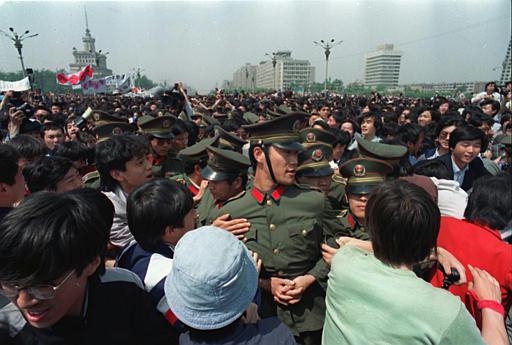 Huge throngs, possibly amounting to more than one million Chinese, took to the streets today to defy martial law and block troops from reaching the center of the capital, effectively delaying or preventing the planned crackdown on China’s democracy movement.

Troops approaching Beijing on at least five major roads were halted or turned back by the largest crowds to have gathered so far in a month of almost continuous protests. Students and ordinary citizens erected roadblocks or lay in the path of army trucks, while others let the air out of their tires.

Reports from around the country indicated growing support for the democracy movement. The city of Xian was reportedly brought to a standstill by 300,000 protesters, and rallies were reported in Shanghai, Canton and at least half a dozen other cities, and even small villages.

A few clashes were reported, but the confrontations seemed to be mostly peaceful. More troops were reported to be making their way toward Beijing, however, and it was not clear that the people could continue to keep the soldiers out. [Source]

Other articles from the same edition:
– “People’s Army, Faced by the People, May Be Opening a New Chapter”
– “In Beijing Protests, Changes By Deng Return to Vex Him”
– “Armed Only With Optimism, China’s People Rise Again”
– “Facing the People, the Soldiers Fall Back”