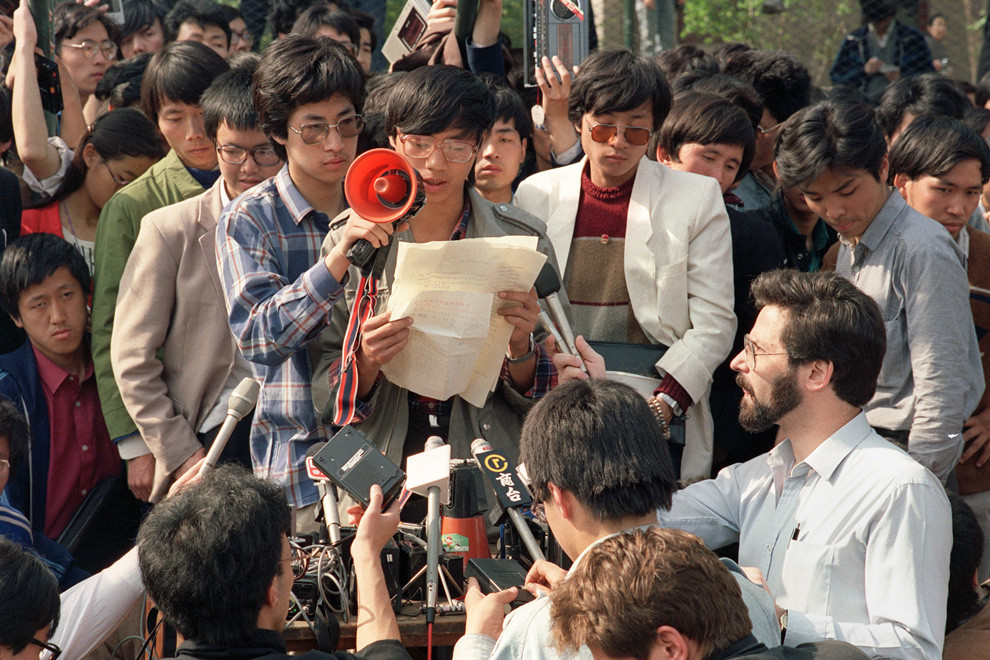 Students from several Chinese cities gathered today at Beijing University to discuss plans to expand their pro-democracy movement and to form links with schools throughout the nation.

Although there have been demonstrations in other cities, none has come close to the scale of the rally in Beijing on Thursday, when 150,000 protesters marched through the streets with spectators cheering them on.

While some people studying in Beijing took advantage of the May Day holiday to travel to other cities to spread the gospel of democracy, students from elsewhere have trickled into the capital to compare notes.

There is talk of a major rally in the capital on Thursday to commemorate the 70th anniversary of Chinese nationalist demonstrations. [Source]

Another article from the May 2, 1989 New York Times looks at the visit to Beijing by a Taiwan official:

While the Finance Minister, Shirley Kuo, has emphasized that she is here only to attend the annual meeting of the Asian Development Bank and that she will avoid political contacts with mainland officials, her presence behind what are technically enemy lines is the clearest sign so far of the easing of tensions across the Taiwan Strait.

[…] Miss Kuo will sense the relaxed atmosphere when she visits Tiananmen Square in the center of the city. A gigantic portrait of Sun Yat-sen, who is honored by both sides, has been put up in the center of the square for the May Day celebration, but the traditional portraits of Stalin, Lenin, Marx and Engels were left off this year.

”This does not mean any change of political attitude toward Marxism,” the official New China News Agency said today. It said that officials had decided that only national heroes would be honored, and noted that a portrait of Mao Zedong always hangs in a place of honor facing Tiananmen Square.

In a news conference late this afternoon, Miss Kuo announced that the Taiwan delegation would attend the opening ceremony of the development bank meeting. Miss Kuo had been expected to stay away, partly to avoid contact with President Yang Shangkun of China, who will apparently attend the opening session.

The opening session may be particularly interesting this year because it has long been scheduled to take place May 4 in the Great Hall of the People, facing Tiananmen Square. That date is also the 70th anniversary of famous Chinese nationalist demonstrations that began in Tiananmen Square, and this year students from throughout the capital are talking about a major rally for democracy in the square to mark the anniversary. [Source]