30 Years Ago: Troops Sent to Beijing 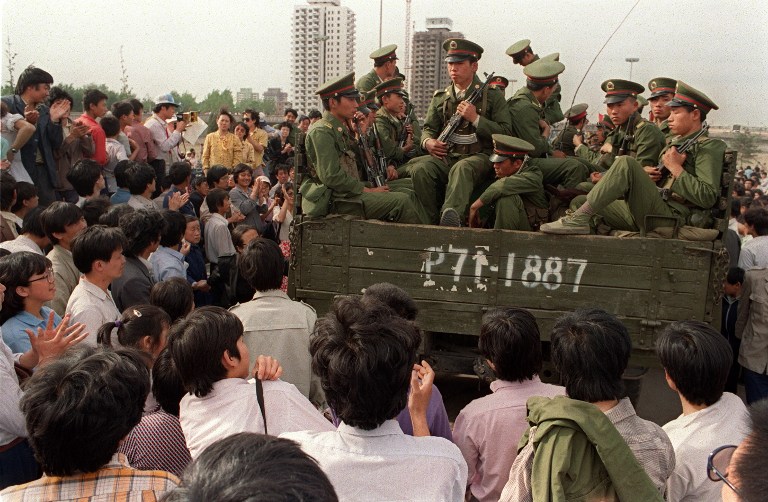 The Government called troops into the capital this morning and imposed martial law in parts of the city to crack down on China’s growing democracy movement. But tens of thousands of people rushed out of their homes to block troops from reaching student demonstrators in the central square.

”We must adopt firm and resolute measures to end the turmoil swiftly,” Prime Minister Li Peng said in a speech broadcast shortly after midnight. ”If we fail to put an end to such chaos immediately and let it go unchecked, it will very likely lead to a situation which none of us want to see.”

Chinese with access to information at the highest level said the Communist Party leader, Zhao Ziyang, had been stripped of all power but retained his title of General Secretary of the party. [Source]

From the transcript of Li Peng’s speech by Beijing Television:

[Li Peng] Comrades, in accordance with a decision made by the Standing Committee of the CPC Central Committee, the party Central Committee and the State Council have convened a meeting here of cadres from party, government, and army organs at the central and Beijing municipal levels, calling on everyone to mobilize in this emergency and to adopt resolute and effective measures to curb turmoil in a clear-cut manner, to restore normal order in society, and to maintain stability and unity in order to ensure the triumphant implementation of our reform and open policy and the program of socialist modernization [applause].

The briefing by Comrade Li Ximing, secretary of the Beijing Municipal Party Committee, a little while ago indicated that the current situation in the capital is quite grim. The anarchic state is going from bad to worse. Law and discipline have been undermined. Prior to the beginning of May, the situation had begun to cool down as a result of great efforts. However, the situation has become more turbulent since the beginning of May. More and more students and other people have been involved in demonstrations. Many institutions of higher learning have come to a standstill. Traffic jams have taken place everywhere. The party and government leading organs have been affected, and public security has been rapidly deteriorating. All this has seriously disturbed and undermined the normal order of production, work, study, and everyday life of the people in the whole municipality. Some activities on the agenda for state affairs of the Sino-Soviet summit that attracted worldwide attention had to be canceled, greatly damaging China’s international image and prestige.

The activities of some of the students on hunger strike at Tiananmen Square have not yet been stopped completely. Their health is seriously deteriorating and some of their lives are still in imminent danger. In fact, a handful of persons are using the hunger strikers as hostages to coerce and force the party and the government to yield to their political demands. In this regard, they have not one iota of humanity [applause].

[…] At present, it has become more and more clear that the very, very few people who attempt to create turmoil want to achieve, under the conditions of turmoil, precisely their political goals which they could not achieve through normal democratic and legal channels; to negate the CPC leadership and to negate the socialist system. They openly promoted the slogan of negating the opposition to bourgeois liberalization. Their goal is to gain absolute freedom to unscrupulously oppose the four cardinal principles. They spread many rumors, attacking, slandering, and abusing principal leaders of the party and state. At present, the spearhead has been focused on Comrade Deng Xiaoping, who has made tremendous contributions to our cause of reform and opening to the outside world. Their goal is precisely to organizationally subvert the CPC leadership, overthrow the people’s government elected by the People’s Congress in accordance with the law, and totally negate the people’s democratic dictatorship. They stir up trouble everywhere, establish secret ties, instigate the creation of all kinds of illegal organizations, and force the party, the people, and the government to recognize them. In doing so, they are attempting to lay a foundation and make a breakthrough for the establishment of opposition factions and opposition parties. If they should succeed, the reform and opening to the outside world, democracy and legality, and socialist modernization would all come to nothing, and China would suffer a historical retrogression. A very promising China with a very bright future would become a hopeless China without a future.

One important reason for us to take a clear-cut stand in opposing the turmoil and exposing the political conspiracy of a handful of people is to distinguish the masses of young students from the handful of people who incited the turmoil. For almost a month, we adopted an extremely tolerant and restrained attitude in handling the student unrest. No government in the world would be so tolerant. The reason that we were so tolerant was out of our loving care for the masses of youths and students. We regard them as our own children and the future of China. We do not want to hurt good people, particularly not the young students. However, the handful of behind-the-scenes people, who were plotting and inciting the turmoil, miscalculated and took the tolerance as weakness on the part of the party and government. They continued to cook up stories to confuse and poison the masses, in an attempt to worsen the situation. This has caused the situation in the capital and many localities across the country to become increasingly acute. Under such circumstances, the CPC, as a ruling party and a government responsible to the people, is forced to take resolute and decisive measures to put an end to the turmoil [applause]. [Source]

From another article in the New York Times the same day:

As American viewers watched live television coverage from China last night, Chinese officials ordered the networks to cease transmitting pictures and commentary from a portable station set up in Beijing.

The officials contended that the news restrictions were legitimate because the American networks were in China to cover the visit of Mikhail S. Gorbachev, the Soviet leader, and that visit was over. But the move appeared to be part of a general that came with the Government’s crackdown on the student protests in Beijing. [Source]