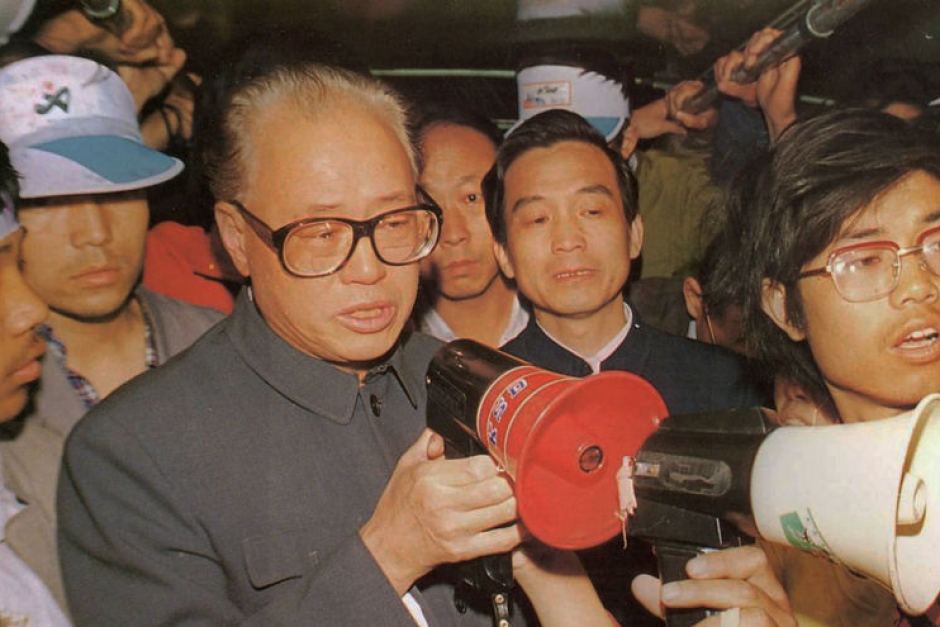 In the pre-dawn hours of May 19th, 1989, then General Secretary of the Chinese Communist Party, Zhao Ziyang, went to Tiananmen Square to talk to the protesting students. Watch a video of his speech (scroll down for full text transcript):

See several CBS News Special Reports from May 19, 1989 in which government officials order CBS journalists to cease satellite transmission of their broadcasts:

In another gesture of conciliation, Mr. Li and the Communist Party leader, Zhao Ziyang, went to Tiananmen Square in central Beijing before dawn today to visit some of the 3,000 hunger strikers whose protest has galvanized the nation into mass demonstrations of support. ‘Things Are Complicated’

”We’ve come too late,” Mr. Zhao told the students, according to the official New China News Agency. ”You have good intentions. You want our country to become better. The problems you have raised will eventually be resolved. But things are complicated, and there must be a process to resolve these problems.”

Mr. Zhao added that ”the whole of Beijing” was discussing the hunger strike, and he called on the students to end the fast.

As the demonstrations continued in the capital, scores of thousands of people took to the streets of Shanghai on Thursday to demand more democracy and show support for the hunger strikers. The demonstration coincided with a visit to the city by Mikhail S. Gorbachev, the Soviet leader, who ended his four-day trip to China after concluding agreements for expanded party and government contacts and a general reduction of military tensions in Asia. Leadership Is Split The Chinese leadership has been split about how to handle the challenge from the students. Mr. Zhao’s comments appeared to be an attempt to win support from demonstrators and to put blame on other leaders for adopting a harder line and thereby complicating the situation. [Source]

From another New York Times article the same day:

His political views already have estranged Mr. Xie from his father, a private entrepreneur in Jilin Province in the northeast, and he lied to his grandfather and older brother about his intentions to protest. His mother, sensing her son’s radical spirit, has written letters pleading with him to stay out of the student demonstrations.

”I just thought about my mom,” Mr. Xie said after a pause, recalling the moments just before he fainted as he lay in the hunger strikers’ area of Tiananmen Square, the political center of the nation. ”I worried that my mother would feel anxiety for me.”

Workers, intellectuals, teachers and students in cities all over China are protesting the Government’s antagonistic response to the hunger strikers. Fast Is Focus of Movement

Public support encourages the hunger strikers, who can hardly envision the flood of people who have poured into the streets on their behalf, but what carries them through their bouts of hunger, dizziness and fatigue seems to be an intensely personal conviction that the ideal of democracy is worth suffering for. [Source]

Below is an AP wire report from May 19. For additional relevant AP reports from that day, see here. 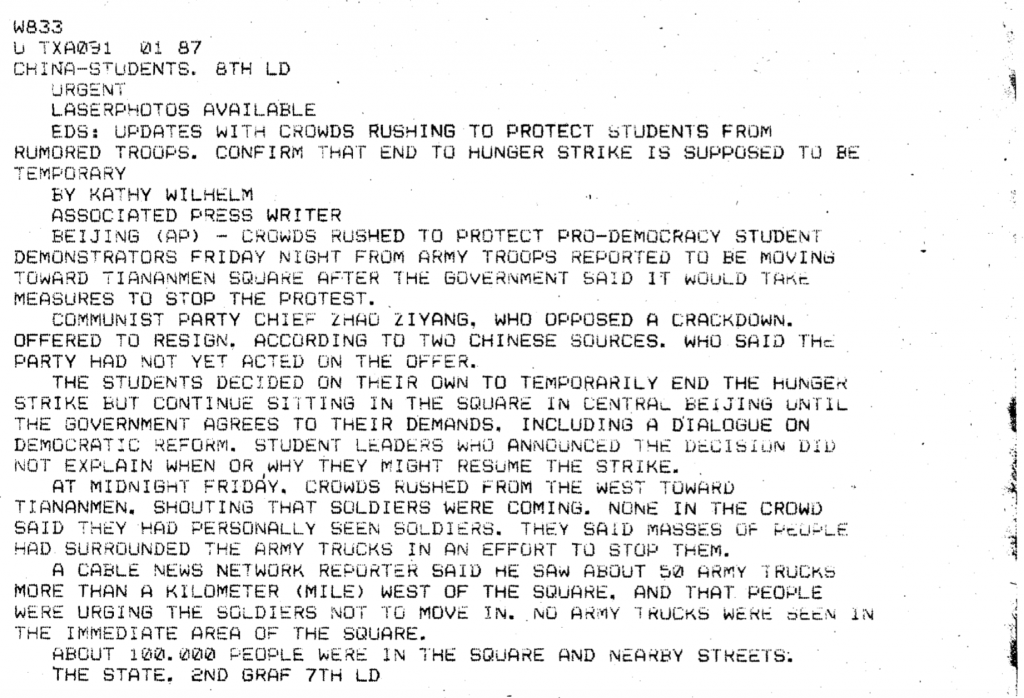 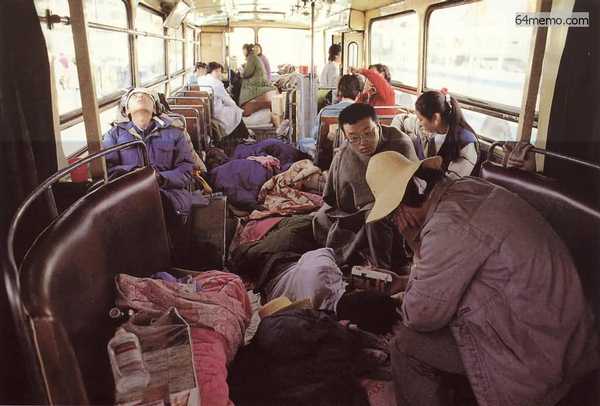 Hunger striking students rest inside a bus on Tiananmen Square. Photo via 64memo.org

A translated transcript of Zhao Ziyang’s speech on Tiananmen Square is below, courtesy of Asia! Magazine:

“Students, we came too late. Sorry, students. Whatever you say and criticise about us is deserved. My purpose here now is not to ask for your forgiveness. I want to say that now, your bodies are very weak. You have been on a hunger strike for six days, and it’s now the seventh day. You cannot go one like this. Starving for such a long time will cause irreparable problems for your bodies, and is dangerous for your health. Now what is most important is to end this hunger strike. I know, you are doing this in the hope that the Party and the government will give a most satisfactory answer for what you are asking for. I feel, our channel for dialogue is open, and some problems need to be resolved through a process. You cannot continue to – after seven days of hunger strike– insist on stopping only when you have a satisfactory answer.

You are still young and have much time ahead of you. You should live healthily to see the day that the Four Modernisations (as proposed by China’s first premier Zhou Enlai in 1975 in the areas of agriculture, technology, industry and defence) of China are realised. You are not like us, we are already old, and do not matter. It was not easy for the country and your parents to nurture you to reach university. Now in your late teens and early twenties, you are sacrificing your lives! Students, can you think rationally for a moment? Now the situation is very dire as you all know, the Party and nation are very anxious, the whole society is worried. Besides Beijing is the capital, and each day the situation is worsening; this cannot go on. You mean well, and have the interests of our country at heart, but if this goes on, it will go out of control and will have various adverse effects.

All in all, this is what I have in mind. If you stop the hunger strike, the government will not close the door on dialogue, definitely not! What you have proposed, we can continue to discuss. It is slow, but some issues are being broached. I just wanted to visit you today and at the same time, tell you how we feel, and hope that you will calmly think about this. Under irrational circumstances, it is hard to think clearly on this. All the vigour that you have as young people, we understand as we too were young once, we too protesteed and we too laid on the tracks without considering the consequences.

Finally I ask again sincerely that you calmly think about what happens from now on. A lot of things can be resolved. I hope that you will end the hunger strike soon and I thank you.”

Read more about Zhao Ziyang, his role in the events of 1989, and his assessment of the government’s actions, in the book Prisoner of the State.