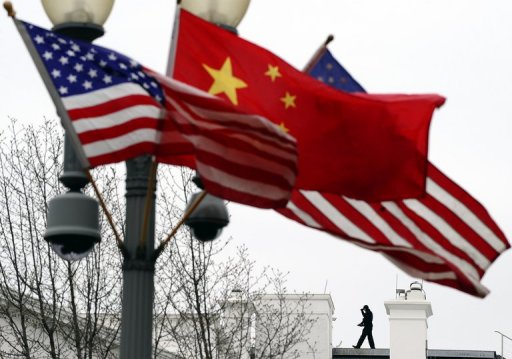 As the China-U.S. trade spate escalates after Washington increased tariffs on Chinese imports from 10% to 25% and Beijing vowed to retaliate, The New York Times’ Javier C. Hernández reports on a rise of nationalism and anti-American sentiment on Chinese social media:

Nationalism has surged in China in recent days as the government seeks to portray China as a victim of American bullying. With trade talks stalled, Chinese commentators have taken aim at President Trump and vowed to resist American demands. Here’s a look at what is being said on social media and state news outlets.

The sign [pictured in article] hangs outside a restaurant in China, informing the public that Americans must pay an extra 25 percent fee to dine. “If there is any inconvenience,” the sign says, “please consult the U.S. Embassy!”

A photo of the sign was one of many anti-American memes circulating on Chinese sites this week. The government has allowed the outpouring of criticism in part because it directs attention away from China’s handling of the trade talks, experts said.

[…] While the state-run news media in China have largely avoided attacking Mr. Trump by name, internet users have been less generous. They have circulated cartoons like one titled “Giant Baby Trump” to highlight what they describe as the president’s mercurial tendencies.

“Trump’s behavior will only hurt the innocent, damaging the global economy and causing destruction to both sides,” a user wrote on Weibo, a Chinese social media site similar to Twitter. [Source]

Anger with Washington began to flow on Chinese social media before the tariffs were official, following President Trump’s warning tweet the weekend prior. At Foreign Policy, Lauren Teixeira notes that amid the social media outrage, Chinese state media remained far more measured. Teixeira continues to explain the strategy behind Beijing’s decision not to stoke the smoldering nationalism into an all-out blaze with its propaganda machine–yet, at least:

[…] Before the 11th round of talks commenced, the Chinese government was coming in for criticism from online nationalists hoping China would retaliate with a full-on escalation of the trade war. A critical editorial from the economist Deng Yuwen compared Liu to Li Hongzhang, the late Qing dynasty official who ceded territory to Japan under the Treaty of Shimonoseki. Chinese official media, however, basically ignored the swirling nationalistic rhetoric in the lead-up to the talks, adopting an uncharacteristically neutral tone toward the prospect of a deal.

Now that the trade war must continue, China has mildly ramped up the nationalism—although not to anywhere near the level of the anti-Japanese frenzy, or even the kind of anti-United States protests that hit after the Belgrade bombing in 1999 that killed three Chinese journalists. Rather than full-on battle rhetoric, the language being used around the trade war is “fighting while negotiating” (yi bian da, yi bian tan), suggesting that China is still hoping for a resolution sometime soon.

This undoubtedly has to do with the very real effects the trade war is having. After Trump tweeted about the tariff increase earlier this month, the Chinese stock market took its biggest single-day plunge in three years, causing many to joke that the Chinese economy is “too weak to withstand a tweet” (a play on a well-known Chinese idiom, ruo bu jin feng or “too weak to withstand a gust of wind”). Since the announcement, Hu Xijin has devoted much space on his Weibo to placating disgruntled Chinese stockholders, expressing his sympathy and understanding, and reassuring them of their long-term economic prospects.

Yet ire in China is still limited. With the tariffs mostly enacted on the U.S. side, few Chinese other than stockholders have felt the effects yet. Nationalistic sentiment seems mostly limited to mildly irked memes about Trump’s irresponsible behavior during the negotiations. […] [Source]

At the AP, Yanan Wang and Sam McNeil provide some examples of the measured state media reaction to the newest round of tariffs, and quote experts on Beijing’s efforts to carefully maintain a balance between nationalistic fervor and public “stability”:

President Xi Jinping, the ruling party’s most powerful leader in decades, has made China’s foreign policy more assertive while nurturing the growth of a red-blooded but tightly controlled nationalism.

[…] David Bandurski, a co-director of the University of Hong Kong’s China Media Project, said the country’s current aim is to promote stability rather than foment patriotic fervor.

“China is keen to project calm,” he said. “The last thing it needs or wants is to whip up popular anger, which can turn quickly,” sometimes in ways that the party can neither predict nor control.

A report from the South China Morning Post last Friday–the day that Trump’s tariff increases went into effect–noted that Chinese media professionals were instructed to follow the official line on the trade dispute in an effort to “prevent a backlash of public opinion.” Last week, CDT translated two leaked propaganda directives that appear to be part of the state effort to maintain media unanimity and keep public zeal in check.

At the Los Angeles Times, Alice Su analyzes the source of the nationalism apparent in the online anger towards Washington: the “century of humiliation” by Western and Japanese colonialists that China endured before the establishment of the PRC, and the long-running state campaign to ensure that this remains stark in public memory:

As the U.S.-China trade war escalates, many Chinese are recalling a state-sponsored narrative of China’s “century of humiliation,” when a weakening imperial China fell prey to Western and Japanese colonialism during the 19th and 20th centuries.

[…] Modern Chinese history taught in schools begins with the Opium Wars, when Britain smuggled opium into China to make up for its trade deficit.

[…] “We used to be so behind. Everything was destroyed by those invaders,” Li [a visitor to Beijng’s Old Summer Palace] said. Visiting the ruins made her thankful for how strong China had since become, she said.

“I think China isn’t scared of anything anymore. Whatever happens with the trade war, I don’t think we’ll lose,” she said. […] [Source]

#China state TV is playing up patriotism, posting a clip from the evening news last night which has been viewed on social media 3.3bln times. The anchor says, “After 5,000 years of trials and tribulations, what kind of battle have the Chinese people not been through?” https://t.co/wAJealMPiA

“Please— someone teach me what the impact of the trade war will be on ordinary people like us. Thanks.” -comments for this request censored on #China social media today. pic.twitter.com/GSEVCo0wCO