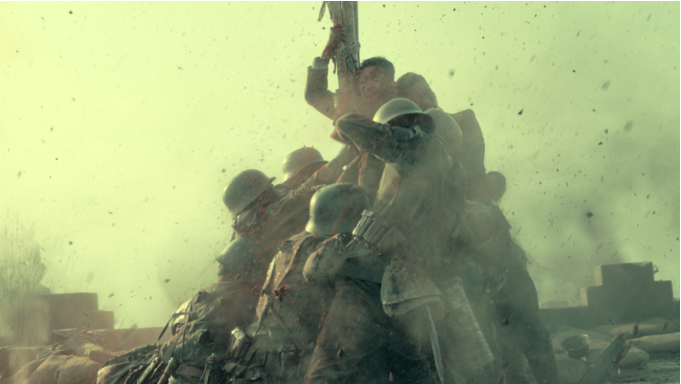 It has been confirmed that the war film “The Eight Hundred” will no longer be released in China on July 5 as originally planned. This cancellation comes after the $80M Huayi Brothers war film was abruptly pulled from the Shanghai Film Festival earlier this month after suspected pressure from government censors. From The Hollywood Reporters’ Patrick Brzeski:

After a shocking late-hour withdrawal as the Shanghai International Film Festival’s opening movie, the big-budget Chinese war epic The Eight Hundred has called off its nationwide theatrical release in China next week.

The film’s producer, leading Chinese studio Huayi Brothers Media, put out a simple declarative statement on Tuesday, saying, “After consultation between the production team and other entities, The Eight Hundred will cancel its original July 5 premiere and temporarily vacate the summer release date window. The new release date will be announced at a later time.”

The statement offered no explanation for the reasons behind the change, but the ambitious movie’s chances of hitting Chinese screens anytime soon had been in serious doubt ever since it was yanked on the eve of the Shanghai festi a little over a week ago. [Source]

Huayi Brothers’ stock fell by more than eight percent after the release was postponed. The much anticipated summer blockbuster–the first Chinese feature shot entirely on Imax cameras–recounts the story of Chinese soldiers battling Japanese invaders in 1937, with a focus on the role of the Chinese Nationalists during a key battle in Shanghai. Industry insiders believe that it is this portrayal of Communist Party rivals as the heroes of the Sino-Japanese War that triggered censorship from top levels of government, who are particularly wary of politically sensitive storylines this year given the upcoming 70th anniversary of the founding of the People’s Republic in October. Financial Times’ Tom Hancock reports:

[…T]wo people briefed on the matter say Beijing objected to the film’s heroic portrayal of the Kuomintang (KMT) — the nationalists who lost a civil war with the Communist party.

The 800 tells a tale about Chinese soldiers and volunteers battling Japanese invaders in Shanghai in 1937 and the plot centres on the KMT, who fought the bulk of China’s war against Japan.

The film would have been seen as a particular risk to the Communist party this year because in October it is celebrating the 70th anniversary of its victory in the civil war, in which KMT forces were vanquished to Taiwan. Censors have been out in force across China’s media this year as the country navigates a number of sensitive anniversaries including the 30th anniversary of the Tiananmen Square massacres.

[…] “Military topics have become more sensitive,” said Zhang Xianmin, an independent film producer, adding that larger-budget films were receiving greater scrutiny. “They are grabbing the big, and letting go of the small.”

[…] In addition to military topics, government officials are worried by content that could be perceived as excessively patriotic, which could unnerve foreign audiences and damage China’s reputation abroad, according to three industry executives. A sequel, Wolf Warrior 3, was announced in 2017 but cancelled by officials according to a person with direct knowledge of the matter. “The government doesn’t want films which make China appear aggressive,” the person said. [Source]

The New York Times’ Steven Lee Myers writes that the first indication of trouble came when a group of participants at the China Red Culture Research Association criticized The Eight Hundred and complained about its KMT focus.

A nongovernmental group called the China Red Culture Research Association held a conference in Beijing on June 9 to discuss the state of Chinese films and singled out “The Eight Hundred” for blistering criticism.

According to a report published on another social media platform, WeChat, the participants complained that the film excessively glorified the Republic of China, then led by Chiang Kai-shek and his Kuomintang.

The participants included researchers, critics and a former propaganda official with the general staff of the People’s Liberation Army. The report, posted by a Communist training center in Shaanxi Province, cited complaints about sequences showing the Republic of China’s flag, and said that the film used “historical debris to cover up the actual truth of history.” […]

In fact, the battalion’s actions have been lauded previously by the Communist government, which in 2015 turned the warehouse building, located on the Suzhou River in Shanghai’s center, into a memorial museum. The state television network, CCTV, lionized the battle when the museum opened.

Under Mr. Xi, it seems, political winds have since shifted. [Source]

Deadline’s Nancy Tartaglione explains how in China it only takes one top official to take down a film no matter what stage it is in:

Industry people I’ve spoken with wonder why and how films get made if they are ultimately too risky for the government to approve in the final stages. I’m told that even if OKs are given when a production begins, it takes only one high-ranking official to stop plans in their tracks. Says Rosen, “Even when a script is approved and the film is completed, that is not the end of the process. As we’ve seen on numerous occasions, all it takes is for one senior official to derail the process, even when the costs are high.”

In the case of The Eight Hundred, Rosen adds, “China is trying to do many things at the same time with its film industry, but they are often contradictory, particularly when politics enters the picture. Major goals, a number of which would have been met by this film, can be sacrificed quite arbitrarily in a country ruled by individuals, not by law.”

He sounds an optimistic note, of sorts, “Ironically, as a result of this fiasco, it’s at least possible that there will be enough pushback for censorship in other film genres to ease a bit, to restore some morale in the industry since they still have goals to meet.”

That includes having local releases get at least 50%+ share each year and to surpass North America as the world’s biggest market by 2020 or 2021. [Source]

“The Eight Hundred” is the latest Chinese film to fall to cancellations, withdrawals, and forced modifications under tightening rules. At Variety, Henry Chu and Rebecca Davis name other casualties of the current censorship crackdown:

[…] China is undergoing a period of strong social and cultural tightening, and Chinese film censors have been especially active lately in ordering changes to films or yanking them from festivals and the domestic release schedule.

Besides “The Eight Hundred’s” announcement, an upcoming film whose original Chinese title translates to “Mighty Wishes” announced Tuesday that it would change its title “due to market demands” to “Tiny Little Wishes.” The slogan on the film’s poster was adjusted from “Having your wishes fulfilled” to “Tiny wishes can also be mighty.” And a TV adaptation of a work by Guo Jingming said it was being renamed “The Flow of Beautiful Times” instead of “A Flowing River of Sadness.”

And on Monday, the Chinese youth drama “Better Days” said it would no longer hit Chinese theaters on Thursday as planned. “Better Days” had already been withdrawn at the last minute from the Berlin Film Festival in February, a fate that also befell Zhang Yimou’s “One Second.”

“The whole world is moving forward, while Chinese cinema is heading backward,” lamented one of the top comments on “The Eight Hundred’s” Weibo site, on the announcement of the canceled release. [Source]

Propaganda films are now the ones set to dominate theaters this summer.