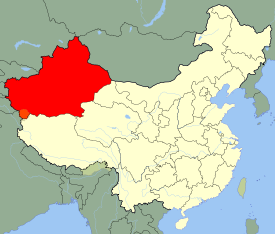 Reuters’ David Stanway reports on a new white paper titled “Historical Matters Concerning Xinjiang,” published by China’s State Council Information Office, which makes the case that the region is an “inseparable” part of China. The Xinjiang region, home to a majority population of ethnic Uyghurs, has been the site of a mass detention program where an estimated 1.5 million Uyghurs are being held in a series of internment camps. While authorities claim that these camps are simply “vocational training” facilities, there has been evidence of forced labor, political indoctrination, abuse, and deaths inside the camps.

[…] The government said in a white paper published by the State Council Information Office it was wrong to suggest members of Xinjiang’s minority Uighur Muslim community were descended from Turks, noting they had become the political tool of pan-Turkic and pan-Islamic groups.

The paper said “hostile forces in and outside China, especially separatists, religious extremists and terrorists, have tried to split China and break it apart by distorting history and facts”.

[…] The government white paper said Xinjiang has been a part of China since the Han dynasty in the third century and its people and ethnic cultures were formed by a long process of migration and integration. [Source]

“Like any piece of propaganda, it’s filled with partial truths,” he said.

[…] According to China’s white paper […] the region has “long been an inseparable part of Chinese territory” and has never been East Turkestan — a term it claims is used only by separatists in their “clamour for independence”.

Mr Leibold said this claim was “frankly not true”.

[…] “It’s foolish to speak about the existence of a unified Chinese nation 5,000 or even 3,000 years ago to include what is today Xinjiang and the Uyghur people,” Mr Leibold said, adding that claims about religious freedom in Xinjiang were “laughable”. [Source]

CNN’s Ben Westcott and Yong Xiong report on the paper’s attempt to present the prominence of Islam among Xinjiang’s ethnic Uyghurs as a forced conversion by foreign forces, and its parallel claims of allowing full religious freedom in the region:

The 6,800-word document, released in full by state news agency Xinhua, said that Xinjiang “respects citizens’ freedom to believe in, or not to believe in, any religion.”

[…] “The Uyghur conversion to Islam was not a voluntary choice made by the common people, but a result of religious wars and imposition by the ruling class,” the report said.

“Islam is neither an indigenous nor the sole belief system of the Uyghur people,” it added.

[…] The predominately Muslim Uyghurs, who are ethnically distinct from the country’s majority ethnic group, the Han Chinese, form the majority in Xinjiang, where they account for just under half of the total population.

The white paper says there are now 24,800 venues for religious activities in Xinjiang, including 24,400 mosques and 400 temples, churches and other places of prayer. [Source]

Earlier this month, 22 mostly Western nations signed a joint statement to Beijing condemning the mass detention in Xinjiang at a session of the U.N. Human Rights Council, the first concerted international effort to directly challenge China on the repressive program. Days later, Beijing replied with its own letter to the UNHRC–signed by 37 ambassadors from Asia, Africa, the Middle East, and Latin America–lauding China’s “contribution to the international human rights cause” and characterizing the campaign in Xinjiang as a needed anti-terrorism measure. A Washington Post editorial chastises the majority-Muslim countries that signed the letter and the U.S. for not being strong enough in its denouncement, while applauding the few Muslim nations that resisted Chinese pressure to sign:

The statement represents a shameful capitulation by Pakistan, Saudi Arabia, Egypt, the United Arab Emirates, Algeria and other majority-Muslim states that frequently pose as defenders of the faith — especially when it involves condemning Israel. And it offers an augur of what international affairs will look like if the Chinese regime of Xi Jinping realizes its global ambitions: a world where most states meekly submit to Beijing’s dictates and endorse its crimes.

[…] That Muslim nations would condone this record is testimony to Beijing’s ability to leverage its growing economic clout. A few of those that signed, including Pakistan and Tajikistan, are benefiting from billions of dollars in Chinese investments through the “Belt and Road” infrastructure program. Others are hoping for a share. Saudi Arabia, whose U.N. ambassador falsely claimed that the letter only addressed China’s “developmental work,” is desperate for foreign investment.

A few important Muslim countries resisted China’s lobbying and did not sign the letter, including Indonesia, Turkey and Malaysia. But none was brave enough to join in the Western letter, mild though it was. Perhaps they would show more determination if the United States was stronger in denouncing the genocide. But the Trump administration has been inconsistent, at best. On Thursday, Secretary of State Mike Pompeo, angered by what he said was China’s lobbying of governments not to attend a conference on religious freedom he hosted, called its treatment of the Uighurs the “stain of the century.” […] [Source]

China policy correspondent Cate Cadell offers several tweets on the rights records of the nations that signed in support of Beijing’s record:

Here's where they fall on Reporter's Without Borders press freedom list https://t.co/EewU0R301E pic.twitter.com/kXtkkFIqUo

(You know you're really scraping the bottom of the human rights bucket when you're plumping the numbers with North Korea, Syria and *both* Congos)

As a side note – here's how many of them are top Belt and Road debtors to China by debt-to-GDP ratio, from this month's very detailed Kiel Working Paper https://t.co/EWCNwuc0R9 pic.twitter.com/EAXJweVD3M

In summary, these are the supporters of China's Uyghur concentration camps. This is the human rights vision that China is using its influence to push to the world. When China says it doesn't impose ethical values on the countries it invests in – this is what it means.

Complete 37 here: (this list is so cursed that Amal Clooney has agreed to represent the word doc it was screenshotted from) pic.twitter.com/kVRF47v4JA