HK and the “Modern Aphasia” of Chinese Patriots 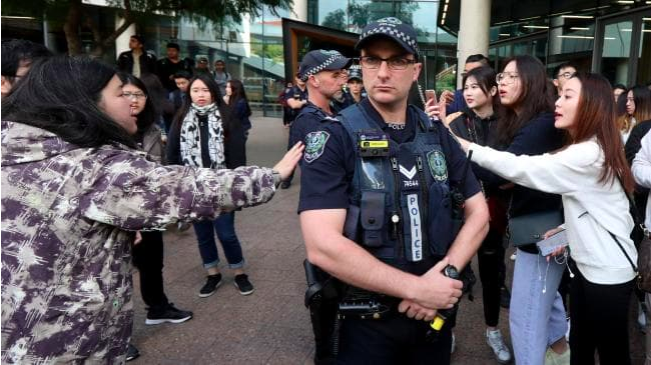 Clashes over pro-Hong Kong democracy movement rallies at university campuses across Australia and New Zealand have raised free speech concerns from lawmakers and academics in recent weeks. Tensions in Australia continue to boil as students fear more fights between pro-Hong Kong and pro-China groups. Pro-China students were filmed chanting expletives at pro-Hong Kong protesters at the University of South Australia in one of several campus altercations across the country. Ben Graham and Frank Chung at news.com.au report.

A video posted to social media shows Chinese students at a protest at the University of South Australia in Adelaide, chanting “Cao ni ma bi” or “F*** your mother’s c***” to Hong Kong protesters.

Other videos from Friday night show up to 1000 rival activists jostling as tempers flared at the demonstration in Melbourne — which began at 7pm outside the State Library in Swanston Street.

The two groups faced off and exchanged heated words before police formed a line separating the groups. Among the chaos, an ABC cameraman was shoved by a man who then appeared to attack his gear. [Source]

@fduyuyture65: Melbourne, University of South Australia, a female Hong Kong student shouted “Hong Kong is powerful, support Hong Kong!” It elicited the following response from a group of mainland international students: “fuck your mother’s cunt.” This is definitely an interchange between civility and barbarism. Shameless, despicable… If this continues, the whole world will spurn the Chinese again…repost.

CDT has translated a WeChat essay from 中产生活观察 that comments on the event, with a look at the deeper sociopolitical roots underlying the mainland students’ behavior. (Editor’s note: CNMB is the acronym for cǎonímǎbī 操你妈逼, which is a Chinese phrase that translates to “fuck your mother’s cunt.” See also CDT’s explanation of the homophonic term “grass-mud horse.” “Fishing village” refers to Hong Kong.)

The swear words CNMB might be included in the English dictionary to describe a certain situation.

Both are Chinese, the people from the fishing village are calling out political slogans, while students from the mainland are instead shouting “CNMB,” a national swear word that northerners are familiar with.

According to some accounts, several people even surrounded the students from the fishing village, urging them to “call [China] daddy.”

One can imagine that they must have been very happy and proud when they did it.

This makes one feel awkward. After all, these are children who dreamed of studying abroad. They must have had a high school education at the very least. How can they behave like this?

On a more serious thought, it’s hard not to also feel sad for these children: during these instances of political action, they are unable to express themselves. At these crucial moments, they almost instinctively resort to cussing as their prominent weapon.

These are cuss words that the wild children of the north all know. When I was young, the biggest victory was to insult another child with the words “I am your father,” while knowing nothing about the meaning behind those words. The power of this phrase lies in its sexual associations. When sex becomes a taboo, the phrase can then make people uncomfortable.

With the progression of education, greater taboos have come to the fore, and that is politics. For Chinese people, this taboo completely overwhelms the sexual taboo.

In modern society, learning to express political views is compulsory for everyone. Unfortunately, although mainland education has been instilling students with political views, it does not allow these students to express themselves.

This has resulted in a form of modern aphasia. Under these circumstances, they can only recite their textbooks. Once they realize that this is ridiculous, they blurt out those words that can best express their anger from the bottom of their hearts: “CNMB…”

This problem here is not swearing, nor is it a question of civility and barbarism, but rather a marvel in the history of global politics. [Chinese]

The pro-China protesters weren’t alone in using offensive phrases at the stand-offs in Australia. See also an essay at The Sydney Morning Herald by Vicky Xiuzhong Xu, who details the trolling she has experienced from Chinese nationalists, and her earlier experience holding those nationalistic views as a relatively new international student in Melbourne.