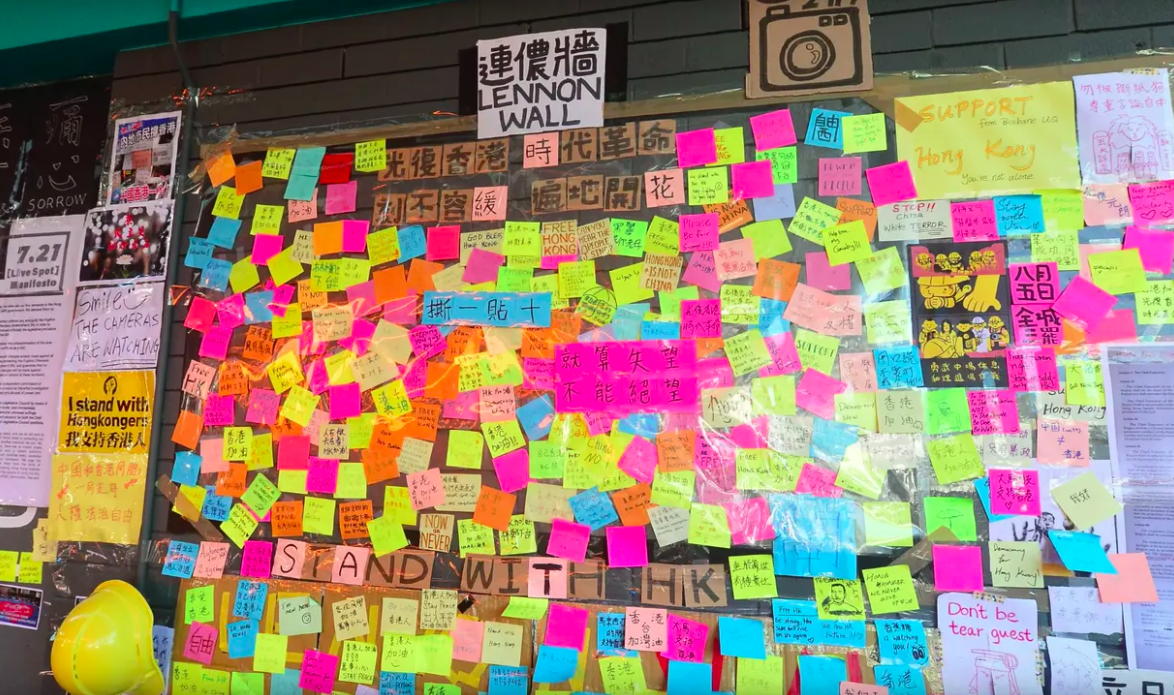 At The Washington Post, A. Odysseus Patrick and Emanuel Stoakes look at how the evolving political crisis in Hong Kong has become a major flash point on university campuses in Australia and New Zealand, both of which host growing numbers of Chinese international students. Several confrontations have erupted in recent weeks between students who support and oppose the ongoing protests in Hong Kong. (The scope of the protests has expanded from its original focus on the now-suspended extradition bill to include police brutality, protesters’ arrests, official rhetoric, and political representation.) Campus displays of solidarity with Hong Kong were subject to continuous interference, raising fears that Chinese influence is stifling free speech:

Students, academics and officials in Australia and New Zealand, two of the modern world’s older democracies, now find their natural sympathy for Hong Kong’s protesters colliding with their nations’ economic dependency on Beijing — a weakness the Chinese Communist Party isn’t hesitating to exploit.

The most visible flash point is on campus. At universities in the Australian cities of Sydney, Melbourne, Brisbane and Hobart, and in New Zealand, students who support and oppose the Chinese Community Party have spent recent days erecting, ripping down and restoring walls covered with cards and Post-it notes calling for freedom in Hong Kong.

[…] Every pro-democracy protest is countered by Beijing’s well-drilled student supporters. When some University of Sydney students proposed a protest Friday — which did not proceed — opponents shared notes on WeChat, the Chinese messaging and social media platform, about how to respond.

“The pro-Hong Kong independence demonstration on August 9 is planned by some forces of Sydney University,” one person wrote, according to an image taken by a student. “We will not use force, but will absolutely not sit idly by and do nothing. [We] will fight the separatist forces to the end using legal means. Never make a concession!!” [Source]

These developments come amid broader concerns in Australia and New Zealand over Beijing’s growing influence on local politics and academic censorship. Most recently, officials in Australia launched a probe into Confucius Institutes operating within Australian universities to assess whether these Beijing-funded centers should register as foreign agents under a new foreign influence transparency law.

As tensions flare, Lennon Walls–walls adorned with handwritten messages and Post-It notes showing solidarity with protesters that act as important platforms for free expression both within Hong Kong and elsewhere–have become a target for pro-Beijing supporters on campuses across Australia and New Zealand. The University of Queensland’s Lennon Wall was torn down by four unidentified individuals on Monday. Naaman Zhou at The Guardian reports:

Lennon walls, inspired by a wall in Prague that 1980s activists decorated with Beatles quotes, have become a popular form of protest against Hong Kong’s controversial extradition bill. The first Hong Kong Lennon wall was created during 2014’s umbrella movement. They have spread widely this year, including to Australian campuses.

At UQ, Hong Kong students created the colourful wall on Friday, with messages such as: “Stand with Hong Kong. Protect freedom of speech.”

Jack Yiu, a Hong Kong international student who had been involved in campus protests, told Guardian Australia that masked people had torn down the posters.

“We had someone see it around 11pm and it was fine,” he said. “We got reports around midnight that four guys in masks came and just tore everything apart. We have them on the footage. The CCTV got them. We are trying to figure out who did that – even whether they are students or not.”

A UQ spokeswoman said if any of the men were identified and associated with the university, it would take appropriate action. It would also increase security around the wall. [Source]

At 1 am, UQ security confronted a group of pro CCP vandals at the Lennon Wall. Third night in a row it has been targeted. This time they wore no masks, confident of their impunity. Their visas should be cancelled – Australia should not welcome those w/ open contempt for democracy pic.twitter.com/2YB1BGSN4D

My favorite part of this video is when the CCP thug has the gall to threaten to call the Chinese ambassador on UQ security. Who do these people think they are? https://t.co/2xK9poOn4e

The Lennon Wall at New Zealand’s University of Auckland has also been vandalized on multiple occasions, the latest of which occurred after a clash at rally in support of Hong Kong protesters on campus last Tuesday. From Linda Lew at South China Morning Post:

About 100 people, including opposition MP David Seymour, attended the two-hour rally at the University of Auckland. The event was organised by students opposing the now-suspended extradition bill, legislation that would allow suspects of serious crimes to be sent from Hong Kong to other jurisdictions, including mainland China.

The largely peaceful rally was briefly interrupted by an unidentified pro-Beijing supporter, who held up a placard that read: “Hong Kong independence mob”. He left after a confrontation with one of the rally-goers, which was filmed by other attendees.

“I can feel there is increasing tension,” Serena Lee, from rally organiser the We Are Hong Konger group, said in a video of the event on the group’s Facebook page. “We’re actually opposing the extradition bill. But they [mainland students] see this as an action to oppose the Chinese government.”

[…] This was the second confrontation at the university over the disturbances in Hong Kong. Last week mainland and Hong Kong students clashed over a “Lennon Wall” – a display of messages on Post-it notes that have been a feature of the protests in the city – as it was being set up on campus by Lee and fellow students. During the scuffle, Lee was allegedly pushed to the ground.

On Tuesday the Lennon Wall at the university was destroyed again, according to the rally organisers. [Source]

The fear of politics ingrained in the minds of mainland students – they want a “clean and pure academic environment“. Dare I say my degree @unimelb was mostly useless, but learning to deal with new info/facts about China on campus was an invaluable experience. Embrace it folks https://t.co/1ZFlr8WCTX

In response to the incident, the Chinese consulate in Auckland released a statement supporting the actions of the students and lauding their “spontaneous patriotism,” drawing criticism from New Zealand lawmakers and academics. From AFP:

[…] Opposition lawmaker David Seymour said the New Zealand government, which has not yet commented on the issue, should not allow a foreign mission to condone such physical confrontation.

“(Foreign Minister) Winston Peters needs to tell the Chinese ambassador to respect our law and values,” he tweeted.

“It is quite concerning to see PRC (People’s Republic of China) diplomats encouraging and praising PRC international students to intervene in a peaceful protest in New Zealand,” she told the New Zealand Herald. [Source]

The Chinese consulate in Brisbane, Australia similarly praised “spontaneous patriotism”  in a comment that appeared to support the disruptive behavior of pro-Beijing students. As officials in Australia and New Zealand confront China for interfering with free expression on campus, China has hit back by calling for “certain people in New Zealand” to “take off their tinted glasses.” Sam Sachdeva at Newsroom reports:

On Tuesday, Prime Minister Jacinda Ardern revealed officials from the Ministry of Foreign Affairs and Trade had called in Chinese government representatives to reiterate the importance of upholding and maintaining freedom of expression in New Zealand, including on university campuses.

“We guard that, that is part of who we are. And I think it is important for those that may take a different view that we are very clear on our expectations,” Ardern said.

[…] Asked about New Zealand’s actions at a daily media briefing in Beijing, Chinese foreign ministry spokeswoman Hua Chunying claimed the University of Auckland protests were led by “a very small number of people with ulterior motives” who had “peddled ‘Hong Kong independence and stirred trouble for anti-China purposes”.

[…] Hua said the Chinese consulate had “clarified the facts and stated our stern position”, while asking Chinese students in New Zealand to “appropriately express their appeal” following New Zealand’s laws and university regulations.

“It is just fulfilling its duty and this is beyond reproach. We advise certain people in New Zealand to take off their tinted glasses, discard double standards and stop condoning the anti-China separatist activities by ‘Hong Kong independence’ forces under the cloak of ‘freedom of speech’.” [Source]

Students who spoke out in support of protesters in Hong Kong have also faced harassment and intimidation, both online and from officials in China. Fergus Hunter at The Age reports that the family of an international student who attended protests at an Australian university was threatened by Chinese authorities back home.

The student took part in last month’s event to show support for pro-democracy protesters in Hong Kong and to condemn Beijing’s repression of the Uighur ethnic minority group.

“I was in the protest. When people were recording I was doing my best to hide my face or stay away from the crowd,” the student, who did not want to be identified for fear of repercussions, told The Sydney Morning Herald and The Age.

But within days of the rally the student received a call from his mother in China to say the family had been approached by “a guest”.

His mother told him the authorities had issued a warning about engaging in “anti-China rhetoric” in Brisbane and warned him not to “join any events where people are gathered together”.

“As long as you do that, we can make sure you’re safe and we’re safe,” his mother told him.

She said the family had assured officials that their son was loyal to the Communist Party. [Source]

Meanwhile, the Australian government has issued a travel alert warning Australians traveling in Hong Kong to exercise caution as protests in the city continue to escalate, The Guardian’s Christy Choi reports:

The Australian Department of Foreign Affairs and Trade (Dfat) said: “There is a risk of violent confrontation between protesters and police, or criminally linked individuals, particularly at unauthorised protests.” Ireland, the UK, and Japan have all issued Hong Kong travel warnings since July.

[…] Dfat said the protests were expected to continue and had become more unpredictable and strongly recommended staying away from large public gatherings, adding that the risk was greater at night and on weekends.

As of Wednesday, the US state department and the Canadian government still had their alert to “normal precautions,” for the city.

Hong Kong is in its ninth week of consecutive mass protests, and police on Tuesday said they fired 800 canisters of teargas during protests on Monday as they looked to clear demonstrators from at least seven districts across Hong Kong. [Source]