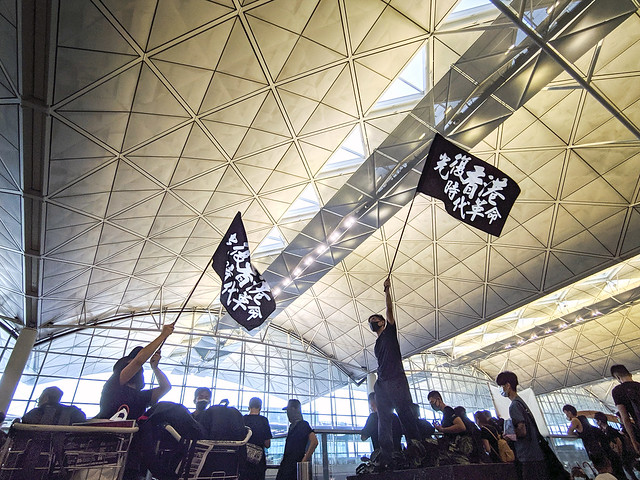 As protests against a proposed, and now postponed, extradition law entered their third month in Hong Kong, authorities on Monday effectively shut down the city’s airport, one of the world’s busiest, as protesters staged a massive sit-in. By day’s end, many protesters dispersed and airport operations slowly began to return to normal. Austin Ramzy and Gerry Mullany report for The New York Times:

The airport said in an afternoon statement that all flights had been canceled for the rest of the day other than those already en route to Hong Kong. Almost 150 departures and more than two dozen arrivals were affected, according to the airport’s website.

The move was a stark display of the power of the antigovernment protests, which are now in their third month, to disrupt the basic functioning of Hong Kong, an Asian financial hub known for order and efficiency. Its airport is a crucial connection point for regional air travel.

[…] Protesters gathered at the airport throughout the afternoon on Monday, eventually filling the arrival hall in the main terminal, before more protesters went upstairs to the departure hall.

The airport said in its statement that operations had been “seriously disrupted as a result of the public assembly at the airport today.” A Hong Kong official called it an “illegal assembly.” [Source]

The scene at Hong Kong’s airport, where thousands of protesters have flooded the terminal. The airport took the rare step of canceling all flights and shutting down. pic.twitter.com/BV559oF5NU

Hong Kong airport cancels more than 100 flights Monday afternoon: "Other than the departure flights that have completed the check in process and the arrival flights that are already heading to Hong Kong, all other flights have been cancelled for the rest of today." pic.twitter.com/MnDrgGi2Qh

In an unprecedented move, the Hong Kong airport has been shut down to all flights as thousands protesting police actions yesterday have flocked to it. I saw a line of protesters walking back/waiting for buses about a mile deep. Thousands still here. #HongKongProtests pic.twitter.com/WjvE3t3AQL

Everything's fine, got wifi still and nothing seems to be changing. Everything inside is shut down, but they strangely left the Bvlgari ad running which makes the whole ordeal feel even more dystopian. pic.twitter.com/dEfXZUxPoo

"Sorry for the inconvenience… But we're fighting for survival" pic.twitter.com/BRYO6hNzJo

The situation now at Hong Kong’s airport: a protester conks out, his sign says: “give us back our future. The future belongs to the youth.” pic.twitter.com/17DmQleMZQ

Mixed messages at the airport pic.twitter.com/ZhQvwVooYq

A striking new tagline for #HongKong, spotted on the wall at @hkairport, closed today by #HongKongProtesters: from #AsiasWorldCity to “Hong Kong: City of Tear Gas.”

What an image. And what an astounding series of events. Clearly HK Police behavior over weekend stoked outrage; thousands of protesters turned out, succeeded in shutting down entire intl airport (with help from an hysterical govt) & then walked home. No arrests. No violence. https://t.co/3N9PnWCRO3

The airport protest was staged in response to incidents of police violence against protesters over the weekend, in the latest skirmishes since the protests began almost ten weeks ago. In early June, protesters took to the streets to demand the withdrawal of an extradition bill that would allow the Hong Kong government to send accused criminals to China. While Chief Executive Carrie Lam has suspended the bill, she has not fully withdrawn it. Ongoing protests since then have drawn as many as two million people to the streets. The BBC reports on the protesters’ current demands:

The protesters’ demands have changed since the beginning of the protests and they are now calling for:
*Complete withdrawal of the extradition bill
*Withdrawal of the “riot” description used about the 12 June protests
*Amnesty for all arrested protesters
*An independent inquiry into alleged police brutality
*Universal suffrage for the Chief Executive and Legislative Council elections

And some also want the resignation of Carrie Lam, who they view as a puppet of Beijing. [Source]

In several areas of the city over the past weekend, police responded to protests with tear gas, even in enclosed spaces, and by firing non-lethal projectiles, one of which hit a medic and ruptured her eye–an incident which quickly became a focus for protesters:

Medical professionals protested at the Pamela Youde Nethersole Eastern Hospital, some with a right eye patch, referring to the incident on Sunday that a protester sustained a ruptured eye from an apparent police assault.

today's civilian press conference is about to start – with a moment of silence. one of the people is wearing an eye patch. pic.twitter.com/8ntWvQtG3R

A patch on the right eye is a symbol worn by many in @hkairport today, reminding passengers of the lost right eye of the female first aider. #antiELAB pic.twitter.com/Jov3y4WrLH

The heartbreaking case of the young medic who lost her eye yesterday is prominent and seems the biggest motivator of today’s otherwise spontaneous protest—airport protests were slated to end yesterday. So many have lost eyes—in Tahrir, in Gezi, now in Hong Kong. #HongKongProtests pic.twitter.com/Ru7JftyVWl

It’s quite something to see the Babylonian law graffitied and printed all over the Hong Kong airport. A woman was allegedly hit in the face by a bean bag round last night, reportedly rupturing her eye. Police brutality continues to be the focus of rage at today’s protest. pic.twitter.com/DDtBdFsPxR

Protesters sometimes chant “黑警還眼”: “dirty cops, give an eye back” (in reference to the protester who lost her eye last night) pic.twitter.com/f9R13qUhxg

So much art inspired by the violence last night. If your flight was cancelled think of how much more was cancelled for this young woman who got shot in her own city after a popular uprising against an ill conceived bill that would make suspected criminals face trial in China pic.twitter.com/dQ9jnzMKbo

Apple Daily’s high-resolution photos & video showing a bean bag round inside eye shield of the protester whose eye was ruptured https://t.co/cFvxDAYLNO

The BBC reports on the weekend’s violence:

One video inside Tai Koo station showed officers firing what appeared to be non-lethal ammunition at close range.

It also showed several police beating people with batons on an escalator.

In the bustling central Wan Chai district, petrol bombs and bricks were thrown at police, who responded by charging at protesters.

[…] There were confrontations in several central districts and police used non-lethal bullets in an attempt to disperse the demonstrators. Tear gas was fired in the busy shopping district of Tsim Sha Tsui as well as in Wan Chai on Hong Kong Island.

One image widely shared on social media showed a woman, who was reportedly shot by a police projectile, bleeding heavily from her eye. [Source]

#HongKong: around 300/400 protestors continue to stand ground in Hennessy Road, slowly being pushed back by every round of tear gas the police fires pic.twitter.com/6gLVcyzvXR

Some undercover officers were reportedly dressed as protesters and tear gas was fired in an MTR station. Demonstrators continue their hit-and-run tactics across #HongKong. https://t.co/VpysXyRUcT pic.twitter.com/vRYcdzjVWA

At a press briefing Monday, police defended their actions, including their firing of tear gas inside train stations, use of tear gas that had already expired, and deployment of undercover officers disguised as protesters. Holmes Chan reports for Hong Kong Free Press:

Top police officers on Monday defended the actions, saying that the Kwai Fong train station was an above-ground “semi-open space.” Li said that tear gas could be fired in indoor areas in emergency situations – despite its manufacturer saying otherwise in its instructions.

As for the use of pepperball launchers in Tai Koo station, Mak said that the weapon was meant for short-range use and was not a “firearm.” However, he was unable to tell reporters what the minimum safety distance was for firing the launcher. [Source]

1. THREAD: Today, August 12, marks the single most violent day in more than two months of the Hong Kong protests as we see the police all across town acting completely out of their control. Below is a list of what happened — again, all within a SINGLE DAY.

2. Shooting a female protester in close distance, which hit her in the right eye and blinded her permanently, according to information from doctors.

3. Shooting a first-aider on the scene, causing him to faint. Other first-aiders had to hold up a large banner with words of warning to halt the attacks against them.

4. Framing protesters as aggressive and arresting them on much harsher charges, after putting weapons inside their bags the moment they were pressed against the wall or ground.

5. Firing at reporters, many of whom were filming scenes on the ground from footbridges far away.

6. Allowing thugs — many with ties to organized crime, based on experience from previous incidents — to attack protesters and even passersby indiscriminately.

7. Pressing protesters on the ground so hard that they sank into their own blood.

8. Firing multiple canisters of tear gas inside Kwai Fong MTR station, which violated the factory instructions of no usage indoors.

9. Arresting residents inside Tai Koo MTR station, during which one protester was kicked down an escalator and dozens were shot from less than one meter amid the chaos.

10. Impersonating protesters by wearing the same gear (yellow helmets, black masks, etc.) and then ambushing them on site just as uniformed cops arrived for mass arrests.

11. Beating and arresting Jocelyn Chau, a community organizer based in City Garden, North Point, who wore no gear and were merely live-streaming events.

12. These are all crimes against humanity. None are normal. More protocols have been broken than I could count. The international community must pay attention to this kind of police brutality in Hong Kong. THREAD ENDS.

As Al Jazeera has reported, protesters over the weekend have perfected their “flash mob strategy,” during which they gather and then quickly disperse to a new location:

Allegedly inspired by Bruce Lee’s advice to be “formless, shapeless, like water,” the “be water” tactic allows protesters to evade police responses. From Erin Hale at The Independent:

“Be water” can feel chaotic, with people running from one train station to the next, but it is backed by a highly disciplined strategy. Protesters are often following alerts on Telegram and a website documenting police locations or protest groups needing backup.

“If we find stopping in one place is not workable, we will go around to different place to block the gate of a police station or a government department,” the North Point protester told The Independent.

The tactic has come to play a critical role in the Hong Kong protests, now in their ninth week, and a change from initial protests such as a massive event on 12 June that felt like a battle between protesters and riot police. [Source]

I love Hong Kong protest art even if it comes from a dark place pic.twitter.com/qlxrY2yXvZ