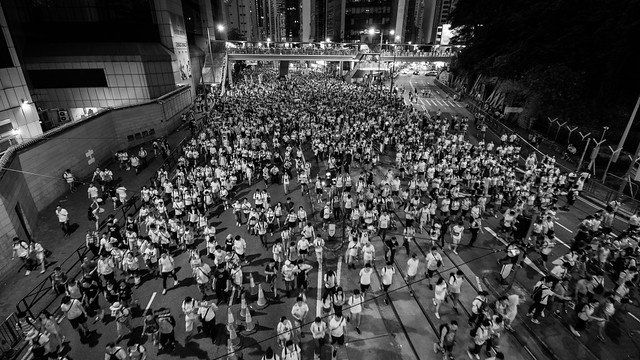 On Sunday, up to two million people in Hong Kong took to the streets in continued opposition to proposed amendments to the extradition law, which would allow the government to return suspected criminals to China, among other places. Following massive protests last week that drew as many as one million people and were met with a violent police response, Hong Kong Chief Executive Carrie Lam suspended plans to vote on the law; her government later issued a statement that said, “The chief executive apologized to the people of Hong Kong for this and pledged to adopt a most sincere and humble attitude to accept criticisms and make improvements in serving the public.” However, protesters rejected the apology and called for Lam to step down. From Keith Bradsher and Daniel Victor at The New York Times:

Hong Kong’s embattled leader, Carrie Lam, shelved the bill on Saturday and followed that up with a rare apology the next day, actions that pro-democracy activists dismissed as too little, too late.

And the sheer size of the demonstration — organizers gave an unverified estimate of close to two million of the territory’s seven million people — made clear the public remained unsatisfied.

Many of the protesters said they were disappointed with Mrs. Lam’s statement, saying it seemed insincere.

[…] The marchers’ resolve is sending tremors to Beijing, where President Xi Jinping’s carefully nurtured image of strength and competence is being put to the test.

“They want to send a message to Beijing,” said Willy Lam, an adjunct professor at the Center for China Studies at the Chinese University of Hong Kong. “If Beijing wants to do something that really infringes upon Hong Kong’s basic value, Hong Kong people will turn out in force, again and again, to pour out their discontent.” [Source]

Information about the protests has been tightly controlled within China, though searches for Hong Kong and related terms have been among the most popular on Weibo, according to FreeWeibo. The phrase “Let’s Go Hong Kong!” has been censored on the site. Some internet users in mainland China and Hong Kong have used the lyrics of songs to express support for the protests. From Echo Huang at Quartz:

Others are sharing content from another song composed by Lo called Queen’s Road East. He released the song in 1991 to depict the sentiment in Hong Kong as tens of thousands of people emigrated overseas out of fear of the Communist Party when the city would return to Chinese rule in 1997.

The title of the song refers to a major thoroughfare in the city’s Central business district. It was also one of the roads that was briefly occupied on Wednesday (June 12) as protesters gathered in the area as lawmakers planned to go ahead with the second reading of the extradition bill. One lyric in particular seemed to have prompted people to think of the protests: “Queen’s Road East turns into Queen’s Road Central… Crowds of people rush into Queen’s Road Central,” the lyrics go. [Source]

Hong Kong today, not a week ago.
For Consecutive 2 weeks, more than 1 million people marching down the street each week. pic.twitter.com/2exmsVAPzn

Hundreds of thousands of Hong Kongers of all ages are still marching towards Admiralty, even as the protest soon entering its 5th hour. Amazing resilience and unity exemplified today. pic.twitter.com/JxFyHjfIuG

30 years ago, I saw this same scene in Tiananmen Square as protestors parted to let ambulances through. Huge crowds can easily become violent mobs. But in China in 1989, and Hong Kong today, the vast crowds brought out the best of human nature: courage, wisdom, compassion. https://t.co/Xw1fGUiFVt

Very tellingly, the Hong Kong police is going for a very different optic by sending lots of female officers out this morning, contrasting with what looked like an almost exclusively male deployment last Wednesday 12 June. https://t.co/E62APH7mb4