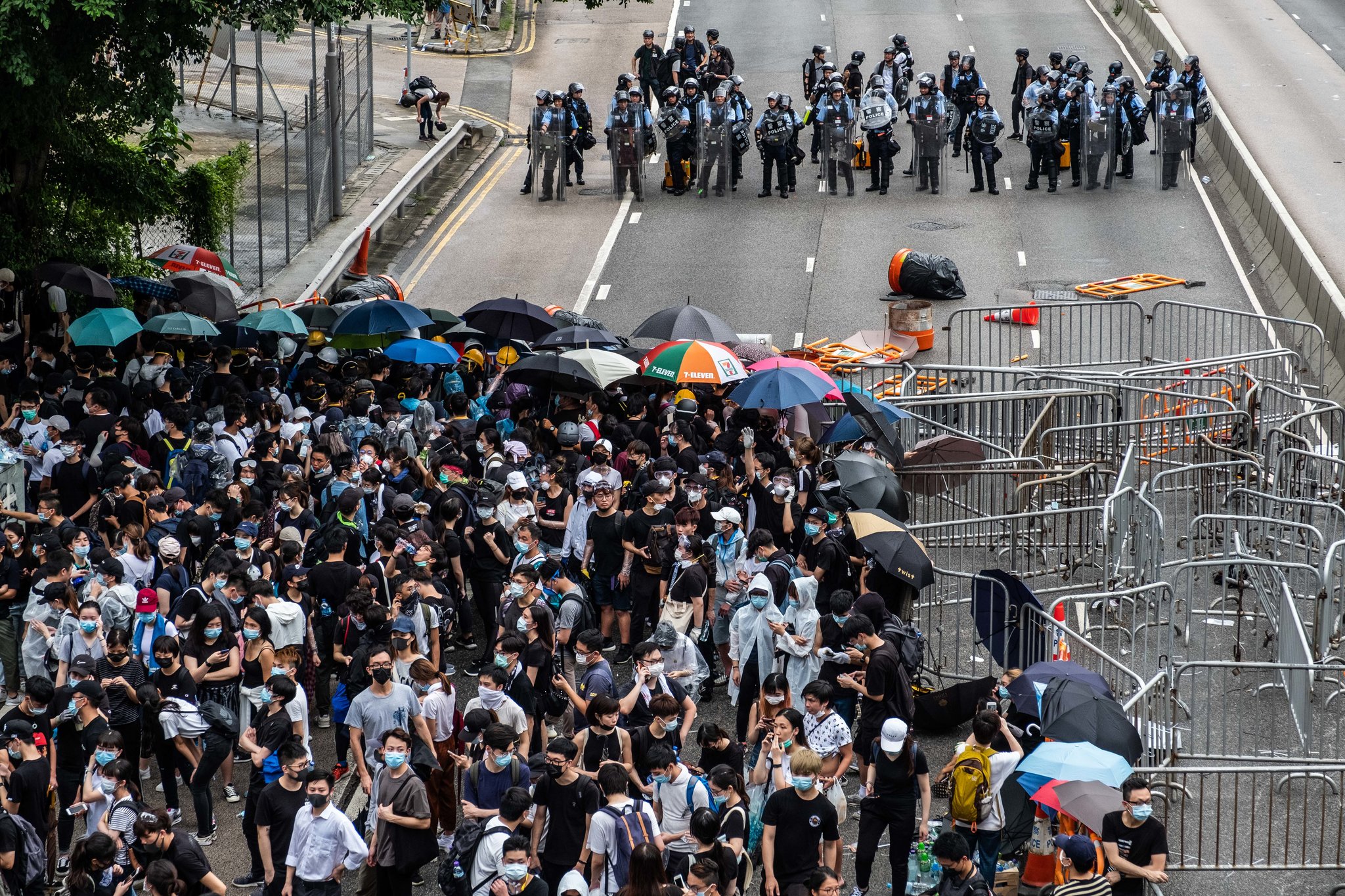 Mass demonstrations rocked Hong Kong on Wednesday, the day of a planned legislative debate over the controversial Extradition Bill, the target of another large-scale protest over the weekend which drew an estimated one million people. In the midst of the protests, the Legislative Council postponed the debate. As protesters stormed police barricades in Central Hong Kong, police fired tear gas and rubber bullets into the crowd, resulting in dozens of injuries. The recent demonstrations have been the largest protests since 2014’s Umbrella Movement. CNN sums up Wednesday’s events:

-Violent clashes erupted: Rubber bullets, pepper spray and hand-thrown tear gas were used to push back protesters who had occupied the city’s main thoroughfare near the government headquarters, as well as the roads around it, Hong Kong Police Commissioner Steven Lo Wai-chung confirmed.
-The protest was deemed “a riot”: Lo said the demonstration was being considered a “riot.” He added that police had been left with “no choice but to start to use force.” Up to 5,000 police in riot gear were deployed to guard the building. Protesters were seen wearing helmets, goggles and heavy-duty workman’s gloves, and pulling bricks from the sidewalks.
-Debate over the bill was postponed: The city’s legislative council had been due to hold the second reading of the controversial bill Wednesday morning local time, but it was postponed. The bill has been met with widespread opposition, including from the city’s traditionally conservative business community.
-What officials are saying: Despite the mass demonstrations, Hong Kong’s leader Carrie Lam has refused to withdraw the extradition bill, saying it is needed to plug loopholes to prevent the city from becoming a haven for mainland fugitives. [Source]

12th June at 12pm, and Harcourt road is filled with people again!

People are learning to be smarter and more flexible this time around, Mobilizing cars and different tactics to halt the traffic.

No one stands up like Hong Kong stands up.

The smartest, most resourceful teenagers you could ever hope to meet. 佩服. https://t.co/HVRa9hzY1F

A friend just WhatsApped, recalling a young person on the frontline: "We can't lose again, because if we do, we lose everything!" And then he charged forwards.
My friend is in tears recounting those words#HongKong #ExtraditionBill

When protesters stormed the barricades outside the LegCo building, police responded with tear gas and rubber bullets, leading to at least 72 hospitalizations. Human rights groups, including Human Rights Watch and Amnesty International, have condemned the violence. From The New York Times:

A line of protesters, many of them young people in black T-shirts, repeatedly rushed toward a ring of heavily armored police officers, only to be repelled. The officers lashed out with blows, rubber bullets, beanbag rounds, pepper spray and tear gas.

At times, only a thin metal barrier separated the two groups as the protesters’ front line slowly inched closer to the source of their anger — Hong Kong’s legislature.

One police officer held a giant red sign warning protesters: “Stop charging or we will use force.”

Many of the city’s lawmakers, from both the pro-democracy camp that opposes the extradition legislation and the pro-Beijing majority that supports it, failed to arrive at the council for a scheduled debate on Wednesday morning, after protesters surrounded the complex and blocked traffic. The council later said the debate was postponed until further notice. [Source]

Enraged Lawmaker Charles Mok argues with police on disrespecting the legislature: “This is Legco! Do you think you’re the boss here? … you’re beating up Hongkongers!” #HongKong #ExtradictionBill #HongKongProtests pic.twitter.com/LwLfZY43Qn

#HongKong chaos as riot police move in to clear the protest… #China pic.twitter.com/jvVse52jUO

this video–from an outlet often criticized for toeing the government line–shows how the police, not the protesters, made things "turn violent" https://t.co/YQi8YFcQzh

BREAKING: a total of 72 injured and hospitalised, including 2 in ICU serious as of 10pm HKT, after violent clash between anti-extradition bill protesters and police today in Hong Kong – local TV broadcaster

“I’m a journalist!”
Reply: “f***k your mother” (with untranslatable pun). This is the police talking to the press. In Hong Kong. It is hard to accept that we have got to this point, as it is totally unjustified: https://t.co/kEL1ASJfOB

Despite the violence, the protesters in general were commended by observers for their organizational skills and preparation:

They’ve started recycling. In the camp. That has only existed for 4 hours. pic.twitter.com/O9CiiJqwVH

This truck just rolled through in Centra with additional supplies, to cheers from the crowd. People are now helping to unload& unpack boxes of bottled water. The crowd claps. #HongKongProtest pic.twitter.com/EbFyUlsgOu

Just because people seem so natural in setting up help stations, supplies chains etc doesn't mean there was a conspiracy. #HongKongers know this stuff, are good at it. #extraditionbill
香港人埋位識做，79天的公民教育

Quick recap of what I saw this evening in #HongKong #ExtraditionBill protests. Organizers have turned Pacific Place, a luxury mall into a stockpile of resources, laying out plastic helmets, umbrellas, mineral water to distribute to protesters who need them. pic.twitter.com/QxfZNpdw4o

2am in the morning, young Hong Kong protesters volunteering to pick up the trash after all the chaos.

The protests have drawn broad and diverse participation from members of Hong Kong society:

imagine what it must feel like for cops to face a group of young people singing prayers. pic.twitter.com/8AbAEyYNOI

Protestor lifts a sign demanding retraction of the extradition bill. On the right, a row of middle-aged pastors stands facing police five rows deep at entrance to legislative building. They want to put themselves between police and the youth, they say. #hongkong #反送中 pic.twitter.com/GBy2ec0zlc

she’s asking if the police want to send her back to china, and when he tried to offer her a snack cos she’s “tired” she said “i don’t take things from running dogs”

Not all heroes wear capes, as the saying goes. These drivers will most likely lose their jobs but deserve all our respect. #HongKongProtests #NoExtraditionToChina pic.twitter.com/DWwvbtrWeH

In China, news of the protests, which Chief Executive Carrie Lam condemned as “organized riots,” has been censored in the media and online platforms including WeChat and Weibo. Despite the censorship, some internet users have found ways to comment on the situation on the few approved posts online, according to a report by Abacus:

I sent a photo to a friend on the mainland and he said, “Wow, so many people were traveling for Dragon Boat festival." ? He had no clue what else that many people would be doing.

“Special conditions” and “large scale activities” in Hong Kong today mean cross border buses from Shenzhen are being rerouted. It’s incredible that Shenzhen is only a 14 minute train ride from HK yet almost everyone I’ve spoken to here in SZ doesn’t know what is going on pic.twitter.com/foK2uixG4n

I havn't posted anything on WeChat except this one image, with a caption "tear gas". Friends in China tell me they cannot see my post. #censorshiptech pic.twitter.com/S5HqcaihdI

What a timing?! Telegram is the key plateform for #HongKong #antiELAB protest organisers. https://t.co/dSBVnX3AXv

Protest organising Telegram groups all appear to be encountering issues. Messages coming though very slowly. Who is tempering with Telegram?

Lam appeared on television in tears, claiming she had made “personal sacrifices” for Hong Kong and comparing the protesters to spoiled children, which elicited a strong response on Twitter:

Hong Kong leader Carrie Lam released a video statement about today’s protest. Her comments are in line with the official response we hear from Beijing—which backs her. #HongKongextraditionbill #China pic.twitter.com/hOGhQ9NOdv

Asked if she will withdraw the #ExtraditionBill, Carrie Lam said as a mother, she cannot budge every time her son demands something #HongKong https://t.co/nO92qsIy0o

A group of Hong Kong mothers responds to Carrie Lam’s “mother” statement: “citizens are not your children […] HK kids don’t want you to be their mother. They want you to be a responsible leader and respond to society’s demand for w/d #extraditionbill.” https://t.co/C8QPoZVBPJ

#CarrieLam: What a coldblooded "mother" you must be – use police violence to crush your "children?!" If you were ever freely elected, you were to represent the #HK ppl, not to order police use of violence against peaceful protests. https://t.co/LgeDZOUJ0d

This reminds me of Jackie Chan's infamous 2009 remark, "我們中國人是需要管的," which was generally — and misleadingly, I think — translated as "we Chinese need to be controlled." https://t.co/4aFMIwDwHy

Cartoonists and others have produced powerful, viral images from the protests:

apparently people on the HK subway are getting sent materials about the extradition law via airdrop https://t.co/7FTufZbUCk

This is very clever: https://t.co/skWvTp4byV

Based on this original image:

Going down for the night. Mood tense but doesn’t appear to be about to escalate. Protesters looking to remain around LegCo until morning when they could attempt to disrupt the second reading of the extradition bill. Police may try to clear, but not looking imminent. pic.twitter.com/GdB80YeZIL

As night fell in Hong Kong, fewer people were on the streets, but police were preparing for further demonstrations in coming days.

After a long & emotional day, i hope this vid will bring you peace before going to bed.
These people, who don’t know each other before, have been singing the same hallelujah song for more than 18 hours in front of the police.
Again, only in #hongkong #extraditionbill #AntiELAB pic.twitter.com/Xo6TgEElOS

And… Before they leave for the day, protestors are tidying up their supplies… #HongKongProtest pic.twitter.com/MkQqAeWKpS