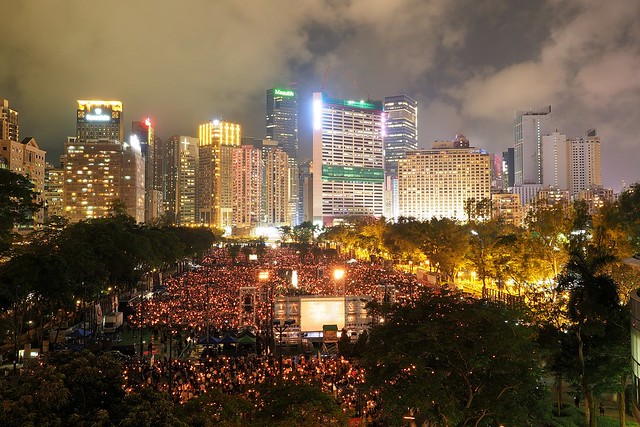 Hundreds of thousands of protesters took to the streets in Hong Kong Sunday in opposition to a planned law that would allow for extradition to China, among other places. The march was one of the largest in Hong Kong’s history and was an unprecedented display of public opposition to Beijing’s encroaching power in the territory. Jennifer Creery reports for Hong Kang Free Press:

Jimmy Sham, a spokesperson for organisers, said around 1.03 million people attended the march – a figure that was calculated by volunteers along Hennessy Road.

The march was organised by the Civil Human Rights Front – a coalition of pro-democracy groups.

Police urged protesters to march from Victoria Park before the 3pm start-time to ease overcrowding.

[…] The organiser turnout figure would make it the largest protest Hong Kong has ever seen, surpassing the turnout seen at mass rallies in 1989 and 2003. [Source]

Austin Ramzy reports for The New York Times on the concerns raised by the proposed law, which is expected to pass the Legislative Council this month. Recent disappearances or detentions of individuals in Hong Kong by Chinese security forces have elevated concern over the issue:

The immediate focus of the protest was a proposal to allow extradition to mainland China, which critics are worried the authorities will use to send dissidents, activists and others in Hong Kong, including foreign visitors, to face trial in mainland courts, which are controlled by the party.

Despite the large numbers, neither Beijing nor the Hong Kong government showed any willingness to back down, and officials confirmed that a second legislative reading of the bill would proceed as scheduled on Wednesday.

[…] Despite the size of the protests, the government was unlikely to be swayed, said Ivan Choy, a senior lecturer in the department of government and public administration at the Chinese University of Hong Kong.

“The major problem is that Xi Jinping holds power in China, and he is a strongman,” Mr. Choy said, referring to China’s top leader. “He will back up Carrie Lam’s decision to push forward.” [Source]

The official China Daily immediately issued an editorial blaming “foreign forces” for instigating chaos in Hong Kong, while news on the protest was censored inside China:

#HongKong/#香港 has become a censored search term on Chinese #Weibo owing to the protests today, as #China will never allow the public to see images of large-scale protests. A search of "香港" only brings up posts from users with a blue V. These are either govt or media accounts.

Joyu Wang of the Wall Street Journal describes the scene at the march, which some estimate attracted one out of every seven Hong Kong residents:

A snaking crowd that included young families, students, professionals and the elderly streamed through the city, reflecting unprecedented and widespread opposition to the latest move by Beijing to bring the former colony to heel. Critics say the proposed law could be abused to target political dissidents and would expose citizens to the mainland’s more opaque legal system, where detainees could be unfairly jailed and abused.

The protest was peaceful for much of the day, with demonstrators chanting “Go Hong Kongers!” and patiently lining up in sweltering heat to reach the final rallying point at government headquarters. Around midnight, after most had dispersed, hundreds of protesters brawled with police near the city’s legislature. Some protesters hurled metal barricades, while police fired pepper spray back.

[…] The estimated turnout was double that of a similar protest in 2003, when 500,000 people marched against proposed national-security legislation that was later withdrawn by the government.

Unlike then, however, Beijing now has a much tighter grip on the city and has increasingly moved to silence opposition voices. [Source]

In the early hours of Monday, some protesters remained at the LegCo building, where a clash broke out as police used pepper spray in an effort to disperse them. From Al Jazeera:

Police used batons and fired pepper spray at protesters, who still managed to close off part of a nearby road. Several people on both sides appeared to be injured, and ambulances were called.

Small groups of young protesters had planned to stay outside the city’s legislature until Wednesday when the extradition bill is due to have its second reading.

But police moved in on them after their permission to protest expired at midnight.

Within minutes scenes of chaos unfolded as protesters fought with officers who were soon backed by riot police. [Source]

Hong Kong’s Chief Executive Carrie Lam, who has the backing of Beijing, gave a press conference after the march, in which she refused to withdraw the bill. From the Bloomberg live blog:

She makes it very clear she is not backing down or delaying — she just answered that directly.

[…] Lam stuck to her guns while still seeking to empathize with the masses who came out to protest. She opened the door to further amendment of the bill, while seeking to address the concerns of people who see it as another step toward integration with the mainland. We’ll see soon whether she did enough to blunt the outrage on the streets. [Source]

The march is the first mass public political action since the Umbrella Movement of 2014, when protesters occupied the streets of Hong Kong for almost three months to demand greater democratic rights. The sentencing of several of those protest leaders recently, with one more scheduled for this week, sparked public outrage at the erosion of Hong Kong’s autonomy. Gerry Shih and Timothy McLaughlin report for the Washington Post:

Organizers and political activists said that opposition to the extradition measure was unusually broad and that they were able to garner more support compared with previous demonstrations, such as the Occupy Central and Umbrella Movement in 2014 that sought universal suffrage.

“People are starting to see how horrendous this bill is that [lawmakers] are pushing ahead,” Ho said. “People are coming back. Hong Kongers who tried so hard to do something for the city and then gave up are coming back.” [Source]

Irony is that the extradition amendments have united the pan-democrats that splintered following the Umbrella Movement. https://t.co/gtrmcZGzY3

About 10% of the entire population of Hong Kong turned out to protest today. It's been 16 years since the Article 23 protests in 2003… some of the same people, and also a new generation.

No one could be sure of turnout, given cynicism and resignation among many people in Hong Kong. But this protest looks to be huge. Keep in mind the territory has 7.3 million people — anything in the hundreds of thousands means every person would know someone who participates. https://t.co/dev30LyblG

The protesters are barely moving and are urging the police to open more lanes and let them pass. pic.twitter.com/EOFq3vmeQD

Two and a half hours later – Hong Kong’s rally against extradition is going strong. Feels like a historic moment. Many people who don’t protest normally are here. pic.twitter.com/gKsLPFDN6v

A single photo can’t do this protest justice, but this is Wanchai at 6:35 pm. The head of the march passed thorough this spot more than three hours ago. pic.twitter.com/fzznjcjClY

This is an amazing time lapse of the hundreds of thousands of protesters in Hong Kong. pic.twitter.com/GlGtIwwdoq

Gloucester Road half blocked at 2 am pic.twitter.com/23jbmdZq3B

The chant is 反送中, the theme of the day, “Oppose sending to China” pic.twitter.com/hrvVZqwMVC

Marches in solidarity with Hong Kong were held in cities around the world:

Chants of We Love Hong Kong and We Love Freedom are shouted from central #Sydney CBD (#Australia). Protesters oppose the #HongKong law that would allow for extradition to mainland China. Police estimate 2000 attending. #反送中 #NoChinaExtradition pic.twitter.com/AycfpKVNjO

Photos from the #NoToChinaExtradition protest in New York yesterday, sent by a friend. #反送中 #HongKong pic.twitter.com/BSEnlGYbEy

THREAD: I’m here at the Chinese consulate in Vancouver where at least 100 people are gathered as part of a global assembly, in 27 different cities in 10 countries this weekend to speak out against the recent changes to Chinas extradition law #cdnpoli pic.twitter.com/X5uJfoYuWS

Among the protesters were students from Mainland China, who came to show support for HKers' fight against the #ExtraditionBill. They said they knew the risk they might face after returning to China, but had come anyway.

Out of all the pix I took today, this one moved me the most pic.twitter.com/F9vMqZNPaX

We stand with all freedom-loving people of #HongKong. In their faces, we see the longing for freedom, & are reminded that #Taiwan’s hard-earned democracy must be guarded & renewed by every generation.

As long as I’m President, “one country, two systems” will never be an option. https://t.co/yYckfeNxw0