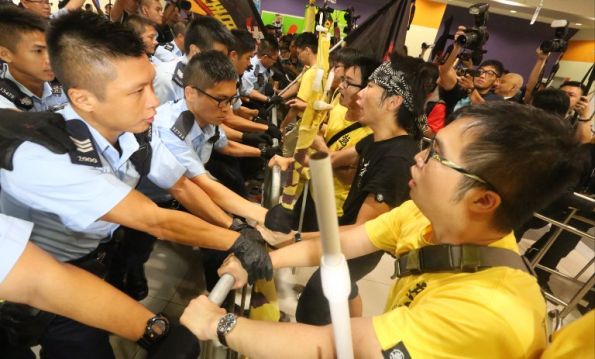 Following the decision by the National People’s Congress to only allow officially-approved candidates to stand for election for Hong Kong’s chief executive, activists have pledged to intensify their protest campaign. But while Occupy Central and other protest groups gained widespread public support in earlier actions calling for democratic reforms, it is not yet clear how sustainable the movement is in the long-term. In the meantime, government propagandists are continuing their hard line on the protests, while also limiting media coverage of related news. From Emily Rauhala at Time Magazine:

Recent editorials in the mainland’s major dailies cast the central government as rational and mature, and pro-democracy campaigners as emotional, reckless and adolescent. In one Global Times piece, Hong Kong’s well-planned, peaceful, pro-democracy protests were dismissed as an ineffective and dangerous “clamor.” The central government’s decisions are “legal, fair and reasonable,” according to state news-wire Xinhua; those who oppose their rules are “troublemakers” bent on “sabotage.”

Academics are also in on it. Speaking in Hong Kong on the eve of Beijing’s most recent announcement on political reform, Wang Zhenmin, dean of the law school at Tsinghua University in Beijing, urged Hong Kong to accept a “less perfect” democracy over none at all, according to an account by the New York Times. Calling for patience and trust, he likened Beijing to mother and Hong Kong to child. “The mother always acts in the best interests of her children,” he said. “Her intentions are pure.”

For Beijing, the parent-child metaphor is a rhetorical home run. In one quick, emotionally charged turn, it manages to both intimidate and undercut opponents. We, the parent, have the power, it warns. And that’s a good thing, little one, since you cannot be trusted on your own. The argument is circular, sure. But by the party’s logic, it justifies the decision to keep full democracy from Hong Kong. [Source]

But, as Kelvin Chan and Christopher Bodeen report for AP, China’s traditional methods of dealing with mainland dissidents may not work in Hong Kong, where residents are used to a much greater degree of freedom of speech and association. Yet even the freedom to protest doesn’t guarantee the intended results. From the Economist:

Many of the participants at Sunday’s rally despair at convincing the bureaucrats in Beijing to change their position—but they feel they need to put up a fight anyway. “Normal protests are no longer useful,” in the words of Agnes Chow Ting, a student protester. She led a failed attempt after the rally to “ambush” a delegation of officials from the central government.

Such actions may attract international attention but indeed, they are less than likely to sway decision-makers in Beijing. Li Fei, a deputy secretary-general of the National People’s Congress Standing Committee, told local politicians on September 1st that the committee believes Hong Kong’s police will be capable of handling any disturbance that might be caused by “a small group of people seeking to undermine Hong Kong”, as he characterises the Occupy movement. [Source]

Indeed, even protest organizers acknowledge that China’s position will likely sway some of their supporters, as Fion Li and David Tweed report for Bloomberg:

China’s uncompromising stance means “the number of people joining us will not be as big as we expect, because of the very pragmatic thinking of Hong Kong people,” an Occupy Central with Love and Peace founder, Benny Tai Yiu-Ting, said in an interview. China ruled Aug. 31 that candidates for the city’s first planned popular election must be screened, dashing demands for free elections from the activist group.

Tai, who had previously said he was confident it could mobilize at least 10,000 protesters, described mustering that number now as a “maybe.” Occupy Central will choose a date to minimize possible economic damage to the city, he said.

“It is interesting how quickly they have backed down,” said David Zweig, professor of political science at the Hong Kong University of Science & Technology. “If this was a game of chicken, the mainland said: ‘We’ll drive straight through this’ and Occupy Central has pulled aside and said: ‘We aren’t willing to destroy Hong Kong.’” [Source]

Other participants in the Occupy Central movement deny waning support for their cause and pledged to move forward with protests. Anne Marie Roantree and Clare Baldwin report for Reuters:

“Our target is a 2017 chief executive election that meets international standards. Although this target has been brutally strangled by the National People’s Congress Standing Committee, the significance of our movement will not end at this point,” the Occupy Central with Love and Peace movement said in a statement emailed to reporters on Tuesday.

“We Hongkongers won’t accept failure in our road to democracy.”

The group has threatened to lock down the former British colony’s financial district on an unspecified date unless China grants full democracy, a proposal many business leaders have said could undermine the stability and development of the city. [Source]

But despite its apparent resolve, Beijing has misstepped in its response to the protests, according to Sophie Richardson of Human Rights Watch:

Beijing’s basic desire for Hong Kong since its 1997 return from British sovereignty has revolved around the territory’s political quiescence and economic vigor. Beijing has known it would have to tolerate the degree of civil liberties existing at that time, which exceed those available to people on the mainland. But as the people of Hong Kong pushed for the promised democratic rights, Beijing reacted by doing what it does with the rest of the mainland: blatantly rejecting international treaty obligations to respect political rights, deploying rusty but threatening rhetoric opposing peaceful free expression, rigging public consultations and then claiming the results represent “mainstream opinion,” distorting Hong Kong’s domestic desires for greater political rights as dangerous “foreign interferences,” and even making a show of military hardware where it is manifestly not needed.

These missteps have created exactly what Beijing doesn’t want: Occupy Central activists vowing to peacefully blockade traffic in the heart of Hong Kong, a united pan-democratic opposition, and Hong Kong legislators pledging to reject Beijing’s proposals. In other words, Beijing has created a protracted crisis precisely where it didn’t want one. [Source]

The long-term fallout from the current stand-off between Beijing and the Hong Kong opposition remains to be seen, but, as the New Yorker’s Evan Osnos points out, it raises larger questions about the future of China:

The crisis, which will likely grow, is proving to be a test not only of Hong Kong’s political culture but also of which political ethic will prevail across China in the years ahead: globalism or nationalism, two fundamentally different conceptions of how China will relate to the rest of the world. Hong Kong takes pride in its role as Asia’s original global city, a cultural and political mashup with a raucous, multilingual press corps and hot and noisy local politics—a largely borderless world of money, people, and ideas. Its courts rely on English common law, which is, in theory, free from political influence.

[…] In theory, China’s President, Xi Jinping, could have sought a middle road that would have opened up the nominating process enough to produce a competitive election. But, when the protests began earlier this year, Beijing worried that backing down would embolden further acts of resistance, not only in Hong Kong but also on the mainland. “If we yield because some people threaten to commence radical, illegal activities, it would only result in more, bigger illegal activities,” Li Fei, a mainland official, told Hong Kong lawmakers.

That is a strategy that points toward confrontation. Beijing chose the safer, short-term solution, but it left in place the ingredients for growing tension. Benny Tai, a law professor and opposition leader, said that the announcement opened a new “era of resistance.” “Today is not only the darkest day in the history of Hong Kong’s democratic development,” he told reporters. “Today is also the darkest day of one country, two systems,” a reference to the relationship between Hong Kong and the government in Beijing. [Source]

See also an interview with Martin Lee, the founding chairman of the Democratic Party in Hong Kong, on Bloomberg.