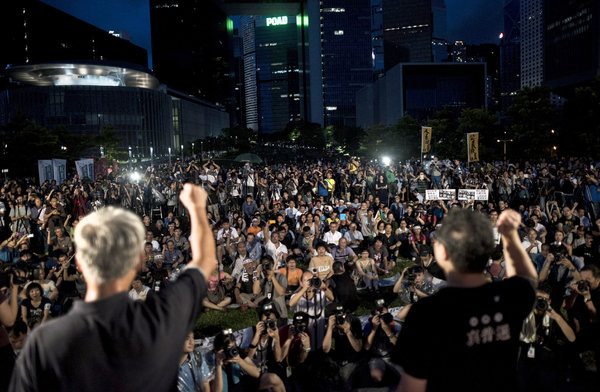 For months, pro-democracy groups in Hong Kong have been escalating their demands for universal suffrage and other democratic reforms as Beijing has steadily tightened its control over the territory. On Sunday, the National People’s Congress Standing Committee dashed any hopes for democracy when it outlined the structure of future elections for chief executive, saying the position would be chosen by popular vote, but only after all candidates won the endorsement of more than half of a committee that is aligned with Beijing. Stuart Leavenworth at McClatchy reports:

Since it was reunited with China in 1997, Hong Kong has enjoyed a semi-autonomous status, with freedoms of assembly and speech that residents on the mainland can only dream about. But China’s recent actions towards the former British colony has alarmed many Hong Kongers that they may soon lose rights they took for granted.

At issue is Beijing’s interpretation of Hong Kong’s “basic law,” a type of constitution that resulted from Great Britain’s decision to return the territory to China in 1984. The basic law includes language granting Hong Kong a “high degree” of autonomy, including the ability of residents to elect their chief executive in 2017.

How that election will be conducted is now in dispute. Activists in Hong Kong want groups and political parties in Hong Kong to be free to nominate their own candidates. Beijing officials and state media have said for months that will lead to chaos and is in violation of basic law.

On Sunday, the National People’s Congress affirmed that position, meaning that a Hong Kong committee seen as beholden to Beijing will decide which two or three candidates can vie for Hong Kong’s top office. The nominating rules released Sunday require that candidates both “love the country (China)” and “love Hong Kong.” [Source]

The decision by the National People’s Congress Standing Committee drew battle lines in what pro-democracy groups warned would be a deepening confrontation over the political future of the city and of China. The committee demanded procedural barriers for candidates for the city’s leader that would ensure Beijing remained the gatekeeper to that position — and to political power over the city.

Li Fei, a deputy secretary general of the committee, told a news conference in Beijing that the nominating guidelines — including a requirement that candidates “love the country, and love Hong Kong” — would “protect the broad stability of Hong Kong now and in the future.”

The move closes one of the few avenues left for gradual political liberalization in China after a sustained campaign against dissent on the mainland this year under President Xi Jinping. In pressing its offensive in Hong Kong, Beijing has chosen a showdown with a protest movement unlike any it has ever faced on the mainland. [Source]

Li Fei’s press conference was the scene of a vigorous protest:

Dressed in black and wearing yellow ribbons, members of the democratic camp were escorted out of the auditorium after they shouted and held up signs reading “shameful” and saying Beijing had lost credibility.

Pro-establishment people in the crowd clapped as the democrats were led out.

Alex Chow, the head of the Hong Kong Federation of Students, was escorted out jeering and heckling. Student activists said they would begin boycotting classes in mid-September and that students at 11 schools had confirmed their participation.

About 100 activists had gathered for Li’s speech, some waving British colonial flags and banners with an “X” over the Chinese characters for “communism” amid a heavy police presence.

Occupy Central, the group which has been the primary organizing force behind recent pro-democracy protests, vowed to launch a number of civil disobedience actions in response to Beijing’s decision, including a takeover of the city’s financial district and student strikes. From the BBC:

Co-founder of the Occupy Central protest group, Benny Tai Yiu-ting, said: “This is the end of any dialogue. In the next few weeks, Occupy Central will start wave after wave of action.

“We will organise a full-scale act of occupying Central.”

On Sunday a group of pro-democracy supporters protested in a park in front of Hong Kong government headquarters.

One protester, Henry Chung, told Agence France-Presse: “I am very sad. We have waited so many years. But now we have nothing.” [Source]

The guidelines issued by Beijing will create the framework for an election reform bill that will be voted on by Hong Kong’s Legislative Council. But pro-democracy representatives in the LegCo are vowing to veto the plan. Jeffie Lam reports for the South China Morning Post:

The government is expected to put forward a concrete reform plan later this year, and must win a two-thirds majority in the 70-strong Legislative Council, meaning at least four pan-democrats must break ranks and vote “yea” for the plan to pass.

But the 27 pan-democrats in the Legislative Council now stand in a united front, vowing to veto the plan after watching the live broadcast from Beijing where Li Fei, Basic Law Committee’s chairman, spelled out the framework approved by the Chinese parliament on Sunday afternoon.

“Our allies in the Legco are very determined to veto such a disgusting reform proposal,” said Democratic Party chairwoman Emily Lau Wai-hing, who said Beijing was “full of lies”.

She said universal suffrage went beyond “one person, one vote” where any true democratic election should offer voters a real choice of candidates. [Source]

In his South China Morning Post column, Peter Guy argues that the struggle for Hong Kong’s future is less about democracy and more about who controls the economy:

Hong Kong faces its equivalent of a constitutional crisis that will define its future. The only contributions from our government and business elites are either stern and condescending admonitions or a taunting look inside the lifestyles of the rich and famous.

At last, someone influential explained that Hong Kong and Beijing’s struggle was not for democratic principles or process, but for who had the right to control Hong Kong’s economy and industry. It was always about money.

Speaking in Hong Kong last week, Wang Zhenmin, a dean of Tsinghua University Law School and a former member of the Basic Law Committee who acts as an adviser to the central government, defended the plan, saying: “Less-than-perfect universal suffrage is better than no universal suffrage.”

[…] Hong Kong has always been a practical and capitalistic society where democracy is an abstract, foreign concept because it was never available. After all, democracy is a difficult concept to define and describe in both theory and practice. But people do know when their basic rights as free people are denied or infringed upon. [Source]

An editorial carried by the flagship newspaper of the Communist Party of China hailed the landmark decision as a major legal decision as well as a major political resolution.

The editorial said the decision was legal, fair and reasonable as it was made in accordance with the Constitution and the Hong Kong Basic Law. It also responded to mainstream opinions in Hong Kong society and complies with the region’s realities and common wishes of the public, according to the editorial.

The editorial said universal suffrage in the selection of the HKSAR chief executive, which has been the most important political issue since Hong Kong’s return to China in 1997, is important for the “one country, two systems” policy as well as national sovereignty and security.

The key point at stake was whether to abide by the Basic Law and whether Hong Kong should be governed by those who “love the country and love Hong Kong,” it said. [Source]

Read the full text of the Standing Committee decision.