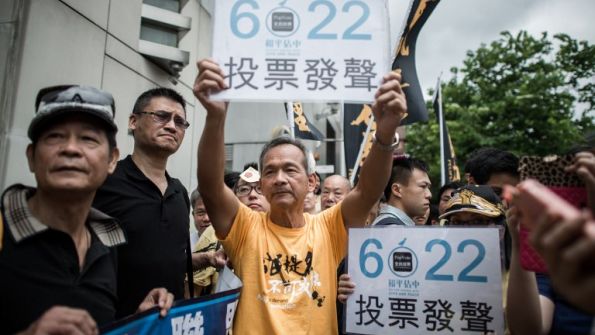 This week Beijing released a key policy document known as the “white paper” that reasserts the Communist Party’s authority over Hong Kong.  The document, which spells out a controversial interpretation of the “one country, two systems” model that was negotiated as part of Hong Kong’s return to Chinese rule in 1997, has sparked widespread criticism from people in Hong Kong. From The Economist:

People in Hong Kong have responded with alarm, and some defiance, to a white paper issued by China’s leaders about the city’s political future. In rallies outside Beijing’s representative office in Hong Kong on June 11th, politicians and protesters burned copies of the report and accused officials of treating the city’s constitution “like toilet paper”.

Legislators accused Beijing of reneging on its treaty obligations under the 1984 Sino-British declaration, signed between Margaret Thatcher and Prime Minister Zhao Ziyang, to make Hong Kong a semi-autonomous region of China. The agreement said Hong Kong would enjoy a high degree of autonomy and maintain its capitalist system for a period of 50 years until 2047; and many of the city’s social and political freedoms (such as being able to protest against the Communist Party) have indeed been retained.

But the white paper stressed that Hong Kong’s high degree of autonomy “is not full autonomy” and the city’s ability to run its local affairs comes solely from the authorisation of the central leadership. It also says that Hong Kong residents hold “too many wrong views” with regard to the “one country, two systems” principle that governs the territory’s relationship with Beijing. The white paper’s suggestion to “above all be patriotic” has grated with many who object to equating patriotism with support for the Communist Party. The report also provoked the ire of the city’s judiciary for suggesting that judges have a “basic political requirement” to love the country. The Hong Kong Bar Association hit back with a statement warning that imposing political tests on judges would undermine Hong Kong’s rule of law. [Source]

The white paper was published as the Hong Kong government prepares to release an electoral proposal for the 2017 election of chief executive.The protest group Occupy Central will be holding an informal referendum later this month to ask citizens to vote for their preferred type of electoral reform. The New York Times reports:

As pro-democracy groups are demanding that Beijing adhere to its previously stated intent to allow universal suffrage, the current administration of Hong Kong’s chief executive, Leung Chun-ying,  is scheduled to release a proposal before the end of the year on selecting Hong Kong’s next top official.

Raising the stakes in the debate are plans by the group Occupy Central to stage a civil disobedience campaign that threatens to block traffic in the city’s central business district if the proposal does not allow the public to nominate the candidates for chief executive; Beijing has been sending signals that it will only allow candidates who show loyalty to the Communist leadership.

Occupy Central will hold a citywide unofficial vote from June 20 to 22 to rally public support for its protest plans. A more radical group of activists has pledged to occupy the city’s Legislative Council if the government devises a reform proposal that restricts who can be nominated as Hong Kong’s leader. [Source]

Following pressure from the Chinese government, British banks HSBC and Standard Chartered have stopped advertising with Apple Daily, a popular Hong Kong newspaper known for its critical coverage of Beijing. The advertising pullout is seen as the latest effort by the Chinese government to tighten its media influence in Hong Kong. Michael Forsythe and Neil Gough at The New York Times spoke with Next Media Limited about the political motivation behind the banks’ decision.

The executive, Mark Simon, of Next Media Limited, said two London-based banks, HSBC and Standard Chartered, ended longtime advertising relationships late last year with the paper, Apple Daily, after being told to do so by the Chinese government.

“The government is running their business now,” Mr. Simon said in an interview. “HSBC and Standard Chartered don’t have to do what they did.”

Both banks said their advertising decisions were commercial.
[…] Next Media Limited, a newspaper, television and Internet company based in Hong Kong and Taiwan, is known for its strong advocacy of democratic freedoms in Hong Kong. Mr. Simon, the company’s commercial director, said a representative from HSBC told him that the decision to stop advertising came after the deputy director of the central government’s liaison office in Hong Kong, Yang Jian, told the bank to end its advertising relationship.

[…] Losing HSBC and Standard Chartered, which were until last year among Next Media’s biggest financial advertising clients, has hurt the Hong Kong-listed company. The two banks had spent a combined $3.6 million in 2013 on Next Media advertising before HSBC’s spending ended in August and Standard Chartered’s ended in December, Mr. Simon said. Neither has advertised since. [Source]

In an interview with Michael Forsythe at The New York Times, Anson Chan, the former chief secretary of Hong Kong, also expressed her concern about the advertising pullout and the implications that the action may have for other companies engaged in business with China.

Q. On the pulling of advertisements, hasn’t this been going on before with Chinese state-owned enterprises and local companies that do business with China?

A. In a way I don’t condone it, but I understand that local Chinese enterprises, particularly those that want to do business in China, feel they have to acquiesce. But an international bank like HSBC and Standard Chartered, if you act this way, it is the first step down a very slippery slope. What happens the next time they call up and say we don’t like you doing business with certain clients? Are you also going to cave in?

If an international bank with a huge presence in most parts of the world behaves like this, what sort of message are you giving to people in Hong Kong, who are desperately fighting for faithful implementation of “One Country, Two Systems” protection of our core values, maintenance of the rule of law and all the rights and freedoms that we currently enjoy? What chance is there for the average man on the street in Hong Kong? And what sort of message are you sending to other countries where you operate? [Source]

In response to The New York Times’ coverage of the advertising pullout and the “white paper” firestorm in Hong Kong, Bob Lee at China Daily accused the American newspaper for running “groundless” articles as a part of a “hidden agenda” to “lambaste Hong Kong’s political development.”

It is rare for a world-renowned newspaper like the New York Times to repeatedly lambaste Hong Kong’s political development. It is even more amazing that the INYT has printed approximately 130 news items relating to “Hong Kong democracy” in less than six months.Common sense and logic tell us the NYT, as one of the world’s most prominent newspapers,should have more pressing issues then poking its nose into the affairs of a tiny place like HongKong. Does Hong Kong really carry so much weight in geopolitics that it requires intensive global media coverage? Or do the NYT and its Western peers have a hidden agenda? Our clear-minded readers have their own answers.

Based on my observations, NYT’s densely packed editorials, opinion pieces and coverage are timed to coincide with Hong Kong’s political reforms. It is eager to take sides with the city’s opposition camp, especially during sensitive times in June when “Occupy Central” organizers are to hold a city-wide unofficial vote for “ultimate universal suffrage proposal” and a more radical group of activists has pledged to occupy the Legislative Council if the SAR government produces a reform package they don’t like.

[…] For the sake of Hong Kong society, it is wise for foreign media to avoid saying things that might help turn the city into a giant political cauldron. The Western media may enjoy throwing its weight around, but Chinese people, including Hong Kong locals, don’t appreciate being bossed about. [Source]

In addition to HSBC and Standard Chartered, other foreign business communities also supported Beijing with some chambers of commerce urging protesters to back down. From Quartz:

But here, Beijing has support from foreign business too. The Hong Kong Chamber of Commerce, as well as the chambers of commerce from Canada, Italy, India, and Bahrain–whose members include executives from Air India, Infosys, and the Royal Bank of Canada—have asked the demonstrators to call off their protest and argue their case through other “channels available.” In October, eight Hong Kong and mainland Chinese business groups issued a statement condemning the planned protest, saying it could harm Hong Kong-China relations. And according to Hong Kong’s chief executive, some financial and professional services firms are planning to sue the protesters for any damage caused during the demonstration.

Maybe it shouldn’t be that surprising that British banks like HSBC and Standard Chartered would comply with Beijing’s orders about where they should advertise. After all, they have long historical ties with China, and they and other banks are the largest foreign lenders, after Hong Kong, to Chinese companies. [Source]

Meanwhile, the People’s Liberation Army headquarters in Hong Kong now displays its name in giant neon characters at night in what some see as a show of Beijing’s power. South China Morning Post reports:

An addition by the People’s Liberation Army to the city’s harbour light show has divided opinion, with some seeing the neon display on the garrison’s Admiralty headquarters as sinister and others describing it as a mere decoration.

Professor Ray Yep Kin-man, of the City University’s department of public policy, said the display was meant to emphasise the central government’s sovereignty over Hong Kong.

“It is sensitive timing,” Yep said, a day after the State Council issued its white paper emphasising Beijing’s “comprehensive jurisdiction” over Hong Kong.

[…] But pro-government politician Regina Ip Lau Suk-yee said it was no different from displays on commercial buildings such as the Bank of America tower. [Source]

On June 4th, tens of thousands of people in Hong Kong held a candlelit vigil to commemorate the 25th anniversary of the Tiananmen Square protests in Beijing.