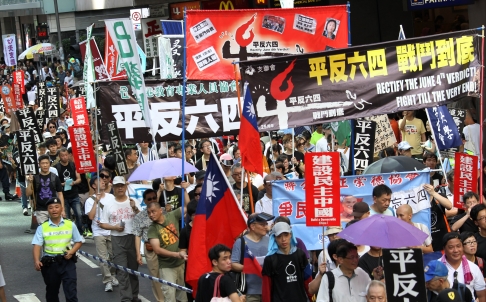 For a quarter of a century, Beijing has made great efforts to erase the memory of June 4th, 1989. This year, to mitigate commemoration in the lead up to the 25th anniversary of that fateful day, activists have been detained and the media discussion tightly controlled. In Hong Kong, where residents enjoy greater access to freedoms of press, assembly and speech, June 4th has been observed each year with a candlelight vigil in Victoria Park organized by the Alliance in Support of Patriotic Democratic Movements in China—last year, 150,000 people attended, despite heavy rains. Prior to this years’ vigil, around 3,000 people marched through Hong Kong last weekend, where their interactions with pro-Beijing activists put rising mainland-HK tensions on display:

The marchers left Victoria Park in Causeway Bay at 3pm yesterday and reached government headquarters in Admiralty two hours later, calling for the 1989 pro-democracy movement to be vindicated.

During the march, at Southorn Playground in Wan Chai, a war of words erupted with activists from the pro-Beijing “6.4 Truth” campaign, which argues that the crackdown in 1989 was “reasonable”.

The two sides exchanged insults before police stepped in to calm things down.

[…] This year the [Alliance in Support of Patriotic Democratic Movements in China, the group responsible for the Victoria Park vigil] has faced challenges from both sides of the political spectrum. […] [Source]

Similar verbal scuffles were seen last month at the opening of the June 4th Museum in Hong Kong’s Tsim Sha Tsui district (the museum is also sponsored by the Alliance), and reflect stark political and cultural differences between many mainlanders and their Hong Kong counterparts. McClatchy DC describes the situation:

A British colony until 1997, when China once again assumed sovereignty, Hong Kong is scheduled to hold its first-ever election in 2017 to pick a chief executive, and many Hong Kong residents are convinced that the communist government in Beijing is seeking to rig the outcome. Polls show that young people in Hong Kong are particularly discouraged about their future and are increasingly willing to challenge Beijing, even if such a confrontation could prove explosive.

[…] The situation is further complicated by splits among pro-democracy groups on what type of deal to broker with Beijing, and when and how they should marshal protests to amp up the pressure.

[…] Hong Kong and China are joined at the hip but are worlds apart in politics and culture. Hong Kong residents speak Cantonese, a dialect of Chinese vastly different from the Mandarin spoken in Beijing. They drive on the left _ drivers in mainland China drive on the right _ and obey traffic laws, something all but unheard of in Beijing. Hong Kong has its own currency, travel documents, court system and civil liberties, including freedoms of speech and assembly that don’t exist on the mainland.

[…] When Great Britain transferred Hong Kong to mainland China in 1997, it was thought that a younger generation would slowly start to identify with China. That hasn’t happened _ at least not yet. A recent poll of more than 1,000 residents found that people under 40 are increasingly identifying themselves as “Hong Kongers” as opposed to “Chinese.” The poll, headed by Michael E. DeGolyer of Hong Kong Baptist University, also found that people under 40 were far more dissatisfied with Hong Kong’s governance than older age groups. […] [Source]

Officials in Beijing have said that direct elections in 2017 could be “disastrous” and bluntly warned the U.S. not to meddle in Hong Kong affairs after democracy advocates met with Joe Biden in Washington in April. Meanwhile, concerns about Beijing leveraging its economic clout into more direct control of Hong Kong’s media have been on the rise.

As the Hong Kong Alliance in Support of Patriotic Democratic Movements in China prepares for this years’ vigil amid an atmosphere of tension between Beijing and Hong Kong, a report from the Wall Street Journal notes how the Victoria Park vigil has changed over the past 25 years:

The vigil has been held annually since 1989, and in recent years, [Alliance vice-chair] Mr. Tsoi said, more mainland Chinese visitors have also been participating. As well, more local youth have been joining, he said—including some that weren’t even born when the tragedy took place.

The mood has also grown angrier, he said. “For the first few years [in the 1990s], the overall mood of participants was overwhelmed by sadness and they mourned for people who died in the massacre,” he said. “More recently, they’ve become more eager to express their anger towards mainland China, including regarding its violation of human rights,” he said.

[…] While the approaching Tiananmen Square anniversary has prompted numerous arrests on mainland China, Mr. Tsoi said the vigil’s organizers have faced no obstacles.

[…] Watching the TV reports [in 1989], Mr. Tsoi said, made a deep impression on him. “People made sacrifices in Beijing for the democratic movement, while meanwhile we were still safe and alive in Hong Kong,” he said. “So we have the responsibility to do something and to fight for justice.” said Mr. Tsoi. [Source]

Organizers of the vigil say they expect more than 150,000 attendees this year. While there have been no explicit measures to prevent the gathering in Victoria Square, the South China Morning Post notes that some critical of the Alliance are endorsing an alternative event. The Alliance’s website, along with that of the June 4 Museum, are currently offline, which Mr. Tsoi told Quartz is due to denial of server attacks possibly launched in order to “prevent people from getting information.” For more on the 25th anniversary of the June 4th crackdown on Tiananmen Square, see CDT’s prior coverage.