China Cautions US To Stay Out Of HK Affairs 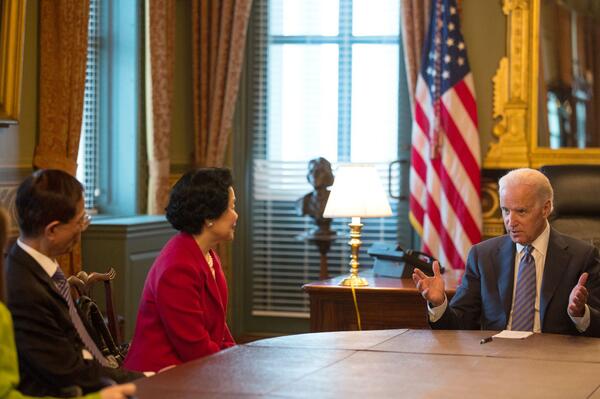 China warned the United States not to meddle in the affairs of Hong Kong after two pro-democracy advocates held meetings in Washington with vice president Joe Biden and others last week. Reuters reports that Hong Kong is at odds with mainland China over a proposal that all candidates for 2017’s presidential election be vetted by a Beijing-friendly panel:

Anson Chan, a respected former senior Hong Kong official, and Martin Lee, one of the founders of the main opposition Democratic Party, met Biden at the White House last Friday, in one of the most high-profile attempts to flag such concerns internationally.

But the United States must “refrain from interfering”, Xinhua quoted an official of the Foreign Commissioner’s office in Hong Kong as saying.

The official urged the United States to “proceed discreetly” on Hong Kong affairs to avoid damage to China-U.S. ties as the city is now in a “sensitive period” of political reform. [Source]

Chan and Lee also met with representative Nancy Pelosi earlier in the week and testified before a Congressional panel on China. The South China Morning Post reported that Sherrod Brown, the co-chairman of the commission, described the future of freedom and democracy in Hong Kong as being “under serious threat:”

“China promised to let the people of Hong Kong freely elect their leaders… China is backtracking on these promises,” Brown, a Democrat, said after the hour-long meeting.

“This commission has made it a priority to monitor and report on developments in Hong Kong, and we will continue to do so.” [Source]

Fred Hiatt of The Washington Post spoke with Anson Chan during her US visit, and she expressed surprise at “the rate of deterioration” of Hong Kong’s democratic values under the oversight of Beijing:

So in 2017, when Hong Kong is finally supposed to freely elect its chief executive, democracy advocates fear that Communist leaders will find a way to control the field of candidates — to allow a choice between “Puppet A or Puppet B,” as Lee told me. Meanwhile press freedom shrinks, not only because of physical attacks such as those on Lau but also as businesses feel pressure not to advertise in independent media.

Lee and Chan want a more open political process. Chan said it would produce a chief executive who would still want to get along with the mainland but who also would stand up for democratic values. She said that how much the United States and other nations seem to care will shape Beijing’s approach to the 2017 election rules.

“Their minds are not made up,” she said. “They are always watching what the rest of the world does.”

Back in China, however, a spokesman for the Foreign Commissioner’s office dismissed the idea that Hong Kong’s core values are under threat. From Xinhua News:

“Over the past 17 years since Hong Kong’s return, the region has seen the successful implementation of the ‘one country, two systems’ framework, which contributed to Hong Kong’s great socioeconomic and democratic development. As a result, the people in Hong Kong are enjoying unprecedented democratic rights and freedom, which has won international acclaim,” said the spokesperson.

The spokesman urged the United States to “proceed discreetly” regarding Hong Kong’s affairs to avoid damage to China-U.S. ties as Hong Kong is currently at a critical time of political reform. [Source]