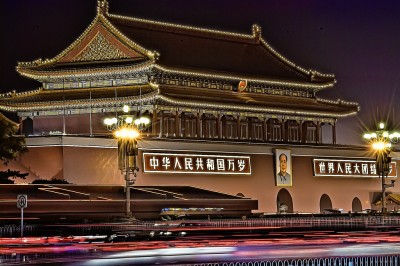 Yet more detentions have been added to the dozens already carried out ahead of the 25th anniversary of the 1989 Tiananmen crackdown next week. From AP:

Wang Aizhong, a founder of the Southern Street Movement, which calls for an end to one-party rule, was detained in the southern city of Guangzhou on suspicion of picking quarrels and provoking troubles, according to his lawyers Zhang Xuezhong and Wu Kuiming.

[…] “In the past, these activists got no more than warnings, but formal detentions show the political climate has grown tenser,” said Zhang. “There are no grounds to persecute those who should discuss in private a historic event that did happen in our country’s history.”

[…] “It is a political detention,” Zhang said. “The motivation to detain him and the charge are not the same.”

Participants in Wang’s movement have protested in the street, holding up signs and banners to declare their demands. Several of them also have been detained ahead of the anniversary. Most of those detained have been charged with picking quarrels and provoking troubles, a charge critics say is used to disguise political persecution. [Source]

AP’s Didi Tang wrote more on the use of apolitical public security charges in political cases this week.

Yu Shiwen and his wife, Chen Wei, were detained for “gathering a crowd to disturb public order” after organising a public gathering in Henan province in February to commemorate the victims of the crackdown in 1989, according to the activist group Chinese Human Rights Defenders.

Yu and Chen live in Zhengzhou , the capital of Henan, and were students activists at Sun Yat-sen University in Guangdong province during the Tiananmen protests. They were detained earlier this month after attending the event in Hua county, the rights group said.

[…] Hua county is the birthplace of former Communist Party general secretary Zhao Ziyang, who was purged for failing to take tough action against the protesters in 1989. [Source]

According to Deutsche Welle, Zhao’s former political secretary Bao Tong has been removed from Beijing by police [zh]. Bao is one of four figures connected with June 4th whose views and recollections were reported by AP’s Louise Watt and Isolda Morillo on Friday. Also interviewed were student leader Wu’er Kaixi, Tiananmen Mother Zhang Xianling, and artist Chen Guang, who took part in the crackdown as a young soldier.

Bao […] was imprisoned for seven years. Since his release in 1996, he has lived under house arrest, his moves observed, his visitors screened by security services who sit at a desk in the lobby of his high-rise apartment building. A reporter from The Associated Press was followed into an elevator and stopped from going up to Bao’s floor, but another managed to go up in a second elevator in the meantime.

In his apartment in western Beijing, with photos of Zhao on the shelves and walls, Bao spoke of his disappointment as how, despite the passing of 25 years, “It is as if time has stopped for China.”

Afraid though the party may be, they also use fear—of detention, and for those already detained—as an instrument of silence, Chang Ping writes at South China Morning Post:

I’m reminded of a heated argument I witnessed in Chengdu in 2010. Activist Tan Zuoren had just been sentenced to five years in jail for “inciting subversion of state power” after he exposed the shoddy construction of school buildings that collapsed in the 2008 Sichuan earthquake and published an online article on the June 4 movement.

A woman who claimed to be a good friend of Tan’s laid into his lawyer, Pu Zhiqiang [recently detained], for contributing to his heavy sentence by accepting foreign media interviews despite a government warning not to do so, for the selfish reason of boosting Pu’s own profile. […]

Some people defended Pu, pointing out that Tan himself had made it his life’s work to expose government misdeeds and speak up against any “black-box operations”. If he had wanted to protect himself and was willing to play nice with the government, he would not have done the things he did.

Nevertheless, the woman and her supporters countered, even if Tan had been willing to sacrifice himself, his lawyer, friends and family should have protected him, even if they had to suffer the humiliation of being called government sympathisers.

Today, Pu himself is in trouble, and his case brings up the same issue, the same debate. This exposes the hypocrisy of China’s rule of law. So, merely disclosing details of the case and voicing protest can lead to a heavier sentence? Even if this fear was based on mere innuendos and empty threats, such actions are against the law. This shows the Chinese government does not follow the law, but runs the country like a triad boss. [Source]

Human Rights Watch argued on Thursday that such heavy-handed tactics would eventually fail:

“Xi Jinping, like his predecessors, is on futile mission to control discussions about Tiananmen and broader issues,” said Sophie Richardson, China director at Human Rights Watch. “The Chinese government only compounds the mistake of 1989 by suppressing discussion of June 4 itself, and silencing independent voices who seek to make positive contributions.”

[…] “China may now be the world’s second largest economy, but it can’t afford another 25 years of denial and repression,” Richardson said.  “Demands for accountability have grown exponentially.  Beijing needs to accept the importance of peaceful criticisms, and allowing open discussion about June 4 is the place to start.”

See more on the pre-anniversary crackdown at CDT, and a list of detentions and other restrictions from Chinese Human Rights Defenders.