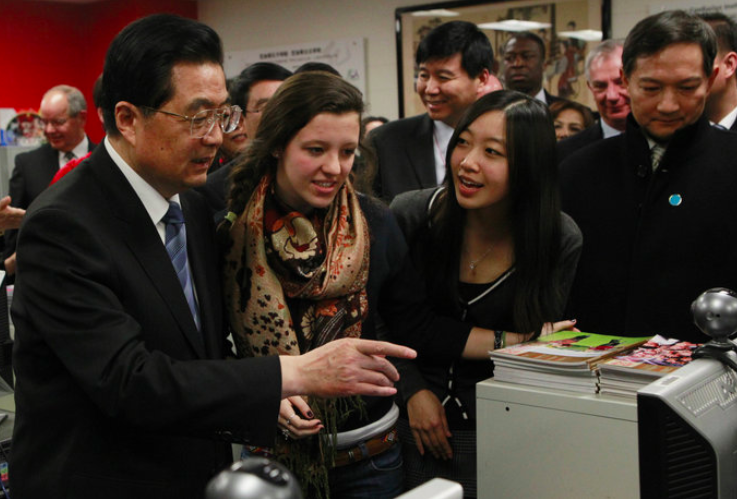 The Sydney Morning Herald’s Fergus Hunter reports that four Australian universities hosting Chinese government-funded Confucius Institutes have signed contracts explicitly stating they “must accept” Beijing’s authority over the teaching centers. The Institutes, which are Chinese Education Ministry-funded programs offering Mandarin-language and cultural courses, have stirred intense controversy in recent years over allegations of academic censorship of topics sensitive to Beijing. A number of universities in the U.S. have shuttered their Confucius Institute over concerns that the programs are undermining academic freedom.

Agreements signed by the University of Queensland, Griffith University, La Trobe University and Charles Darwin University state in identical clauses that they “must accept the assessment of the [Confucius Institute] Headquarters on the teaching quality” at their centres.

The wording, which does not place any qualifications on Hanban’s overriding authority, appears to hand Beijing more control than versions signed by other universities and will fan concerns about the institutes, which are a key plank of the Chinese Communist Party’s global soft power effort.

[…] John Fitzgerald, an emeritus professor at Swinburne University of Technology and leading expert on Chinese politics, said the clauses on teaching quality assessments could place universities in breach of higher education standards if they related to the awarding of degrees.

[…] “Australian universities enjoy freedom and autonomy because they are generally believed to be self-governing institutions not subject to foreign government interference. Anything that undermines that belief risks harming the sector as a whole.” [Source]

Exclusive: We have obtained 11 of the 13 agreements governing Confucius Institutes at Australian universities. It has taken quite a while. The previously undisclosed contracts yield some interesting insights about the different approaches taken by unis. 1/ https://t.co/CcS6S4bKoe

In response to the contract revelations, the Australian government announced it has initiated a probe to assess whether the Confucius Institutes hosted at Australian Universities require registration as a source of foreign influence under the new foreign influence transparency scheme. As of now, none of the 13 host universities have registered the Institutes. The Guardian’s Paul Karp reports:

In a statement, the education minister, Dan Tehan, said he had spoken to Universities Australia on Thursday to stress “the importance of all universities that host foreign institutes complying with the foreign influence transparency scheme”.

The scheme, created in the term of the last parliament, requires people and bodies acting on behalf of foreign governments and related entities – including lawful activities – to sign up to a public register.

Registrations have included the United States Studies Centre and the Perth US Asia Centre, but so far none of the 13 universities that host the China-funded Confucius Institute centres have registered.

On Thursday, the Universities Australia chief executive, Catriona Jackson, said universities were “looking carefully at their agreements with foreign entities to ensure they comply with the new laws”. [Source]

In a separate article, The Sydney Morning Herald’s Hunter writes that Human Rights Watch’s Australia director has spoken out against having Confucius Institutes on Australian campuses:

Elaine Pearson, the Australia director of Human Rights Watch, said the revelations should cause universities to have a “long hard think” about whether it was appropriate for them to have Confucius Institutes.

“That a foreign authoritarian government is able to dictate to some universities the terms [regarding] teaching quality is completely unacceptable,” she said.

“These latest revelations reinforce the need for Australian universities to reject Confucius Institutes entirely. The institutes are fundamentally incompatible with a robust commitment to academic freedom.” [Source]

“Confucius Institutes expose U.S. universities to espionage, to the threat of theft of intellectual property, which we are seeing far too frequently at colleges and universities,” Sen. Ted Cruz, a Texas Republican, said in an interview with NPR.

Cruz attached an amendment last year to the U.S. military spending bill that says a university with a Confucius Institute cannot also receive money from the Defense Department program that pays for Chinese language training.

[…] Riding a wave of rising American interest in China, the first Confucius Institute in the U.S. opened at the University of Maryland in 2004. The institutes quickly expanded, growing to more than 100 in the U.S. and more than 500 worldwide.

But, forced to choose, at least 13 U.S. universities have closed Confucius Institutes in the past year, in order to preserve Defense Department funding. They include the University of Oregon.

“It’s very clear that faculty were anguished about the choice,” said Dennis Galvan, the university’s vice provost for global engagement. “They would have much preferred to not have to choose between these two projects that they had created and nourished for more than a decade. So it was a reluctant decision.” [Source]

In the letter to UM, Hawley wrote that the Confucius Institutes exist to enhance China’s image in western countries and are a threat to academic freedom.

“Most troubling of all, Confucius Institutes pose a danger to our national defense and security,” Hawley wrote. “Our nation’s top law enforcement and national security officials have been vocal about the threat of Confucius Institutes and other Chinese initiatives as a conduit for espionage and research theft.”

University leaders are reviewing Hawley’s letter and deciding if they need to take any action, spokesman Christian Basi said.

“We really appreciate the senator’s concerns that he had described in his letter,” Basi said. “We take any threats to academic freedom, to free speech and certainly to espionage against the United States very, very seriously.” [Source]

Meanwhile in Africa, Confucius Institutes are gaining ground as Mandarin education expands in several countries. Kenya, for example, is set to start teaching Mandarin to elementary school students beginning in 2020, with the goal of increasing job competitiveness and deepening trade ties with China. Susie Berya at Global Voices looks at the rise of Mandarin Chinese language education in East African schools:

As China strengthens its already robust trade and infrastructural ties with Africa, Chinese-government funded Confucius Institutes (CIs) and Confucius Classrooms (CCs) are on the rise in East Africa. As of 2018, China has established 27 CCs and at least 51 CIs all over Africa.

[…] Tanzanian President John Magufuli announced in May 2019 that Mandarin has been added to the national Certificate of Secondary Education Exams (CSEE) and students will be able to sit a Mandarin language exam. Just like Uganda, local teachers are receiving training to become adept at Mandarin and teach it in secondary schools.

In early July 2019, the Muslim University of Morogoro, in eastern Tanzania, launched a CI Chinese language center. At the inauguration, Ave Maria Semakafu, deputy permanent secretary of the country’s Education Ministry, informed the audience that Marangu Teachers College in Kilimanjaro, northern Tanzania, may also offer Mandarin as a major course. Ongoing negotiations between Tanzania and China could lead to a Mandarin program at Marangu Teachers College that will enable teachers to learn Mandarin similar to Swahili and English degree programs, like those offered at the University of Dar es Salaam and the University of Dodoma, who currently offer a Mandarin degree. [Source]