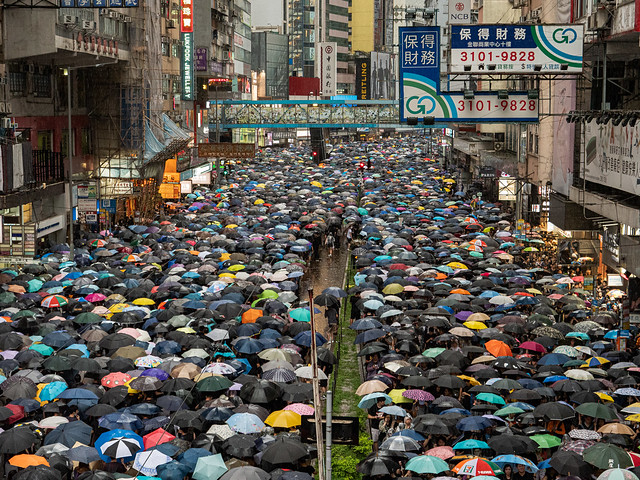 After three months of ongoing protests in Hong Kong, Chief Executive Carrie Lam has announced the full withdrawal of the proposed extradition bill. Opposition to the bill first ignited the protest movement, but protesters have since shifted their focus to the subsequent official response and other concerns about China’s infringement of Hong Kong’s political and judicial independence, leading many to conclude that Lam’s action is “too little, too late.”

Beijing’s apparent endorsement of the withdrawal of the bill comes after the biggest popular challenge to Chinese President Xi Jinping’s rule since he took power in 2012.

It was not clear when the recording was made. The withdrawal needs the approval of the Legislative Council, which is not expected to oppose Lam.

[…] Some lawmakers said the move should have come earlier.

“The damage has been done. The scars and wounds are still bleeding,” said pro-democracy legislator Claudia Mo. “She thinks she can use a garden hose to put out a hill fire. That’s not going to be acceptable.”

Many people on street corners after nightfall were shouting: “Five demands, not one missing.” [Source]

Amy Qin of The New York Times reports on the remaining demands of the opposition movement and why protests may still continue even after this concession from Lam:

Despite Mrs. Lam’s concession on the extradition bill, the demonstrations are likely to continue. After Mrs. Lam’s announcement on Wednesday, many protesters vowed in social messaging groups and online forums to continue taking to the streets, referring to the slogan: “Five demands, not one less.”

The protesters’ five demands are: the formal withdrawal of the extradition bill, the independent investigation into the police response, amnesty for arrested protesters, direct elections for all lawmakers and the chief executive, and not labeling those at a June 12 protest as “rioters.”

Though Mrs. Lam’s decision may help assuage some protesters, experts said it was unlikely to satisfy a small group of young demonstrators who have become more militant in recent weeks. A test of the public’s reaction to Mrs. Lam’s decision, they said, could come as soon as this weekend, since the biggest, most disruptive protests often happen on weekends.

In recent weeks, as clashes between protesters and the police have intensified, the focus of the demonstrations has shifted to police violence, and Mrs. Lam’s actions on Wednesday could be seen as falling short. [Source]

In view of the fact that Carrie is flogging the IPCC dead horse again, I’m thinking of getting this graphic put on a T-shirt. The IPCC has no investigative powers! pic.twitter.com/nxQFu25znB

How can we compromise when the situation on ground is like this? How can we trust for a government to genuinely engage in dialogue when all they have done in the past three months was hide behind this hideous force of police?

Many protesters have expressed their determination to continue until all five demands are met. Verna Yu reports for the Guardian:

Hongkongers interviewed by the Guardian on Wednesday said the bill’s withdrawal would not dampen the protests, as the crisis had snowballed into a much bigger movement. Infuriated by the police’s use of force, they want the government to set up an independent body to investigate police wrongdoing, a request Lam again rejected on Wednesday.

The police’s use of force has escalated in recent weeks while protesters have also resorted to increasingly violent measures. Police have used water cannons, teargas, rubber bullets, beanbag rounds and severe beatings to quell unrest, and also chased protesters into residential areas, metro stations and even ferry piers. In retaliation, protesters have thrown molotov cocktails at police, and vandalised and set public facilities on fire in what they said were defensive moves.

[…] A masked spokeswoman dressed in black speaking on behalf of a group of protesters at a press conference late Wednesday said the withdrawal of the bill was a quick fix like “a band-aid on rotten flesh”.

“Does the government honestly think that the trauma, grievances and anguish they caused could be so easily dismissed with two syllables? Expecting the word ‘withdraw’ to salvage all they have caused is childish and tone-deaf at best,” she said. [Source]

The bill’s withdrawal comes after Lam was heard in leaked audio expressing regret about her handling of the protests and that she would have stepped down “if she could,” heightening concerns that Beijing is guiding the Hong Kong government’s response to the public anger. In a New York Times op-ed, Yi-Zheng Lian writes:

Whatever the protesters’ next response to Wednesday’s announcements, and however the government then follows up, Mrs. Lam’s off-the-record talk with the business group last week holds hints of what may come in the medium term.

She said that she had gotten clear hints from Beijing that no matter what happened in the streets of Hong Kong, China would not send in the People’s Liberation Army; Beijing just wouldn’t risk damaging its “international profile,” which took so long to build, as “not only a big economy, but a big, responsible economy.” There is unintended mercy in cold calculus, apparently.

But this also means, in the words of Mrs. Lam, that the authorities in Beijing are “willing to play it long,” and “so you have no short-term solution.” Put another way: China’s strategy is essentially to play a game of attrition, conceding as little as possible while expecting the Hong Kong government and the local police to hold out longer than the protesters, despite the risk of imposing significant costs on the city in the meantime. [Source]

Since this was leaked,protesters've been circulating photos of MarcoLeung,the man who fell to his death on #June15, the day Carrie 'suspended' the bill. The insinuation's clear:all that sacrifice & NOW she's doing what we told her to do before all this happened. #TooLittleTooLate pic.twitter.com/WbtauYPctC

1. Too little and too late now — Carrie Lam's response comes after 7 lives sacrificed, more than 1,200 protestors arrested, in which many are mistreated in police station.

Judging on the reaction on Telegram, #CarrieLam’s address has been well received pic.twitter.com/fgt2VdV6UJ

TOO LITTLE. TOO LATE.#HongKongProtests have gone way pass the Extradition Bill. Since July, we can hardly hear chanting of "withdraw the bill" anymore. "5 Demands, Not One Less" is chanted every night at 10pm in all communities nowadays. pic.twitter.com/bt3143MQ1l

Scoffing and head-scratching over HK on Weibo: "I don't understand," one netizen says. If the bill was just, then why retract it? If it wasn't, then why promulgate it?" "HK resistance proves effective. Mainland resisters get jailed," says another. "I guess we're just worth less." pic.twitter.com/gxBSF4FERY

Tonight is the first night I’ve heard the 10pm chorus in my neighbourhood of people shouting protest slogans (it started over a week ago). Carrie Lam’s decision to withdraw the bill has not satisfied Hong Kong

CAN INTERNATIONAL MEDIA STOP TALKING AS IF THE #HONGKONGPROTESTS MOVEMENT HAS ALREADY WON? IT IS SIMPLY NOT TRUE.

By throwing crumbs at us, she is continuously insulting the collective wisdom of Hongkongers.

We will not accept anything less than the 5 demands, that has been our message since the beginning. This is a fight for freedom and democracy, HKers will fight on, united as ever.#hk

So many graphics are already made by #HongKong-ers who are rushing to Twitter with #5DemandsNot1Less.

This one from Telegram shows the #HK flag (originally with the five-petal Bauhinia) only has one petal, symbolizing how only 1 of the #HKprotests’ 5 demands is met. #antielab pic.twitter.com/PEl6tNci6z

8. Protestors do not see the withdrawal as a victory. And the situation is not de-escalating. What we need is concrete institutional guarantee, not some personal string-pulling to rid oneself of responsibilities and intl. pressure.

Immediate response from an admin of one of the most followed telegram channel for HK protests:

“If we accept the government’s deal, our friends who have died will never forgive us.” pic.twitter.com/escfFjQAOP

An immediate response from an anonymous #HongKong netizen to Carrie Lam agreeing to one of the 5 demands from protesters:

"If you are okay with this, we are too."

[The essence of my beautiful mother tongue Cantonese is just non-translatable] pic.twitter.com/DpUNySkIWv