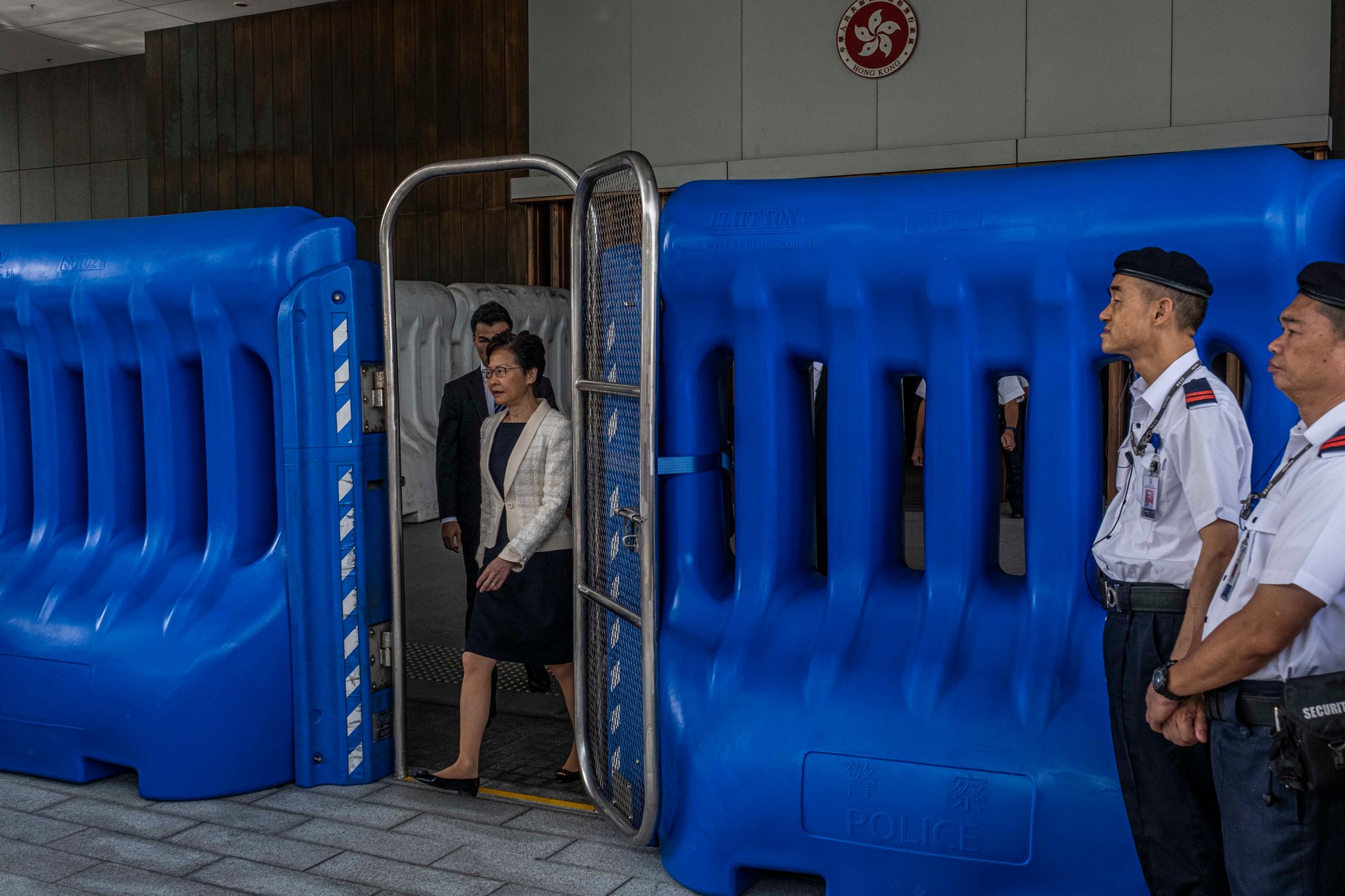 Amid unrest in Hong Kong over suspended extradition rules and the official response to earlier opposition, a pair of recent reports from Reuters has highlighted Beijing’s tight control over the supposedly autonomous territory. On Friday, following several high-profile arrests of pro-democracy lawmakers and activists, James Pomfret and Greg Torode cited sources including senior Hong Kong and mainland officials, reporting that Beijing had rejected the HK government’s overtures about yielding to two of the protesters’ key demands: full withdrawal of the extradition bill, and an independent inquiry into police violence. On Monday, Pomfret, Torode, and Anne Marie Roantree followed this with reporting based on leaked audio of a closed-door talk by embattled Hong Kong Chief Executive Carrie Lam delivered to a group of Hong Kong businesspeople last week. In her address, she lamented her “very limited” room for maneuver, expressed regret about her handling of the extradition bill. In line with earlier reporting by Pomfret that Beijing was blocking Lam’s exit, Lam also said that she would step down if she “had a choice”:

At the closed-door meeting, Lam told the group that she now has “very limited” room to resolve the crisis because the unrest has become a national security and sovereignty issue for China amid rising tensions with the United States.

“If I have a choice,” she said, speaking in English, “the first thing is to quit, having made a deep apology.”

[…] Lam suggested that Beijing had not yet reached a turning point. She said Beijing had not imposed any deadline for ending the crisis ahead of National Day celebrations scheduled for October 1. And she said China had “absolutely no plan” to deploy People’s Liberation Army troops on Hong Kong streets. World leaders have been closely watching whether China will send in the military to quell the protests, as it did a generation ago in the bloody Tiananmen crackdown in Beijing.

Lam noted, however, that she had few options once an issue had been elevated “to a national level,” a reference to the leadership in Beijing, “to a sort of sovereignty and security level, let alone in the midst of this sort of unprecedented tension between the two big economies in the world.”

[…] She expressed deep regrets about her push to pass the bill. “This has proven to be very unwise given the circumstances,” she said. “And this huge degree of fear and anxiety amongst people of Hong Kong vis-à-vis the mainland of China, which we were not sensitive enough to feel and grasp.” [Source]

Reuters has also published a redacted transcript of Lam’s address, and The Guardian has posted several minutes of audio from the meeting.

At The New York Times, Kieth Bradsher reports on Lam’s remarks from a Tuesday morning press conference in which she stated that she would not be stepping down, and relays remarks from Hong Kong officials and Beijing advisors on Lam’s increasing frustration with her job and Beijing’s unwillingness to allow her to leave her post:

Senior Hong Kong officials and Beijing advisers have been saying for weeks that Mrs. Lam is deeply unhappy in the job, but that Beijing’s leaders will not allow her to resign even if she decides that she wants to do so.

[…] Lau Siu-kai, vice chairman of the Chinese Association of Hong Kong and Macau Studies, a semiofficial advisory body set up by Beijing, said: “After things settle down, there may be a reshuffle of the leadership team. But to do it now is seen by Beijing as a sign of weakness that would cause more riots to occur.”

[…] One of five demands by protesters has been that Mrs. Lam must resign and that a successor be elected through universal suffrage. In an audio recording of a closed-door meeting last week between Mrs. Lam and local businesspeople that was leaked to Reuters, Mrs. Lam is heard to say that she longed to resign.

But one key obstacle to her doing so is that she lacks an heir apparent to run this fractious, semiautonomous territory of China. Beijing also remains opposed to allowing any general election in which pro-democracy candidates could run. [Source]

CNN’s Julia Hollingsworth and Bianca Burton report further on Lam’s comments on Tuesday morning, where she reiterated that her choice to maintain her post was made by her own accord, and expressed disappointment that her closed-door comments had been published:

In a press conference on Tuesday, the Hong Kong Chief Executive emphasized that she had not tendered a resignation to Beijing, nor even “contemplated to discuss a resignation” with her mainland superiors.

“The choice of not resigning is my own choice,” she told reporters. “I told myself repeatedly in the past few months that I — and my team — should stay on to help Hong Kong and to help Hong Kong in a very difficult situation.”

“I’d rather stay on and walk this path together with my team and the people of Hong Kong,” she said.

When asked by CNN why the Chinese central government would not let her resign, Lam reiterated that she had never tendered her resignation to Beijing.

Lam added that she was “very disappointed” that her remarks — spoken last week to a group of business leaders — had been recorded and passed to the media. The conversation had been held under the understanding that participants could use any information divulged, but should not reveal the identity of the speaker or any other participants. [Source]

From the Hong Kong Free Press:

Last week, several high-profile democracy activists and lawmakers were arrested ahead of a rally mark the fifth anniversary of Beijing’s decision to impose limits on who could run for office in Hong Kong, which set off the 2014 Umbrella Movement in the city. The rally was canceled following the arrests. A leaked email shows that William Wong, head of a Hong Kong prosecutors’ group, has called for the city’s justice minister and chief prosecutor to educate the police about “reliability and honesty,” believing that they timed the arrests to affect the rally. The South China Morning Post’s Chris Lau reports:

In his email, Wong questioned the timing of the arrests – at times in emphatic terms – which came a day before a planned mass rally of the anti-government protest movement last Sunday.

“Police know very well that August 31 is a sensitive day and on August 30 they arrested … seven public figures,” he wrote.

Wong’s email to the senior justice officials continued: “When queried by the press, police openly denied that they did deliberately make the seven arrests before August 31. Do you believe what police said? As a matter of common sense, the general public do not. If this is an issue in the trial, no court or reasonable jury properly directed would believe what [the] police said.”

[…] He wrote: “I trust that police know that they are telling lies, but they may not be aware of the dire consequences in the long run of what they have done in damaging the legal system in Hong Kong which depends heavily on the integrity of the police.”

Police officials have denied that the arrests were timed to deter the planned protests – but Wong was unconvinced and doubled down on his accusations. […] [Source]