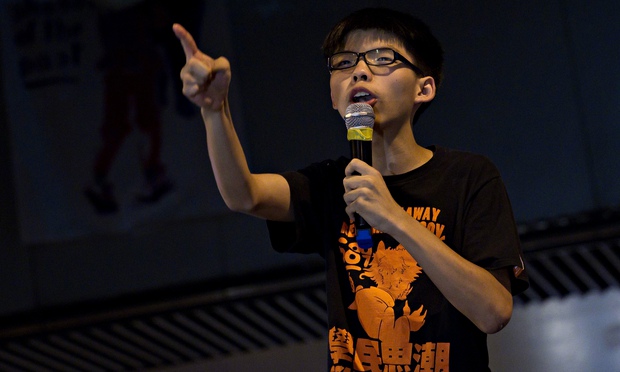 Amid ongoing protests in Hong Kong, police have arrested three pro-democracy lawmakers, two prominent activists, and the leader of the banned Hong Kong National Party, the most recent and highest-profile of the over 900 arrests so far since June. The arrests came ahead of a now cancelled march on Saturday to mark the fifth anniversary of Beijing’s decision to impose limits on who could run for office in Hong Kong, a move that set off the 2014 Umbrella Movement, in which Joshua Wong and Agnes Chow–the two arrested activists–served as student leaders. The New York Times’ Austin Ramzy and Ezra Cheung report on the arrests, and on additional measures that the Hong Kong and Beijing government have enacted to “establish order”:

Three pro-democracy lawmakers, Cheng Chung-tai, Au Nok-hin and Jeremy Tam were arrested Friday, according to the police, a legislative assistant and Facebook posts from their offices.

Joshua Wong and Agnes Chow, student leaders of the pro-democracy demonstrations in Hong Kong five years ago that presaged the current protests, were arrested on Friday morning, their political organization said. They were later released on bail. Andy Chan, who led the now-banned Hong Kong National Party, was taken into custody Thursday night at the Hong Kong airport, he said on Facebook.

The arrests were the latest in a dramatic week of events in Hong Kong, where tensions were running high after three months of protests touched off by widespread anger over legislation, since suspended, that would have allowed criminal suspects to be extradited to mainland China for trial.

[…] In addition to the arrests, Hong Kong’s chief executive, Carrie Lam, said the government was considering whether there were other measures the city could take to establish order; China sent in fresh troops to the territory; and the authorities denied permission for what was widely expected to be a well-attended demonstration.

[…] More than 900 arrests have been carried out since early June, but the detentions on Thursday and Friday stood out. The arrest of prominent activists during sensitive periods is a common tactic by the authorities in mainland China, but such an approach is highly unusual in Hong Kong, which has its own legal system and far greater protections for civil rights. [Source]

What's happened in the past 30 hrs:

Joshua and Agnes of Demosisto, arrested.

Joshua Wong was released from prison in June after serving one month of a two month sentence for his role in the 2014 protest movement. Wong and Agnes Chow were released on bail Friday evening. At CNN, Helen Regan, Angus Watson, Ezra Cheung, and Jadyn Sham note other Hong Kong arrests between Thursday and Friday, outline the most serious potential sentences, and note that the arrests could serve to further exacerbate tensions in the city:

The arrests could further inflame tensions in the city after an already tense week. Last Sunday, a Hong Kong police officer fired a live shot into the air during protests for the first time. Later in the week, Chief Executive Carrie Lam refused to rule out invoking emergency powers and a prominent protest organizer was attacked by masked men carrying baseball bats and knives.

[…] In addition to the arrests of Wong and Chow, outspoken pro-democracy politician Rick Hui was arrested on Friday. Hui was arrested Friday on suspicion of “obstructing the police officers in the performance of their duty.” The charge relates to Hui’s alleged participation in a rally in Sha Tin, in Hong Kong’s New Territories.

Chow, also 22 and a former Demosisto Legislative Council candidate, was charged with “inciting others to participate in unlawful assembly” and “knowingly participating in unauthorized assembly.”

The pair could face five years in jail if convicted of the most serious charge of “inciting others to participate in unlawful assembly.” [Source]

Elsewhere at The New York Times, Keith Bradsher analyzes news about the recent arrests and the lack of concessions offered to demonstrators as reflecting a “tactical escalation by China’s leaders to curb the recent street violence, but which could prolong the protests for many months”:

Officials in Beijing, along with the Hong Kong government that answers to them, have decided on a policy of stepped-up arrests of demonstrators, who would be publicly labeled the most radical of the activists, according to Hong Kong cabinet members and leaders of the local pro-Beijing establishment.

In interviews over the past two weeks, these local political figures stressed that China wants the Hong Kong police to carry out the arrests — not Chinese soldiers, whose intervention in the city’s affairs would be unprecedented.

[…] Beijing has also ruled out making concessions to the demonstrators, they said. With protest leaders also vowing not to back down, the officials acknowledged that the price of the strategy could be months of acrimony, possibly stretching into 2020.

[…] With China’s hard-line leader, Xi Jinping, dealing with a trade war with the United States, a strategy of attrition in Hong Kong could be seen as preferable to a rash approach that might risk spiraling into a major crisis.

But it is far from clear how much success the authorities will have with their strategy of arresting protesters, resisting concessions and delaying negotiations. The arrests have begun to draw criticism from around the world. […] [Source]

At Reuters, James Pomfret and Greg Torode offer evidence that Beijing is behind the Hong Kong government’s response to the movement, by looking to a report that Hong Kong Chief Executive Carrie Lam submitted earlier this summer on how the withdrawal of the controversial extradition bill that started the protests in June could serve to ease the political crisis:

Beijing’s rebuff of Lam’s proposal for how to resolve the crisis, detailed for the first time by Reuters, represents concrete evidence of the extent to which China is controlling the Hong Kong government’s response to the unrest.

[…] Lam’s report on the tumult was made before an Aug. 7 meeting in Shenzhen about the Hong Kong crisis, led by senior Chinese officials. The report examined the feasibility of the protesters’ five demands, and analyzed how conceding to some of them might quieten things down, the individuals with direct knowledge said.

In addition to the withdrawal of the extradition bill, the other demands analyzed in the report were: an independent inquiry into the protests; fully democratic elections; dropping of the term “riot” in describing protests; and dropping charges against those arrested so far.

The withdrawal of the bill and an independent inquiry were seen to be the most feasible politically, according to a senior government official in the Hong Kong administration, who spoke on condition of anonymity. He said the move was envisioned as helping pacify some of the more moderate protesters who have been angered by Lam’s silence.

[…] “They said no” to all five demands, said the source. “The situation is far more complicated than most people realize.” [Source]

At The Guardian, Ilaria Maria Sala reports that none of the high-profile activists arrested in this round have served as leaders in the current series of demonstrations by design, noting that the leaderless nature of the movement does not fit neatly into Beijing’s worldview:

None of them have had a high profile in the current political strife – it is a leaderless movement that has assumed as one of its recognisable slogans Bruce Lee’s motto of “being water”: adaptable, and mobile.

[…] In recent days Hong Kong has seen an increase in sabre-rattling from China, which has been putting on display its military power near the border. An armed intervention still seems most unlikely, but instilling the fear of it is seen as a useful strategy. And then, after the arrest of close to 1,000 people through the course of the summer, on Friday came the seemingly inexplicable arrests of activists who have kept a rather low profile. This gives us a clue.Ever since Beijing has had to admit it cannot control the information flooding out of Hong Kong, it has reshaped the events into something it could spin: a small group of “black hands” acting behind the scenes and with international support has tried to sow discord into Hong Kong. The “black hand” theory is an old Soviet trope still shaping the Chinese Communist party’s worldview. With Friday’s arrests we can see that it not only uses it as propaganda, but also actually believes it.

This worldview cannot conceive of a leaderless movement: there have to be saboteurs behind it, whether they are maliciously undermining China’s Five Year Plan, or inciting disaffected people in Hong Kong to ask for a responsive government. That is how the Tiananmen protests ended, too: with a multi-year campaign to unmask and arrest the “black hands” that had caused it, refusing to take into account that the popular sentiment expressed by the millions who took to the streets could be genuine and spontaneous. […] [Source]

“This is just the beginning… I would expect in the next 3-4 weeks, Hong Kong may invoke the Emergency Regulations Ordinance giving them fairly sweeping powers to arrest people. I’m not talking about dozens, but hundreds, maybe the low thousands.” + more than 900 arrests already https://t.co/fwsyETYcHS

Freshly released on bail, Joshua Wong took to Twitter to express fury at the round-up:

1. Two months after I got released from prison, I’m arrested again. Even though it’s a heavy cross to bear, I expected that I would be arrested and prosecuted in this movement again.

2. Compared with the hardships of our companions, some of them may got beaten up by the police, may got sexually assaulted, may got shot in eye, everything I’m facing is really insignificant.

Hongkonger, together we stand! We shall never surrender!

3. I was arrested and prosecuted this morning in route to my community work outside South Horizons MTR Station. I am accused of inciting, organizing and participating unauthorized assembly on 21 June, protest outside Police HQ in Wanchai.

4. @chowtingagnes is arrested at home this morning. She is accused of inciting and participating in unauthorized assembly. Both of us were detained in Police HQ and we are not certain when they are released.

5. We are furious about large-scale arrest on the day before 31 August. It is completely ridiculous that the police target specific prominent figures of social movement in the past and framing them as the leaders of the anti-extradition bill protests.

6. The 12-week long protests is prestiged as leaderless yet We once again reiterate that Demosisto has never taken up any leading role during the movement. White terror is a lame and old-fashioned tactic deployed by the police to please BJ.

7. It is completely ridiculous that the police target specific prominent figures of social movement in the past and framing them as the leaders of the anti-extradition bill protests.