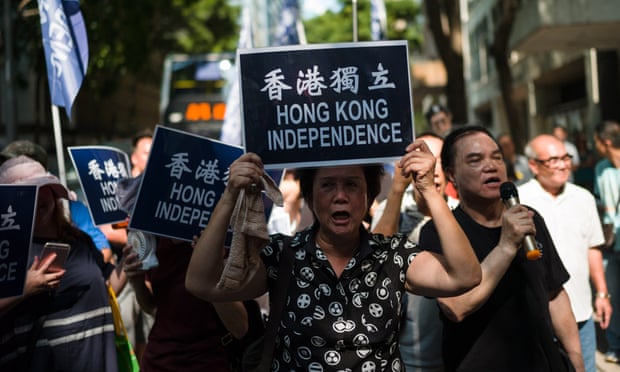 Hong Kong has banned the pro-independence Hong Kong National Party (HKNP) in an unprecedented move that has added to mounting concerns over Beijing’s encroaching influence on the semi-autonomous region. At The Guardian, Lily Kuo reports:

On Monday, Hong Kong’s security bureau announced it had upheld a police request to ban the Hong Kong National Party (HKNP), a well-known but small group that promotes the city’s independence from China.

“I hereby order that the operation or continued operation of the Hong Kong National Party in Hong Kong to be prohibited,” a notice from the security minister said on a government website.

It is the first time since Hong Kong was handed back to China by Britain 21 years ago that a political party has been banned. Under the terms of the handover, semi-autonomous Hong Kong is meant to enjoy freedoms unseen on the mainland, including freedom of expression, association, and elections.

However, the space for political dissent has shrunk in the face of an increasingly assertive China under President Xi Jinping. Beijing resists any challenges to its sovereignty in Hong Kong. […] [Source]

Now that the HKNP has been “prohibited” from operating, anyone who associates with the group could face a fine and a jail term of two to three years. The move follows Hong Kong authorities’ July proposal to ban the HKNP under the colonial-era Societies Ordinance, which allows the government to prohibit any organization from operating “for the interests of national security or public safety, public order or the protection of the rights and freedom of others.” Andy Chan Ho-tin, the convener and leader of the HKNP, earlier this month submitted a response to authorities contesting the potential ban. Last month Chan was criticized by Hong Kong and Chinese officials after he delivered a speech decrying Beijing’s attempts to “annex and destroy” Hong Kong at the Foreign Correspondents Club. The Guardian’s Kuo also reported that Chan was awaiting legal counsel before commenting on a decision to appeal the ban.

BBC News reports on Hong Kong leaders’ justification for the ban, and how the island factors into Beijing’s increasing worries over national sovereignty:

The city’s Secretary for Security John Lee said the group had spread “hatred and discrimination against mainland Chinese”.

[…T]he move to outlaw the party has given the group and its leader Andy Chan international prominence.

[…] China is extremely – and increasingly – sensitive about what it says are questions of national sovereignty.

Beijing’s main focus is Hong Kong and the self-ruling island of Taiwan. In Taiwan’s case, China’s position is straightforward: Beijing sees Taiwan as a breakaway province that rightfully belongs to the mainland.

In the case of Hong Kong, the situation is blurry. The city is part of China but its special status and freedoms can be seen as indirectly undermining Beijing’s tough hand on the mainland. [Source]

TIME’s Casey Quackenbush notes that this is the first time the Societies Ordinance has been used to ban a political party since the 1997 handover, and reports on how mounting concerns over Beijing’s increasing influence in Hong Kong led to the founding of the HKNP:

This flexing of an infrequently practiced injunction to outlaw a party — the first such ban since Hong Kong ceased to be a British colony — has renewed concerns over Beijing’s growing influence. Hong Kong has long feared the erosion of freedoms promised under a framework called “One Country, Two Systems.” But Chinese leader Xi Jinping has made it clear that separatist movements will not be tolerated.

[…] Fears of Beijing’s growing interference in the former colony have intensified in the aftermath of the mass pro-democracy uprising in 2014. Known as the Umbrella Revolution, the movement saw protesters and activists occupy central streets for two and a half months, propelled by a perceived erosion of Hong Kong’s unique freedoms, which are not enjoyed on the mainland.

HKNP was founded in the wake of the movement in 2016. Chan was among a slew of nascent Hong Kong politicians barred from elections that year after they refused to sign a pledge saying Hong Kong is an inalienable part of China. [Source]

The Hong Kong Free Press’ Kris Cheng notes worry in Hong Kong that this move represents restriction of the region’s freedom of assembly, and relays a response to that concern from Security Chief John Lee, the official who ordered the ban:

Speaking to reporters on Monday after the announcement, Lee explained the reasons for the ban. He said the Hong Kong National Party’s agenda advocating independence “is in strict contravention to the Basic Law and also against national security.”

Lee said the party has indicated that it will use all means to achieve its goal, including using force.

“While its convener has on some occasions indicated they would use non-violent means to achieve the goal, I cannot ignore the fact that the Hong Kong National Party has repeatedly advocated that it would use all methods including the use of force and also encouraging its supporters to use force,” he said.

When asked if he was pressured by Beijing officials into banning the party, Lee said: “I made the decision myself. Any other things are not taken into consideration.” [Source]

At The Guardian, Verna Yu argues that while the banning of a party calling for greater democracy in the region will do little to crush the pro-independence movement, it does risk radicalizing Hong Kong’s increasingly disaffected youth:

On the surface, the government’s action against independence advocates seems rather successful. An opinion poll last year suggested that the percentage of Hong Kong residents supporting independence fell from 17.4% in 2016 to 11.4% in 2017. The number of young people aged between 15 and 24 who support independence fell even more sharply: from 39.2% to 14.8%.

[…] But the authorities would be wrong to be complacent, because discontent and the sense of alienation from China continues to deepen. A survey in 2017 indicated that as many as one in three in Hong Kong wanted to emigrate. An opinion poll in June this year showed that only 2.9% of local young people aged between 18 and 29 identify themselves as Chinese and 3.6% as broadly Chinese – a huge drop from 16.5% and 31.6%, respectively, in August 1997 – one month after the handover, when the poll first started.

[…] When the government bans groups, banishes young people with a “heretical” agenda from entering politics and bars public discussions, it is shutting down legitimate channels for rational discussion.

While more advocates of Hong Kong independence are barred from expressing their views or sent to jail , they are being made into modern-day martyrs, poised to inspire and radicalise another generation of young people. [Source]