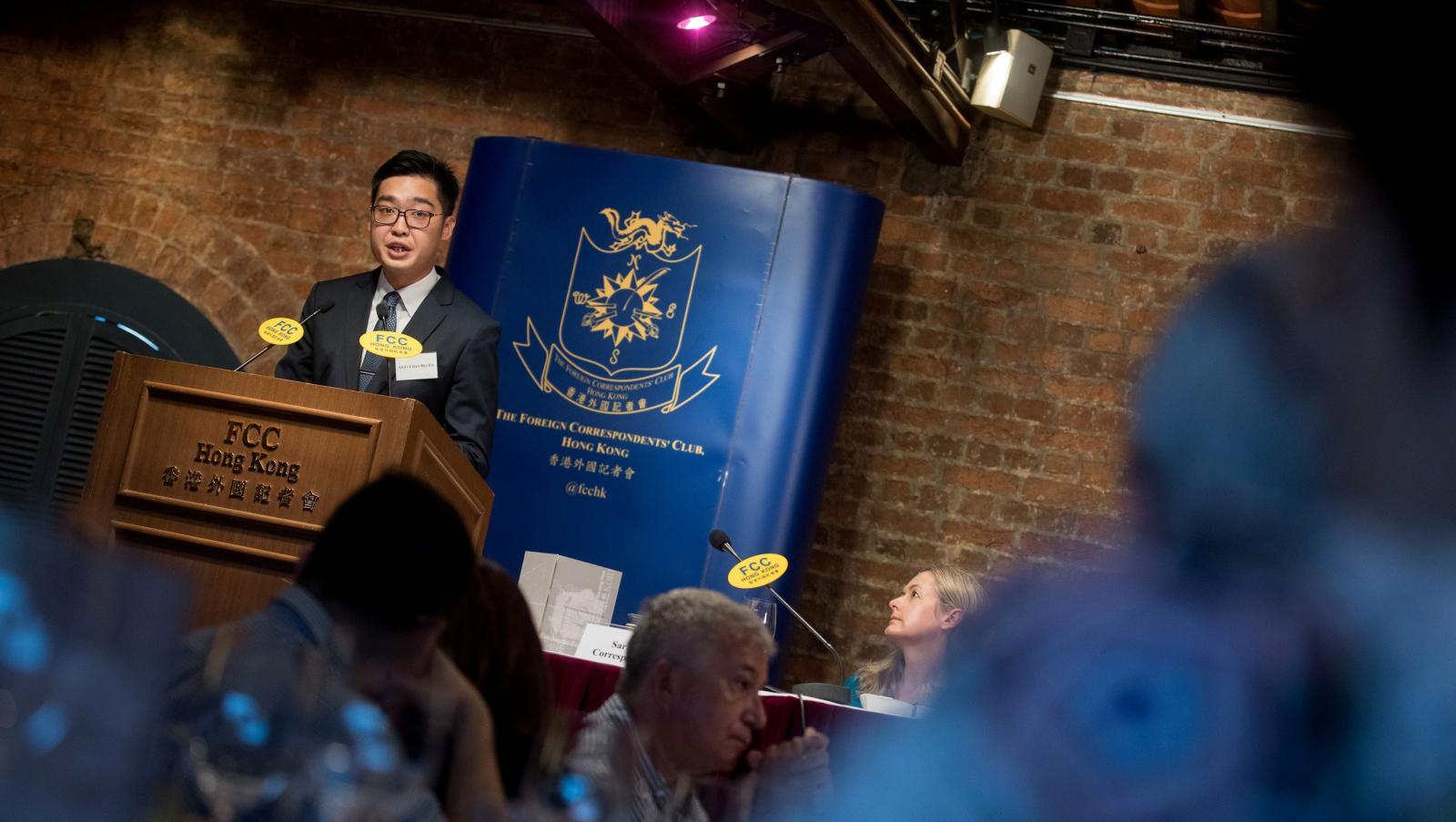 Andy Chan Ho-tin—a Hong Kong independence advocate and convener of the pro-independence Hong Kong National Party (HKNP), a political party that regional security officials are attempting to ban—delivered a biting speech in front of the Foreign Correspondents Club (FCC). In the speech, which Beijing requested be cancelled and current and former HK officials criticized the FCC for hosting, Chan decried China’s attempts to “annex and destroy” Hong Kong, stating, “The cry for Hong Kong independence is therefore a cry against colonial invasion.” The AP reports, noting that Chinese requests and Hong Kong officials’ criticism has again put a spotlight on Beijing’s encroaching influence in the semi-autonomous region:

“No country will allow foreign institutions to invite separatist forces on their own land to advocate splitting the country and inciting violent resistance,” the statement said. During his talk, Chan said he condemned violence in political action.

The 75-year-old FCC has previously hosted politicians and newsmakers, including pro-Beijing speakers, at its clubhouse in central Hong Kong. The club says it believes its members and the public have the right “to hear the views of different sides in any debate”.

The perception that Beijing is reneging on its promise of semi-autonomy, and eroding Hong Kong’s free elections and freedom of speech, is helping nurture a generation of young activists calling for greater autonomy, if not outright independence.

Huge pro-democracy protests erupted in 2014 in response to the decision by China’s ruling Communist party to retain the right to effectively pre-screen candidates for Hong Kong’s leadership. […]

Read more about the 2014 protests known collectively as the “Umbrella Movement,” via CDT.

Prior to the event, former Hong Kong Chief Executive CY Leung stated that the FCC’s promotion of a pro-independence advocate was akin to “promot[ing] racism, anti-semitism, or Nazism,” and current Chief Executive Carrie Lam said that the FCC’s move to host Chan was “regrettable and inappropriate.” After Chan delivered his speech, China’s Foreign Ministry stated “Hong Kong is China’s Hong Kong, the FCC Hong Kong is absolutely not a place outside the law. We urge the FCC Hong Kong to reflect on itself, fix its mistake, take action to follow the laws of China and the Hong Kong Special Administrative Region, respect the feelings of 1.4 billion Chinese people including the seven-odd million Hong Kong compatriots.”

At CNBC, Kelly Olsen relays more of Chan’s statements at the FCC, and more on the organization’s defense of their decision to host Chan despite the protest:

In his speech, Chan said his party has been “demonized as some sort of extremist group” by China for advocating independence and that he has come under harsh surveillance by authorities.

“In reality, what the National Party is chasing after is no different from what many Hong Kongers wish for: the dream of democracy,” Chan said.

In comments likely to anger the central government, Chan said that Hong Kong, with its distinctive language, culture and history, is coming under the same pressure to assimilate with the nation as minority groups in the mainland.

He cited the far western region of Xinjiang, which he referred to as East Turkestan, as well as Tibet. East Turkestan is a political term that sometimes refers to Xinjiang and was also used in a short-lived East Turkestan Republic in the 1930s. [Source]

Olson also noted that of the protesters gathered outside of the FCC during the speech, the majority appeared to be anti-independence. The Hong Kong Free Press has provided a video and full text transcription of Chan’s speech.

At the Hong Kong Free Press, Tom Grundy reports that the FCC website was down throughout Tuesday due to “suspected malware,” and notes an emergency fire call that turned out to be a false alarm just prior to Chan’s speech:

“The FCC’s website is undergoing maintenance to repair what we suspect is malware affecting the site, and currently cannot be accessed. We hope it will be operating normally soon,” an announcement on the club’s Facebook page said.

When HKFP visited the FCC’s homepage earlier on Tuesday, it appeared that a blockchain platform known as VALUS had been installed on the site.

Hours before the talk, the fire brigade responded to an emergency call at the FCC’s Central premises. The club, however, said that there was no emergency, and the call was likely a hoax.

In a statement, the club thanked the Fire Services Department “for its prompt response to what we believe to have been a hoax call from outside the building announcing that there was a fire or fire alarm activation at the club shortly before the event began. There was in fact no fire and no alarm had been activated.” [Source]

At the South China Morning Post, Jeffie Lam provides a brief summary of the path that brought Andy Chan Ho-tin onto the political scene, describes the difficult situation the HKNP places other local pan-democratic politicians in, and explains Beijing’s anxiety over the party and calls from within the Hong Kong government for his party to be banned:

Some time between 2015 and 2016, Chan and his clutch of 10 friends distributed leaflets to the crowds each Saturday evening and took turns speaking into their portable microphones, their voices drowned out by the din. But they were undeterred.

Those were the heady days after Occupy, the 79-day street demonstration to call for political reform. The movement had ended with no closure and many student participants, spirits high, were determined to carry the fight forward. Chan was among them.

[…] “What would be more influential than forming our own party and running for elections? Someone had to break this taboo, I felt,” Chan told the Post in a recent interview.

[…] In March 2016, Chan called a press conference at a Tuen Mun factory office of about 1,000 sq ft – an impressive size given he was the only one present – to announce the setting up of the HKNP. He pledged to use “whatever effective means” to achieve their cause.

[…] Pan-democrats and legal scholars have slammed the police’s case, arguing strenuously that the move would put Hongkongers’ freedom of association and expression at risk.

[…] For some pan-democrats, the proposed ban is a move designed to force them to denounce pro-independence groups unequivocally and draw a firm red line not just on action but, more worryingly, on speech. [Source]

Elsewhere at the South China Morning Post, Peter Kammerer shares his opinion that both sides overreacted to Chan’s speech—that Chan is not a threat to Chinese rule, and that Beijing’s attempt to discredit Chan and his speech may have allowed him undue celebrity:

You’ve got to be bemused by the fuss over Hong Kong independence advocate Andy Chan Ho-tin’s talk at the Foreign Correspondents’ Club. Beijing has turned a nobody into a somebody by making him out to be a pariah and provided the freest of publicity to a boozy place to meet friends and contacts. Neither deserve the attention. Wrapped around it all is an outcry that the special administrative region’s freedom of speech and press are being trampled on.

Let’s get some basic facts in order. Chan and the Hong Kong National Party he founded aren’t a threat to Chinese sovereignty, as nobody takes them seriously or ever will. The idea that Hong Kong can stand on its own feet is fantasy.

Surely those foreign policy experts from the Chinese foreign ministry learned something about the debacle over Joshua Wong Chi-fung and his pro-democracy activism? Guys, it’s simple: unnecessarily making a martyr out of somebody attracts international attention and, the next thing you know, he’s on the cover of Timemagazine and the haters are out in force condemning you. Do it in front of a gaggle of foreign journalists and the outcome is as predictable as the rising sun. […] [Source]

Read more about Joshua Wong and his camp of young Hong Kong democrats—whose activism some have deemed worthy of a Nobel Peace Prize nomination, via CDT.