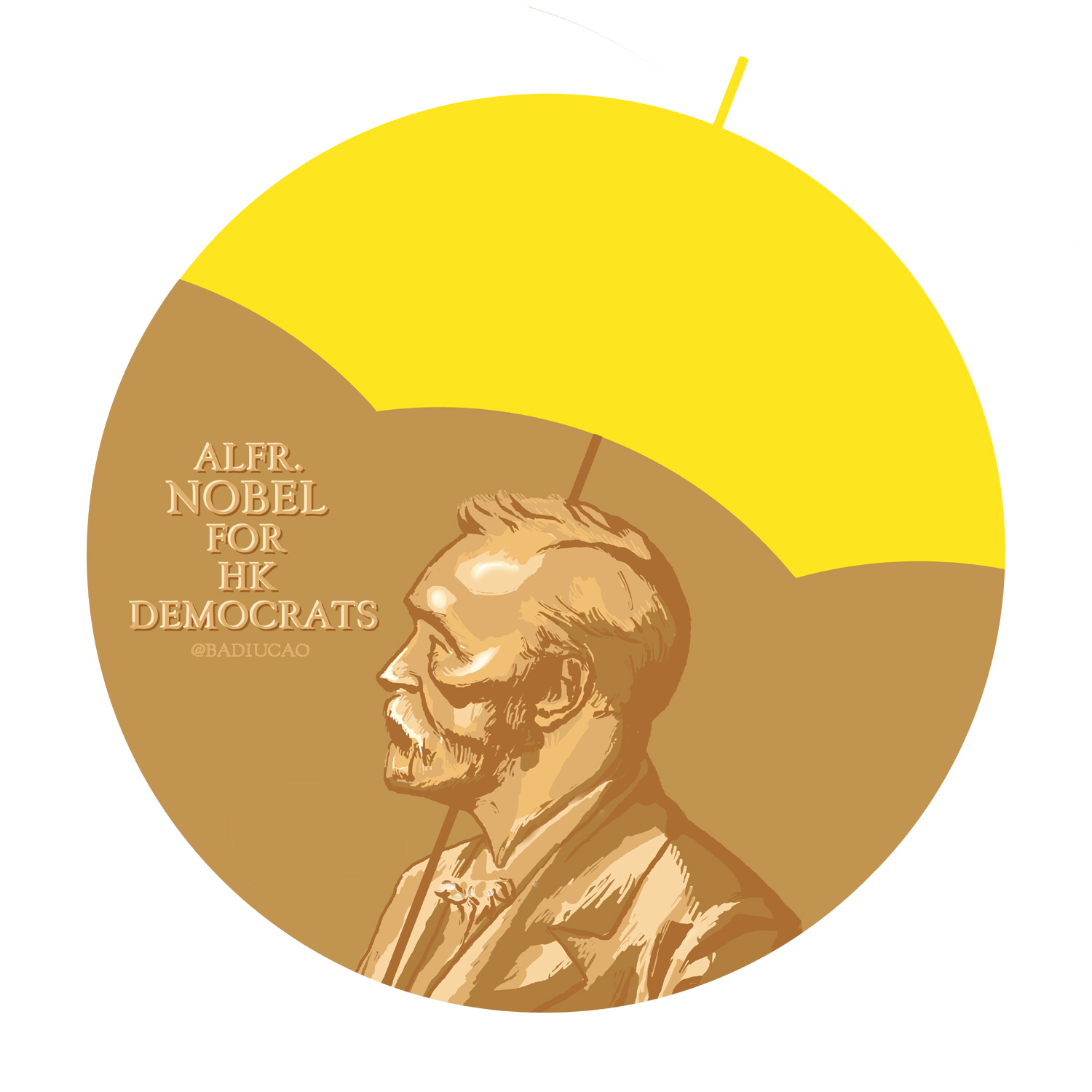 Joshua Wong, Alex Chow, and Nathan Law, three young democracy campaigners and leaders of Hong Kong’s 2014 “Umbrella Movement,” were each given 6-8 month prison sentences for “unlawful assembly” last week. The three had last year been handed community service for their roles in the 2014 movement, but were given prison time by an appeals court after Hong Kong’s Beijing-backed government pushed for harsher penalties. Their sentences followed similarly escalated sentences for 13 other protest participants, and come ahead of more expected sentences for others involved in Hong Kong’s democracy movement. 20 activists face charges of contempt of court today, among them the recently-jailed Joshua Wong. The sentenced activists have collectively become the youngest group of political prisoners in Hong Kong since the 1997 handover.

After Bari Weiss proposed Wong, Chow, and Law’s nomination for the Nobel Peace Prize in a New York Times’ op-ed last week, CDT resident cartoonist Badiucao expresses his support by reimagining a Nobel medal in the spirit of the 2014 Umbrella Movement:

Nobel for HK Democrats, by Badiucao for CDT.

Weiss’ proposal came as the deciding committee prepares to begin nomination season next month, after thousands in Hong Kong took to the streets to demand the release of the young democrats last weekend and prominent political figures around the world signed open letters with the same demand. Some pro-democracy Hong Kong politicians and human rights activists hailed the creation of democratic Hong Kong political prisoners as a watershed moment. In the New York Times, Weiss argued:

In 2014, the courageous trio helped lead what become known as the Umbrella Movement — an enormous political protest defending Hong Kong’s freedoms from an increasingly aggressive Beijing. Like Andrei Sakharov, Vaclav Havel, Aung San Suu Kyi and so many dissidents that came before them, the men were hit with a bogus charge (“unlawful assembly”), were found guilty and served out their punishments last year.

But today, Hong Kong’s Department of Justice decided that those penalties were too lenient.

[…] The implications of their imprisonment are monumental. Since Britain handed over jurisdiction of its former colony to China 20 years ago, the city has operated under the notion of “one country, two systems.” That increasingly appears to be an empty slogan. “The outcome isn’t just a travesty for these three peaceful pro-democracy activists or free speech — it’s also a painfully clear sign that Beijing’s political dictates are eating away at Hong Kong’s judiciary, an institution essential to the territory’s autonomy,” Sophie Richardson, the China director of Human Rights Watch, told me.

[…] The battle these young people are waging is far bigger than their futures — or even than Hong Kong itself. They are among some of the most prominent leaders pushing an authoritarian China to honor its international and political commitments. Can a handful of Davids hold a Goliath to account? The imprimatur of a Nobel Prize would help. [Source]

The Nobel Prize was little help to jailed Chinese activist Liu Xiaobo, who won it in 2010 as he was serving an 11-year prison sentence for “inciting subversion,” and died in custody while undergoing treatment for advanced stage liver cancer last month.

Not all agree with Weiss’ call for a Nobel for the jailed Hong Kong democrats. In an opinion essay published by the South China Morning Post, Michael Chugani disagrees with the characterization of the jailed activists as prisoners of conscience, and also takes issue with democratic-minded intellectuals, Hong Kong politicians, and street protesters attacking the appeals court’s decision. In another opinion piece at the SCMP, Alex Lo warns that blaming the recent sentences on Beijing’s reassertion of control is a “dangerous leap,” pointing towards the deepening divide among the city’s populace instead.