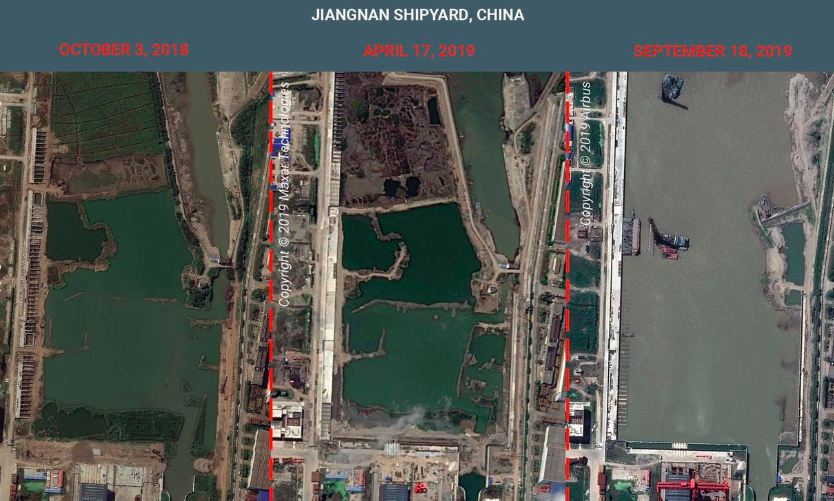 Satellite images of a Chinese military shipyard taken over several years show that China is rapidly building up large-scale infrastructure to support expansion of its naval fleet with the construction of carriers and other large surface warships. The extensive building works are part of longstanding efforts by the Chinese government to modernize and expand its military, and suggest that it is set on building not just one full-sized aircraft carrier but a carrier “factory.” Reuters’ Greg Torode and Michael Martina report:

The images of the Jiangnan shipyard outside Shanghai were taken last month and provided to Reuters by the non-partisan Center for Strategic and International Studies (CSIS), building on satellite photos it obtained in April and September last year.

Noting a series of pre-fabricated sections, bulkheads and other components stacked nearby, CSIS analysts say the hull should be finished within 12 months, after which it is likely to be moved to a newly created harbor and wharf before being fitted out.

The vast harbor on the Yangtze River estuary, including a wharf nearly 1 kilometer long and large buildings for manufacturing ship components, is nearly complete. Much of the harbor area appeared to be abandoned farmland just a year ago, according to earlier images CSIS analyzed.

[…] “We can see slow but steady progress on the hull, but I think the really surprising thing these images show is the extensive infrastructure buildup that has gone on simultaneously,” said CSIS analyst Matthew Funaiole.

“It is hard to imagine all this is being done for just one ship,” he added. “This looks more like a specialized space for carriers and or other larger vessels.” [Source]

Also contributing to China’s naval ambitions is a plan to lease the island of Tulagi in the Solomon Islands. A deal was signed last month between a Solomon Islands provincial government and the state-owned China Sam Enterprise Group, giving the company development rights to the entire island. Given the strategic location of the island in the South Pacific and its surrounding waters that serve as a natural harbor, some fear that China may turn the island into a military base. Damien Cave at The New York Times reports:

The renewable 75-year lease was granted to the China Sam Enterprise Group, a conglomerate founded in 1985 as a state-owned enterprise, according to corporate records.

A copy of the “strategic cooperation agreement,” obtained by The New York Times and verified by two people with knowledge of the deal, reveals both the immediate ambitions of China Sam and the potential — just as in Vanuatu — for infrastructure that could share civilian and military uses.

Signed on Sept. 22, the agreement includes provisions for a fishery base, an operations center, and “the building or enhancement of the airport.” Though there are no confirmed oil or gas reserves in the Solomons, the agreement also notes that China Sam is interested in building an oil and gas terminal.

These are just the explicit possibilities. The document also states that the government will lease all of Tulagi and the surrounding islands in the province for the development of “a special economic zone or any other industry that is suitable for any development.”

The provincial governor who signed the deal, Stanley Maniteva, could not be reached for comment. Noting that laws and landowner rights would be respected, he told local reporters this week that the agreement had not been completed. [Source]

The Solomon Islands broke diplomatic ties with the government of Taiwan days before the Tulagi deal was struck. The island nation of Kiribati followed suit the same week, leaving Taiwan with only 15 diplomatic partners worldwide that officially recognize it as an independent nation.

In addition to naval power, the Chinese government is also upgrading its air force with the addition of Sukhoi Su-35 Flanker-E jets from Russia. The jets, which entered service with People’s Liberation Army Air Force last year, may give China an edge in the event of conflict over Taiwan and the South China Sea. From The National Interest:

“The Su-35 is a multi-purpose fighter jet capable of air combat and precision strike against land and surface targets,” Senior Colonel Wu Qian, Director General of the Information Office of China’s Ministry of National Defense, said during a April 26, 2018 press conference. “Currently, the aviation troop units of the PLA Air Force have been armed with the Su-35 fighters.”

With the jets now in service, the Su-35 would significantly bolster Chinese forces operating over the South China Sea or the Taiwan Straits. Indeed, Beijing has in recent days been conducting exercises in the region near Taiwan, which it considers to be a breakaway province. “Recently, the PLA Air Force dispatched multiple types of warplanes to carry out real combat training exercises in the airspace over the sea to further enhance the capability of safeguarding China’s national sovereignty and territorial integrity,” Wu said. “The island the PLA warplanes patrolled around is, of course, China’s Taiwan Island.”.

[…] If push comes to shove, the Su-35 could feature prominently in any Chinese attempt to subdue Taiwan. The Flanker-E is arguably the PLAAF’s most capable fighter apart from the Chengdu J-20 stealth fighter, which is not likely to fully operational yet even if it has achieved some level of operational capability. Particularly, if the Su-35 is armed with long-range air-to-air missiles such as the very long range PL-15, it could be used to attack American aerial refueling tankers and other support aircraft such the E-3 AWACS that are crucial for conducting air operations over the vastness of the Pacific. [Source]

The Center for a New American Security’s Elsa Kania noted on Twitter that the Chinese military is intensifying its focus on electronic warfare techniques:

@EBKania: PLA innovation has begun to enter the experimentation and training stage. Just yesterday, the PLA announced they are adding a new “brand” of training involving electronic warfare.

The PLA Air Force has just announced the launch of a new ‘brand’ in their training, ‘Qingdian’ (擎电), an exercise that concentrates on electronic warfare capabilities. https://t.co/xP3Ufkbi7f

At The National Interest, Robert Farley looks at some of the possible scenarios that could lead China and the United States to go to war:

Fifteen years ago, the only answers to “How would a war between the People’s Republic of China and the United States start?” involved disputes over Taiwan or North Korea. A Taiwanese declaration of independence, a North Korean attack on South Korea, or some similar triggering event would force the PRC and the US reluctantly into war.

This has changed. The expansion of Chinese interests and capabilities means that we can envision several different scenarios in which direct military conflict between China and the United States might begin. These still include a Taiwan scenario and North Korea scenario, but now also involve disputes in the East and South China Seas, as well as potential conflict with India along the Tibetan border.

The underlying factors are the growth of Chinese power, Chinese dissatisfaction with the US-led regional security system, and US alliance commitments to a variety of regional states. As long as these factors hold, the possibility for war will endure.

[…] If the history of World War I gives any indication, the PLA will not allow the United States to fully mobilize in order to either launch a first strike, or properly prepare to receive a first blow. At the same time, a “bolt from the blue” strike is unlikely. Instead, a brewing crisis will steadily escalate over a few incidents, finally triggering a set of steps on the part of the US military that indicate to Beijing that Washington is genuinely prepared for war. These steps will include surging carrier groups, shifting deployment to Asia from Europe and the Middle East, and moving fighter squadrons towards the Pacific. At this moment, China will need to decide whether to push forward or back down. [Source]